Some of this year’s Ireland Under-18 stars showed their eye for the try-line during the opening round of the PwC IRFU Under-18 Girls Interprovincial Championship.

Winger Amy Larn, who won European bronze with the Ireland U-18 Sevens team last month, landed a hat-trick of tries as defending champions Leinster burst out of the blocks with a 66-0 bonus point win away to Ulster.

Navan out-half Abby Moyles impressed from the tee, with seven successful kicks from eight, while captain Sadhbh McGrath and hooker Maebh Clenaghan put up a stubborn resistance for a valiant Ulster side.

Connacht skipper Éabha Nic Dhonnacha starred with a 14-point haul, including an outstanding individual try from the halfway line, in their 39-17 bonus point victory over Munster in Galway.

Cahirciveen youngster Ellie Cournane caught the eye for Munster with a brace of tries, one an intercept effort early on and the second a well-taken effort from a cross-field kick by co-captain Caitriona Finn.

While four members of the IRFU Women’s National Talent Squad made their senior debuts for Ireland in Japan in recent days, the 2022 U-18 Interpros could act a springboard for more of the current WNTS crop to progress to Test level.

Two cracking clashes await next Saturday as Leinster and Connacht, the two first round winners, go head-to-head at Energia Park, and Munster and Ulster face off at Musgrave Park.

Following a strong build-up to the tournament, it was no surprise to see Munster seize an early lead. Iveragh and Tralee winger Cournane pounced on a Nic Dhonnacha pass to run in an intercept try from 45 metres out.

The opportunity arose, closer in, for Ballina lock Sarah McCormick to absorb a tackle and stretch out to ground the ball, cutting the gap to 7-5 with seven minutes on the clock.

Good work in the lineout, particularly from co-captain Saskia Wycherley, saw Munster threaten through their well-organised maul before 16-year-old out-half Finn picked out Cournane with a superb cross-field kick for her second try.

Connacht stormed back with number 10 Clara Barrett and Maher increasing their influence, the latter continuing to gain ground with her carries as Munster were forced back on the defensive. 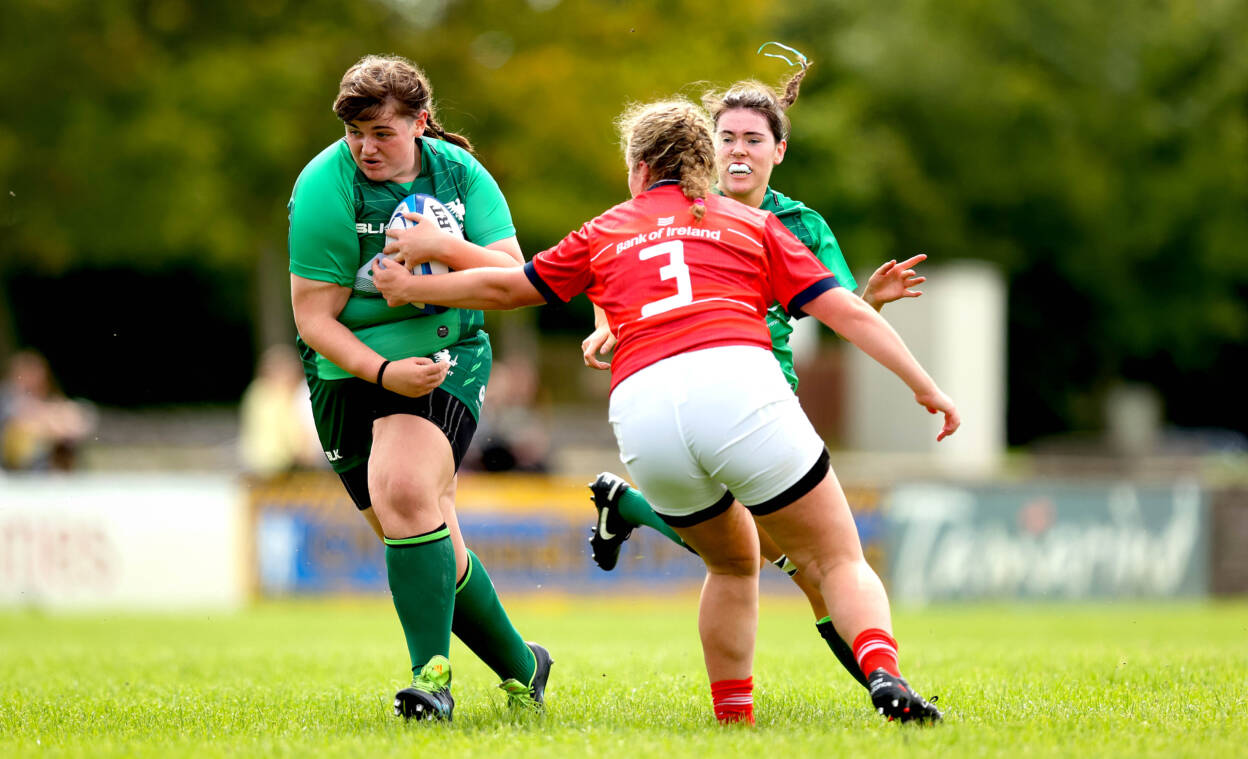 A series of penalties ended with Munster full-back Ellen Boylan seeing yellow, and hooker Ellen O’Toole took a quick tap to burrow over for a try wide on the left.

Craig Hanbserry’s side took the lead for the first time soon after, Munster’s restart not going ten metres and off the scrum, well-timed passes from Karly Tierney and Barrett created the opening for their third try and a 17-12 advantage.

They released the onrushing Hannah Clarke from 45 metres out, and the Tuam/Oughterard full-back had the pace to beat Finn’s tackle on the outside and score to the right of the posts.

Connemara talent Nic Dhonnacha converted impressively and then weighed in with an outstanding individual try for the bonus point as Munster really paid the price for that sin-binning.

On her home club pitch at Corinthian Park, the promising centre picked up possession on halfway, darting around Emily O’Regan and towards the left wing. A clever dummy and burst of pace took her in between two defenders and she went over untouched from the 10-metre line. 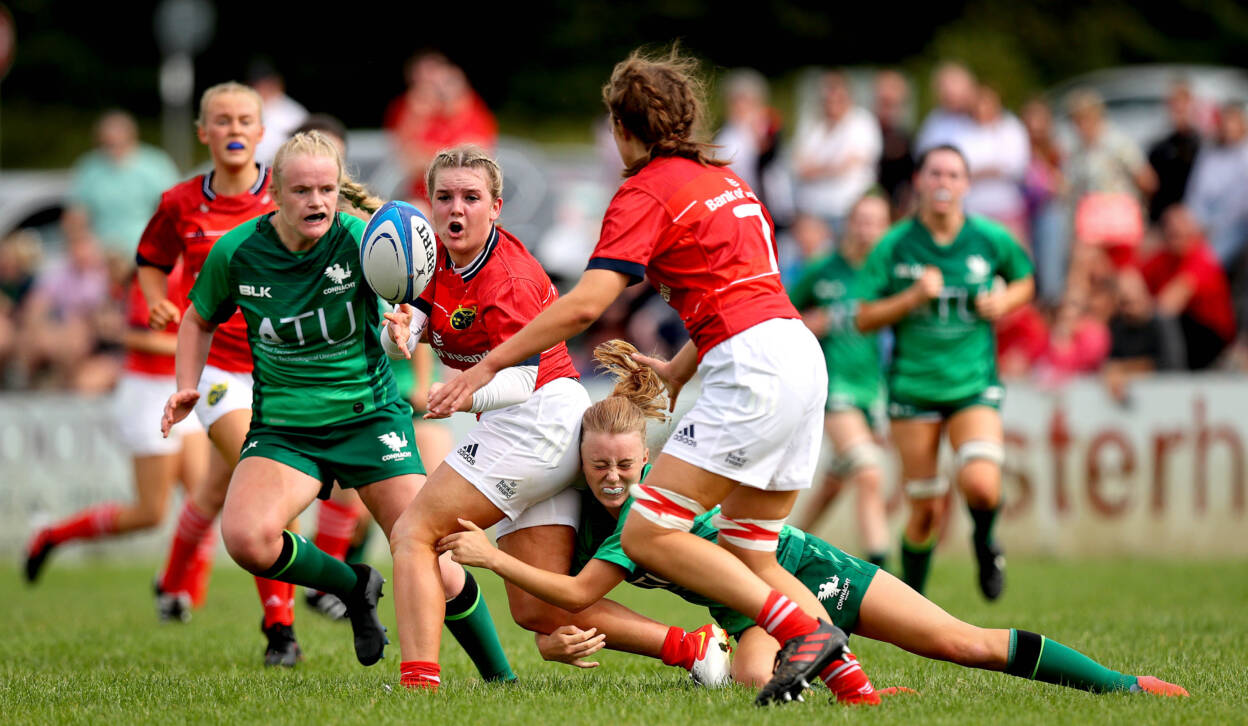 Kate Flannery, another of Munster’s Ireland contingent, spearheaded a late purple patch for the visitors, with Connacht replacement Laura Hastings promptly sin-binned for a deliberate knock-on in her own 22.

A yellow followed for Connacht centre Molly Boote, who appeared to have won a hard-earned turnover, but the westerners held onto their 22-12 lead with Munster left frustrated by a couple of costly knock-ons.

There was ferocious competition at the breakdown on the resumption, and as Connacht pressed for another try, Boylan denied them with a well-judged tackle to bundle Emily Foley into touch.

The westerners maintained their presence in the Munster 22, aided by Ailish Quinn’s turnover penalty, and were rewarded in the 46th minute when Mila Sotoparra did really well to get the ball down under pressure from two covering defenders.

Finn forced a turnover penalty to end a Connacht attack that was sparked by a chip-and-collect from Nic Dhonnacha, before Boote returned the favour, spoiling what was a terrific initial break from Finn who got past three defenders.

There was a flurry of late scores, Barrett sniping over from close range with six minutes remaining. Nic Dhonnacha converted to widen the margin to 20 points.

Munster replacement Niamh McCarthy hit back, charging down the short side of a ruck to crash over in the right corner. Fittingly, Nic Dhonnacha (pictured below) had the final say, number 8 Tierney supplying the assist after her own good work at the breakdown. 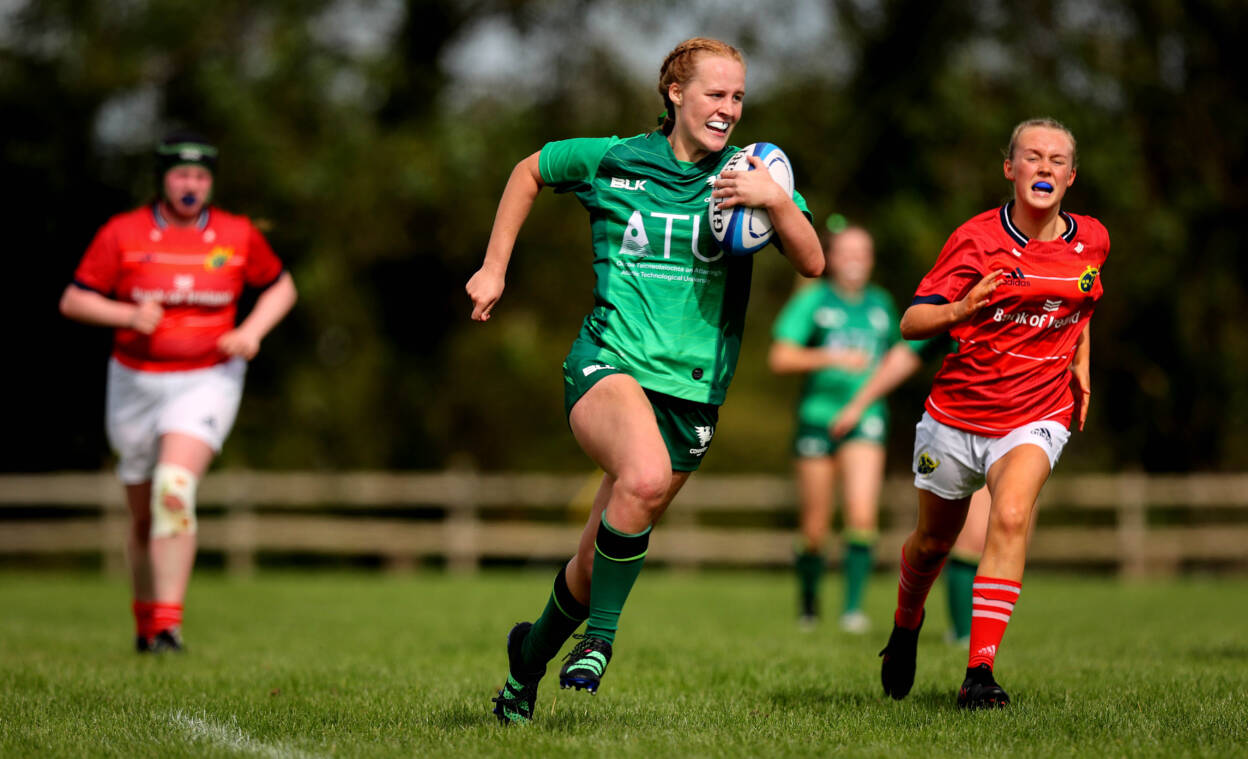 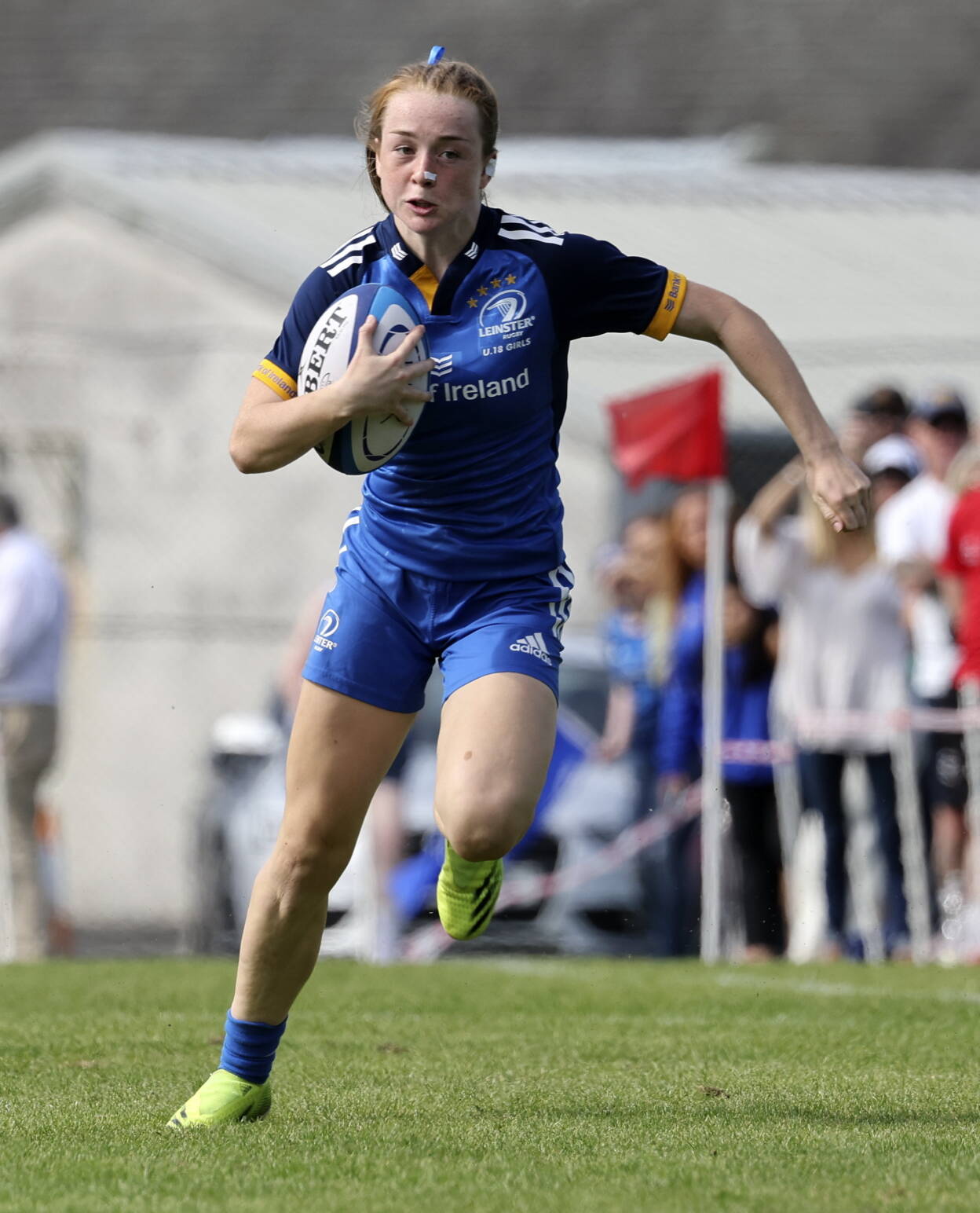 Coached by Mick Bolger, Leinster look like the team to beat again this year after launching their Interprovincial title defence with a 10-try triumph over Ulster in Belfast.

Athy flyer Larn (pictured above) swiftly made her mark, showing her timing in defence to force a lineout before getting on the end of a second-minute attack to cut inside Katie Gilmour and open the scoring.

Moyles, who had a fine day with boot, converted and was at the heart of Leinster’s next attack, her well-directed kick through putting pressure on full-back Gilmour who conceded a penalty.

A further infringement from Ulster closer to the posts was played through by Leinster whose high-tempo play and accuracy opened up the way for Prudence Isaac to offload brilliantly out of a tackle for Robyn O’Connor to score.

After Moyles expertly clipped over the conversion from out wide for 14-0, Gilmour did well to intercept a Larn pass and further good work in defence from industrious number 8 McGrath and Cara O’Kane won a relieving penalty. 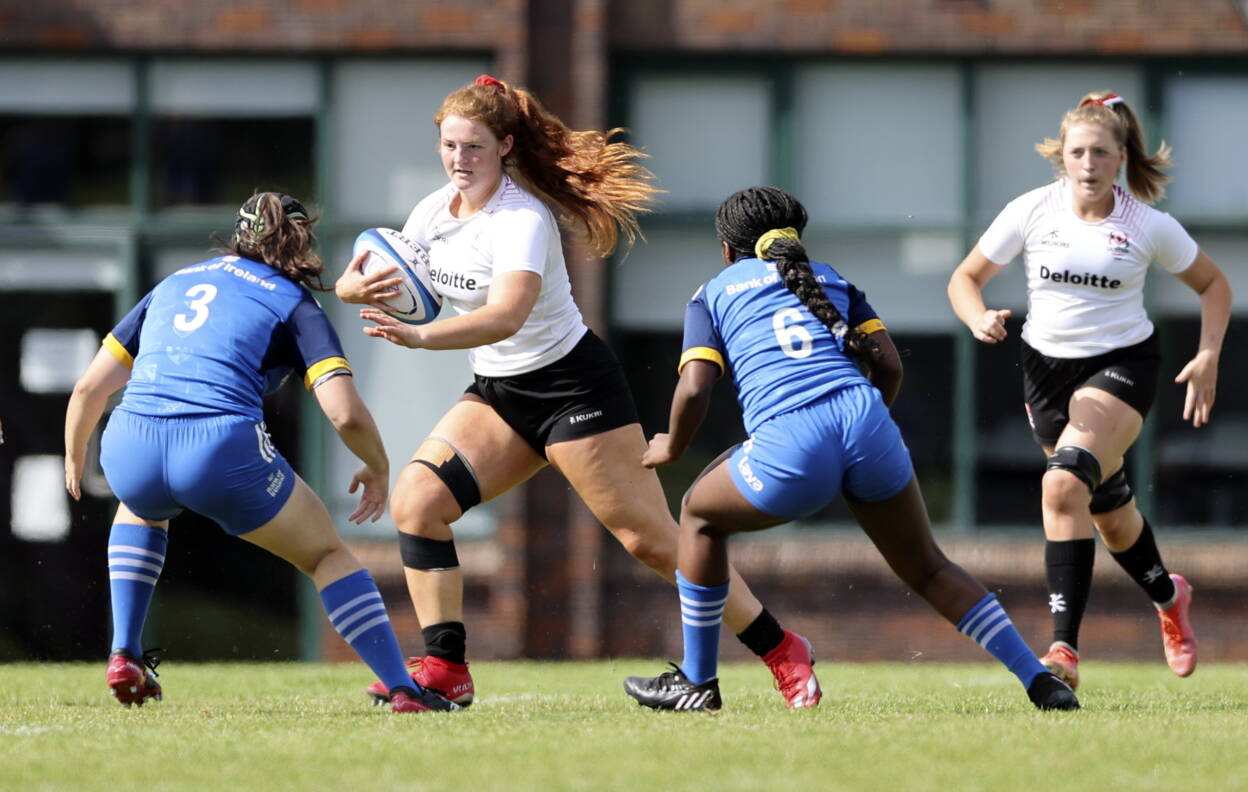 The hosts missed touch, though, and Leinster punished them in ruthless fashion, earning another penalty advantage before powerful Portlaoise lock Koren Dunne thundered onto Jade Gaffney’s pass to score from 10 metres out.

Moyles’ conversion was followed by a decent spell for Ulster, but they were unable to build on a promising lineout maul and needed two turnovers, both dug out by City of Derry hooker Clenaghan, to break up Leinster momentum.

The blue wave came again on the 20-minute mark, a slick first phase move off a scrum propelling Larn in between two defenders and she finished crisply under the posts for Moyles to make it 28-0.

Tara O’Neill, McGrath and Jessica Kelly stood tall for Ulster, the latter pair making very good metres with their carries, only for them to then lose crucial ground when Isaac got the decision at the breakdown. 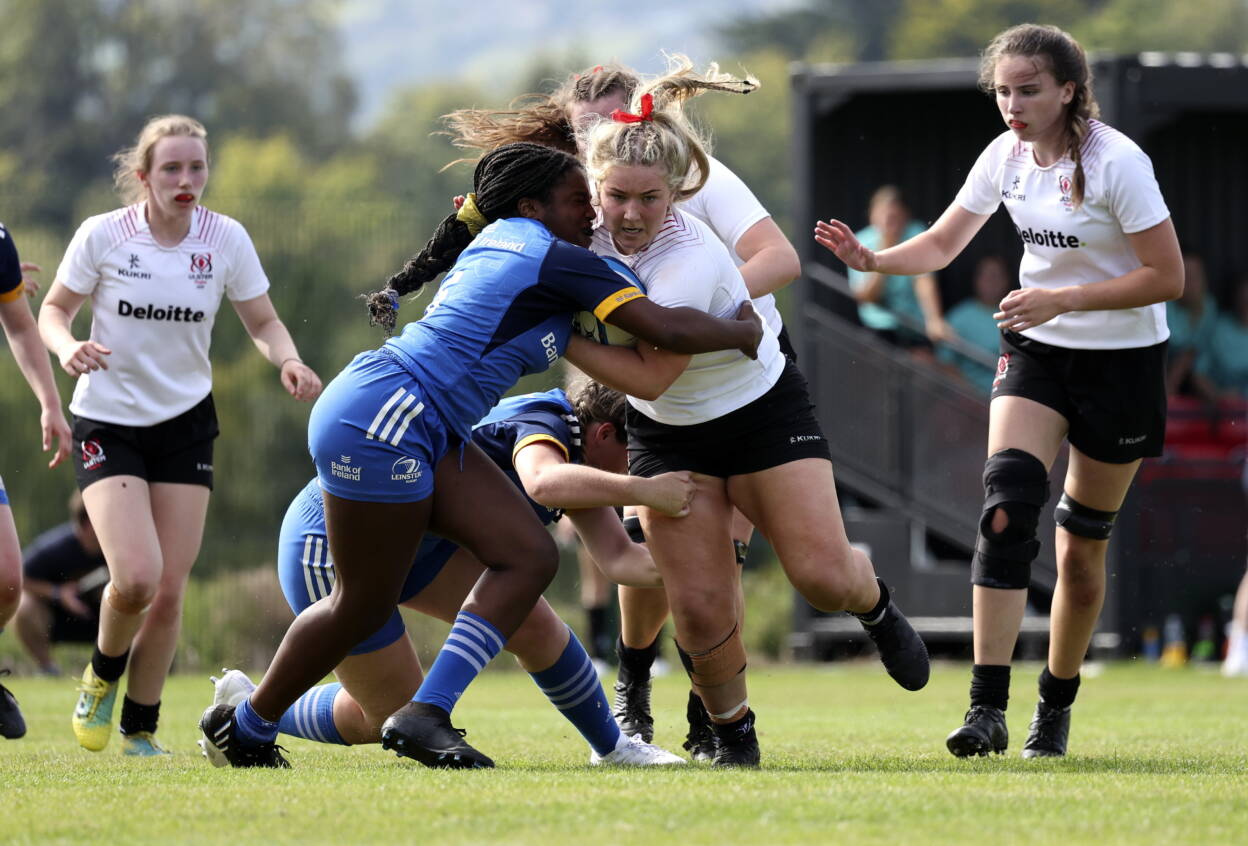 The Arklow flanker was next over the try-line, trailing a break from a scrum by Amy O’Mahony and being the beneficiary of Gaffney’s well-timed pop pass off the ground to run in a seven-pointer.

With Leinster going wide from an Isaac turnover, Larn completed her hat-trick by racing clear up the left touchline and in behind the posts. Moyles’ conversion bounced back off the right hand post.

Trailing by 40 points at the turnaround, the Ulster girls managed to repel Eva Sterritt early in the second period, winning a relieving penalty as they looked build their way back downfield.

However, a subsequent turnover had Leinster hammering away again and Dunne proved unstoppable once she built up a head of steam, rampaging over just to the left of the posts for Moyles to make it 47-0.

Advancing on the back of a couple of penalties, Ulster threatened a breakthrough with McGrath and prop Sophie Barrett to the fore, yet Leinster back rowers Orla Wafer and O’Mahony both made key defensive plays at the breakdown.

Into the final quarter, the visitors strung together three more tries, the first of them seeing Sterritt gobble up a loose kick and combine with her centre partner Cara Martin to send replacement Emma Brogan over from close range. 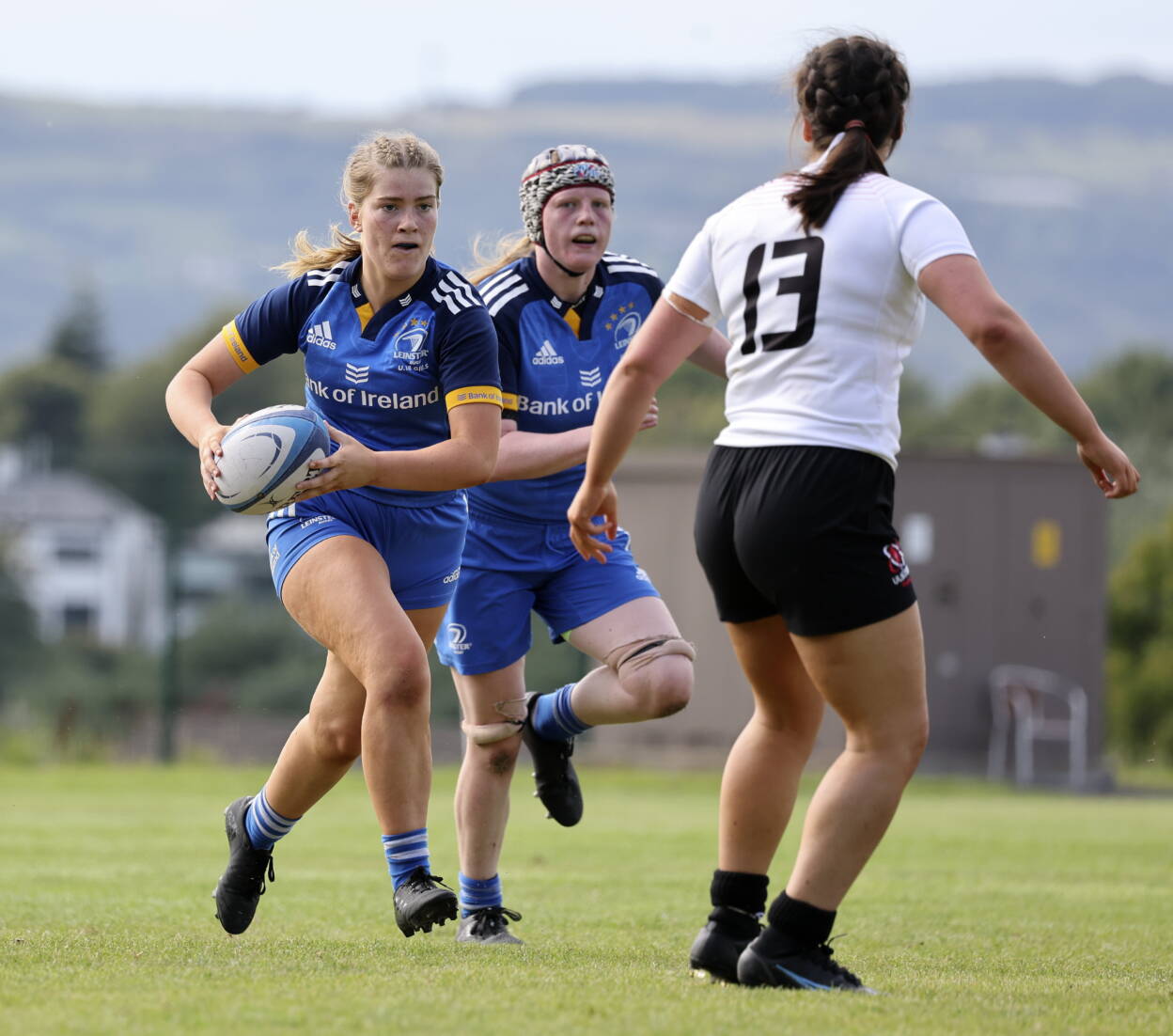 Clenaghan continued to get through Trojan work, locking onto a ball at the breakdown to earn Ulster a clearing penalty but it was only a brief respite.

Sterritt, the Ireland U-18 Sevens captain, got in on the try-scoring act, showing her strength to score out wide past two defenders after an earlier break had seen her go close.

Replacement Jess Griffey tagged on the tenth try in the final play, charging through from a ruck with Ulster stretched by full-back O’Connor’s slaloming run in the build-up. The extras were knocked over by Abaigeal Connon.