Ulster Rugby’s Head of Rugby Operations and Recruitment, Bryn Cunningham, has provided an insight into the ‘Return to Rugby’ protocols now in place at their High Performance Centre, following the return of the professional squad to Kingspan Stadium earlier this week.

New signings, Ian Madigan and Alby Mathewson, have also arrived at the club, which the Head of Rugby Operations and Recruitment is delighted about.

“We are happy to have retained the majority of our squad going into the new season. We also have two new additions in Alby and Ian , who have both arrived and settled really well.

“It’s difficult for new guys settling into a new environment, especially when that environment is completely unusual. Normally they would be meeting a variety of people before their first day, but with them being assigned to groups for the first couple of weeks, they haven’t been able to do that. However, they have fitted in really well and are already working hard. They are both really excited to be part of the squad moving forward; and I have no doubt they will be made to feel welcome.”

There has been a huge amount of work that has gone on behind-the-scenes in the last few weeks and months. In terms of the stadium itself, we looked at how we could set it up to create what is called a ‘performance bubble’. This is what each of the four provinces was tasked with by the IRFU.

“There are a lot of protocols in place to make sure that we are compliant. We have a really good set-up here at Kingspan Stadium, which lends itself to a fairly comfortable one-way system. We set it up a couple of weeks prior to our first day back to make sure we were compliant with everything we needed to be.

“In terms of entry to the stadium, the performance bubble is cordoned off to anybody who is not on the essential list. That list contains the professional players, and performance staff – plus some staff from the branch office, who have to follow all the same guidelines and protocols as the performance group.

“Players and staff have completed a variety of different training modules from the IRFU and World Rugby before coming back onto the premises, and a traffic light system is in operation to allow them to come back in for training.

“We also carried out PCR testing last week on all members of the essential group. Once we received confirmation of zero positive results, and everyone had completed the training modules, it allocated them an ‘amber’ status which cleared them to arrive for training.

“Following on from this, everyone has to complete a daily questionnaire before arriving at the check-in desk at the stadium. We can assess the questionnaires, as a monitoring group, to ensure no answers raise any issues. If that does happen, there is an alert system built-in, and a number of key staff are made aware via email to deal with it appropriately.

“If players and staff pass the questionnaire, a scanner will do a temperature check with a facial recognition scanner – so there’s no cross-contamination or touching of this equipment – at the entry point.” 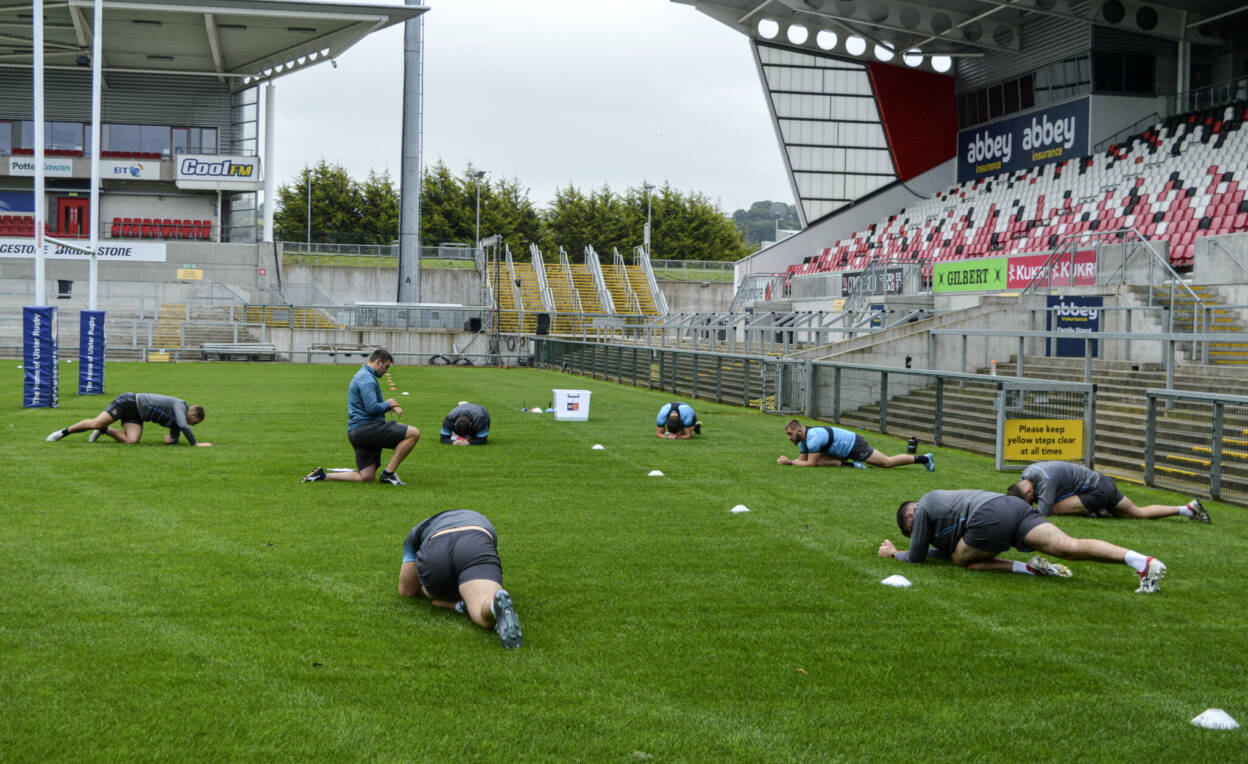 Cunningham stresses there are firm directions and timings in place for the training groups to participate in on-pitch sessions, followed by gym work and Watt bike training.

“This week, we had groups of seven players and one member of staff working together. They go through the various stages, while socially-distancing, and cleaning anything that is touched along the way, particularly in the gym. Everything they use from bars to dumbbells are cleaned down after every use. After the gym, they move to the Watt bike area in the afternoon, before getting into their cars and heading home.”

Cunningham is particularly pleased with how smoothly the first week gone and puts this down to the meticulous planning to get the stadium facilities ready beforehand.

“The first week has gone really well. It’s a bit of an unknown for everyone with challenges for us all. Thankfully all the work that was completed before we arrived meant it flowed seamlessly. We have a stocktake at the end of each day to see if we need to make any changes and mitigate the risks any further. It’s been really well-received by the player group, in particular, because they are looking forward to getting back into some form of training.

“It’s been very positive ‘Return to Rugby’ so far – we have had no red flags or issues. We will be adding more players as group sizes increase slightly going into next week, and that will throw-up more challenges, but we are well-prepared and have the facilities to accommodate.”

The focus for Cunningham, the coaches, and the squad will now switch to preparing for a return to the Guinness PRO14 on the weekend of 22/23 August.

“We need to make sure the stages we go through put us in the best position to play competitive rugby. In a contact sport like rugby, players need a number of weeks’ training at a high intensity – and those stages will come – but for now, the focus is on individual work, fitness work, speed work and gym work.

There is no passing of balls at this stage; and that is a tough period for players who want to get into game-orientated setup as soon as possible. That will come shortly, and the players will be excited to move through the stages. Everyone will have a keen focus on being ready for those matches on 22/23 August.”