The Ireland Men's Sevens squad received their match jerseys on the eve of the tournament in Dubai.

After making his Ireland Under-20 debut during last summer’s Under-20 World Championship in Argentina, Aaron O’Sullivan‘s burgeoning career will hit another significant landmark on Thursday as he wins his first Ireland Sevens cap in Dubai.

The 19-year-old has been named in Anthony Eddy‘s final 12-man squad for the opening leg of the 2019/20 HSBC World Rugby Men’s Sevens Series, as the Ireland Men’s Sevens make their eagerly-anticipated debut appearance as a core team in Dubai.

Leinster Academy back O’Sullivan entered the Sevens programme earlier this year and having earned selection for the annual Elche tournament last month, has maintained his place in the squad for this weekend’s Dubai Sevens, which will see the Ireland Men’s and Women’s sides compete side-by-side on the World Series for the first time.

Eddy’s side open their campaign against USA at The Sevens Stadium on Thursday evening (6.12pm local time/2.12pm Irish time), before facing Australia and Scotland in further Pool B outings on Friday.

“It’s going to be unbelievable to make my Sevens debut in a city like Dubai,” O’Sullivan told IrishRugby.ie on the eve of the tournament. “It’s brilliant to be travelling around the world and I’m lucky enough to be part of this team.

“After a long pre-season and a few days of training here, I’m just buzzing to get out on the pitch with the lads.”

Having been involved with Noel McNamara’s Ireland Under-20s and the Leinster ‘A’ side in recent seasons, O’Sullivan believes Sevens has really helped improve a number of facets of his game in a short space of time.

“I was injured a lot last year so I’ve really enjoyed this programme and I feel like my rugby has come on a lot,” he says.

I’m lucky enough to be coached by Anthony and all the backroom staff and I’m just really glad to be here and pulling on the green jersey.

O’Sullivan’s family will fly over to Cape Town next week for the second part of this World Series double-header, but for now all the focus for the Ireland Men’s Sevens is on their debut tournament.

After three intense days of preparations in the desert, the squad head into Thursday’s opener brimming with excitement and confidence as they look to make a major impression on the World Series having earned the golden qualification ticket in Hong Kong last April. 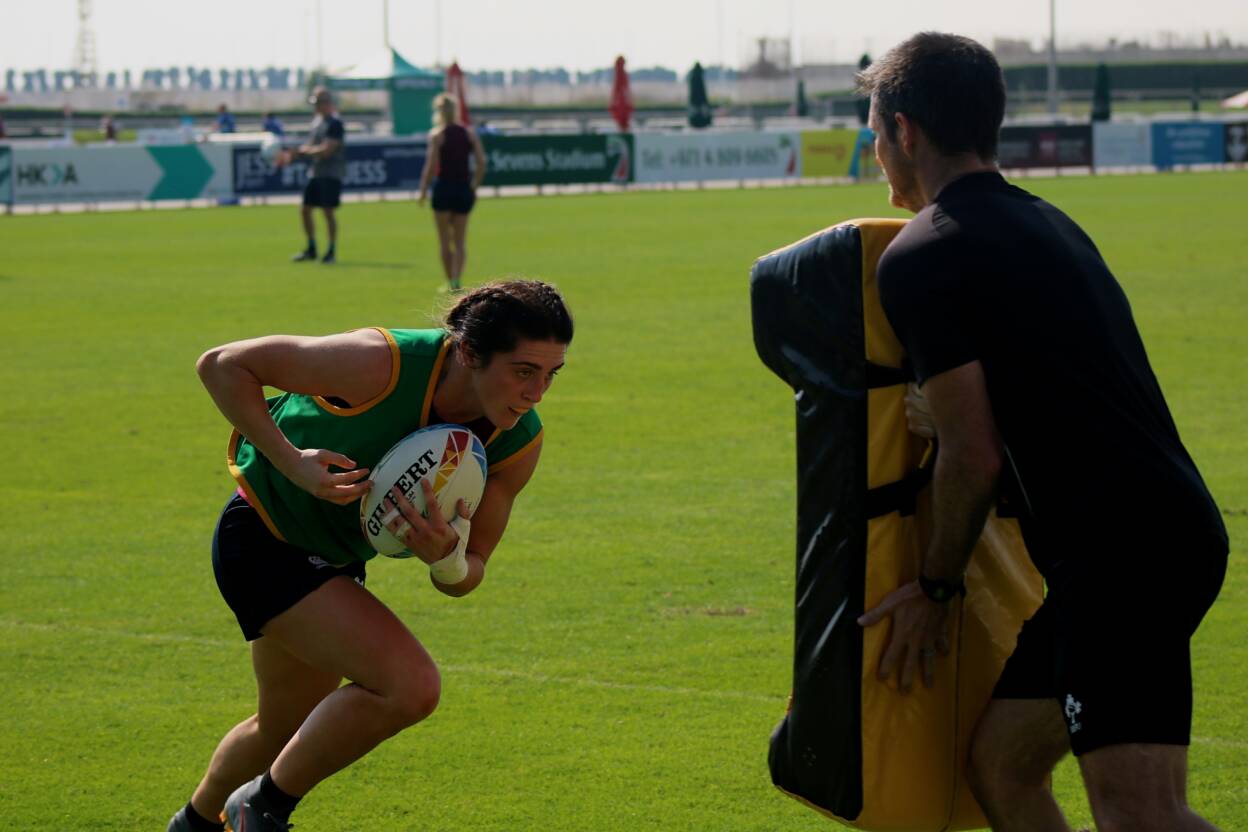 Ireland Women, meanwhile, open the Dubai Sevens when they take to the field against Spain on Thursday afternoon (2.50pm local time/10.50am Irish time) for the start of their second tournament of the season following an eighth-place finish in Glendale in October.

Stan McDowell‘s side completed their Captain’s Run at the stadium this morning and the Women’s Sevens Head Coach has finalised his 12-player panel, with Katie Fitzhenry and Amee-Leigh Murphy Crowe co-captaining the team in the absence of the injured Lucy Mulhall.

“The excitement starts to build towards that, and there will be a little bit of nerves of course, but the girls have prepared well and they’re looking forward to the occasion.”

All the action from Dubai will be streamed live on the World Rugby website, while you can keep-up-to-date with the progress of the Ireland Men and Women throughout the tournament via the Irish Rugby social media channels and IrishRugby.ie.