Rory Best returns to captain the Ireland team to play England at Twickenham on Saturday (kick-off 3pm – live on Sky Sports Action/Main Event), with several players making their first starts of the season.

There are seasonal bows for back rowers Peter O’Mahony, CJ Stander and Josh van der Flier, who dons the green jersey for the first time since his groin injury against France in March. In all, head coach Joe Schmidt has made twelve personnel changes and one positional switch. 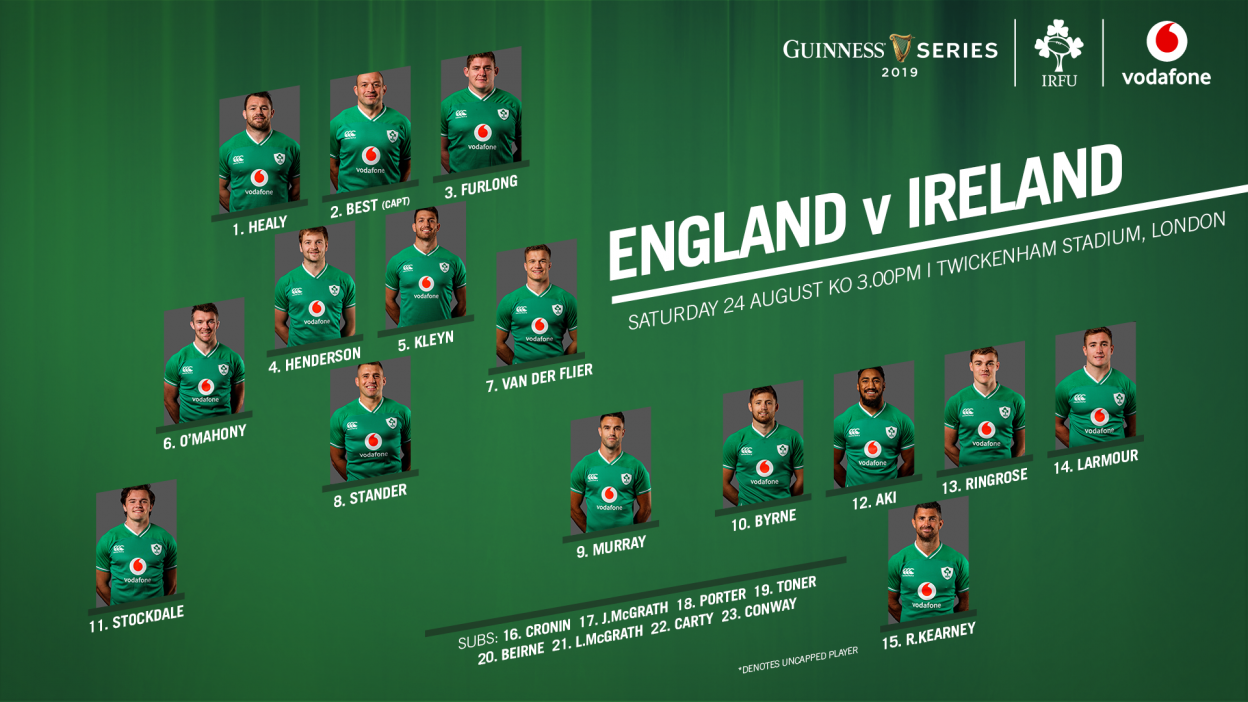 Leinster’s Ross Byrne will make his first international start at out-half, having previously featured off the bench against Italy and the USA during the 2018 GUINNESS Series. The 24-year-old combines at half-back with the returning Conor Murray.

Garry Ringrose, the third player retained from the starting XV against Italy, renews his centre partnership with Bundee Aki from the final round of the Guinness Six Nations, while Rob Kearney and Jacob Stockdale, a try scorer on his last visit to Twickenham, are restored to the back-three alongside Jordan Larmour.

Jack Carty, who took over from the injured Joey Carbery against Italy two weeks ago, is named on the bench along with Luke McGrath and Andrew Conway, the man-of-the-match in the 29-10 victory over the Azzurri.

Sean Cronin is set for his first outing of the season as replacement hooker, with the other forward reserves – Jack McGrath, Andrew Porter, Devin Toner and Tadhg Beirne – having all played during the GUINNESS Summer Series opener earlier this month.

Head coach Joe Schmidt commented: “Ross has trained really well and it’s not his debut, he’s had time with us before so that we’ve got a lot of confidence in him anyway and I think he built his way through the season.

“I thought he was maybe not as impressive as Jack (Carty) early in the season, and I think those two have become really important to us. Joey (Carbery) has done well this week. Johnny (Sexton), he’s fine, but he missed a bit of time with his thumb so he;’s a little bit behind and we know how well he plays for us.

“We don’t feel that he needs a lot of time with the experience that he’s got. So, for us, the guys that need the time are probably Ross and Jack and they’ve got the opportunity to do that this weekend, that they’ll share a bit of time, I’d say, in the middle.”

He added: “Saturday is a Test match against an old foe and they will be up for it. England have had two Test matches already. A lot of our players haven’t played yet. They have a little bit of an advantage there. They have freshened up a bit, they had a couple of days off at the start of the week.

“They are probably a little bit ahead of us in terms of their preparation but, your timing, you want to make sure that you periodise it right so that we are on an upswing by the time we get to that September 22 game (against Scotland).

“So an August 24 game comes a distant second. If we’re carrying a little bit of fatigue in the legs on Saturday, I’ll accept that. We want to be really competitive but if this last eight days (in Portugal) is good preparation for September 22 then that’s what counts most.”