It was a bittersweet day for Ulster’s Luke Marshall on Saturday as the fit-again Ireland international made a try-scoring return to action after ten months out of action.

The Ballymena man, who suffered an ACL injury all the way back in May of 2018, came back into the province’s matchday squad for the Heineken Champions Cup quarter-final defeat to Leinster at the Aviva Stadium and did not miss a beat, crashing over for a 64th-minute try in an excellent late cameo from the bench.

Indeed, if things had panned out differently, it could have been a fairytale return after his score in the final quarter drew Dan McFarland’s men level at 18-all. However, it was defending champions Leinster who went on to claim a hard-fought 21-18 victory, a brilliant Ulster performance just not quite enough to book their first European semi-final since 2012.

“Obviously I got injured back in May last season against the Ospreys and I was pretty disappointed that I was going to be out for a while,” said Marshall afterwards. “But that’s rugby, these injuries come to everyone and you work hard and get through them.

“I got some good advice from the likes of Marcell (Coetzee) who has been in this position and a few other guys just saying, ‘enjoy it, enjoy being back, do not force it, no one is expecting anything’. It was about keeping the expectations low. I thought I was going to be a lot more nervous. I enjoyed it, I enjoyed the occasion.

“The travelling support from Ulster coming down the road, I am not sure what the figures were but it looked as it was 50-50 support in the crowd and the noise was brilliant. It is up there with one of the big occasions.

“It was bittersweet for me. Great getting back out on the pitch and great getting back on such a big occasion, obviously the other side of it is that we did not complete the task and are out of the competition now. I’m still pretty pleased to get back fit, but wish it could have been in a different fashion.”

Despite the gut-wrenching defeat, Ulster left Dublin with their heads held high after their best European run in five years. Marshall, the strong-running centre, has been admiring the squad’s improvement from the sidelines in McFarland’s first season at the helm. 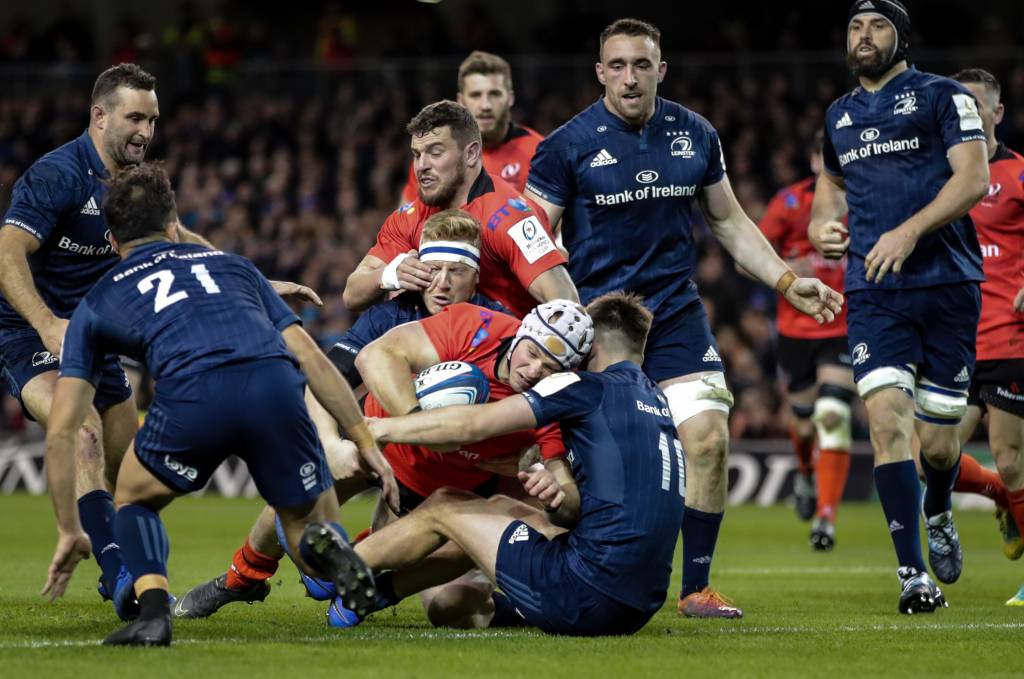 “To see how far we have come as a squad and being able to watch it from the sidelines, there were some great games this year,” he continued. “To beat Racing at home, and the Scarlets home and away, and even some of our league games, beating sides away which we would not have done over the last few years, it shows how much we have grown as a squad.

“I think if this (Leinster) game was last year we probably would have ended up losing it by 20 points, we would have just went out the gate once Leinster got in the ascendancy. But we stayed in the fight and kept coming back at them and there’s definitely a lot to be proud of.

“Not only will it give them a taste of it, but they will learn from the experience and hopefully in the years to come in these tight games they will know what to do to be on the right side of the scoreline.”

In the short-term, Marshall will not be resting on his laurels. After so long out, he is itching for more game-time between now and the end of the season. The Ulstermen, who are currently second in Conference B of the GUINNESS PRO14, face a trip to Scotstoun to play Conference A leaders Glasgow Warriors on Friday (kick-off 7.35pm).

“I want to stay in the matchday squad and try and get a start towards the end of the season,” he added. “We’ve tough games but good games. We’ve Glasgow and Edinburgh away the next two weeks, then Leinster at home. They’re tough games but they’re winnable. We’ll take confidence from this performance, and character too. There’s no reason we can’t win all three and see what happens after that.”

Meanwhile, Ulster and Ireland captain Rory Best sustained an ankle ligament injury during the early stages of the three-point loss to Leinster at the weekend. He will be unavailable for selection for the game against Glasgow.