As he reflects on a busy few weeks with province and country, workhorse flanker Scott Penny has admitted genuine surprise at the way his Leinster career has taken off in the past few months.

Whereas most people use the Ireland Under-20 squad as a springboard into the professional game, Penny featured four times in the GUINNESS PRO14 before making his Ireland U-20 debut against England at the beginning of the month.

He played a major role for Noel McNamara’s young side in that magnificent bonus point victory, before being retained in an unchanged back row with John Hodnett and Martin Moloney for the away win in Scotland and also tomorrow’s clash with Italy in the third round of the U-20 Six Nations.

“I’ve really enjoyed myself here,” admitted Penny, speaking at the squad’s team base at Sandymount Hotel this week. “It’s great to be playing with all your mates. I played with these guys at 18s, 19s, a few of them in school, so it’s really good to play with them again. I didn’t really expect to be getting this much game-time with the (Leinster) seniors, maybe one cap this year.

“With people away with injury and Ireland, I got my opportunities. All the senior lads there helped me ease my way in so it wasn’t too nerve-wracking. Stuart (Lancaster) and Ross Molony and the likes of them helped me get into it. I’d know the lads. Nick (McCarthy) used to coach me, then Ross (Byrne) and Dan (Leavy) – they were all in school so I knew them before going in.”

The school he refers to is, of course, St. Michael’s College. In addition to the aforementioned trio of McCarthy, Byrne and Leavy, the south Dublin rugby nursery has also produced current international star James Ryan, versatile Leinster back Noel Reid and Byrne’s younger bother Harry, the starting out-half for the Ireland U-20s.

Having started his rugby journey in the minis at Lansdowne, Penny’s club side is now UCD where he is studying financial maths. His older brother Alex is the current captain of the students’ All-Ireland League side. In spite of what this might suggest, though, rugby has not always been part of his family’s DNA.

Scott explained: “I played in Lansdowne when I was about six and played there until I joined Michael’s in first year, then just played for Michael’s for the rest of the six years. My dad would never have played, so I started playing because my brother played and I thought I might as well for the craic. My dad plays golf and tennis, but he played a bit of Gaelic in school. That’s about it.

“I used to play Gaelic for Kilmacud Crokes. I played Gaelic before rugby so I was in Crokes as early as possible. When I was probably four. I played Gaelic and hurling, but quit hurling when I went into Michael’s in first year. Then played Gaelic until fourth year.

“I only played it after the rugby season was over because they hate you playing two sports at once. It’s a bit too tiring and you can’t keep it all up at the same time. I always really enjoyed it (rugby) and in first year I started getting better. Then in third year, people started saying, ‘you could make a career out of this’, and I thought maybe. Things have gone on from there.”

During the gap week in between the 24-5 victory over Scotland and tomorrow’s match against Italy in Rieti (kick-off 7pm local time/6pm Irish time – live on the Irish Rugby YouTube channel), the Ireland Under-20s linked up with Joe Schmidt’s senior squad for an open training session at the Aviva Stadium. 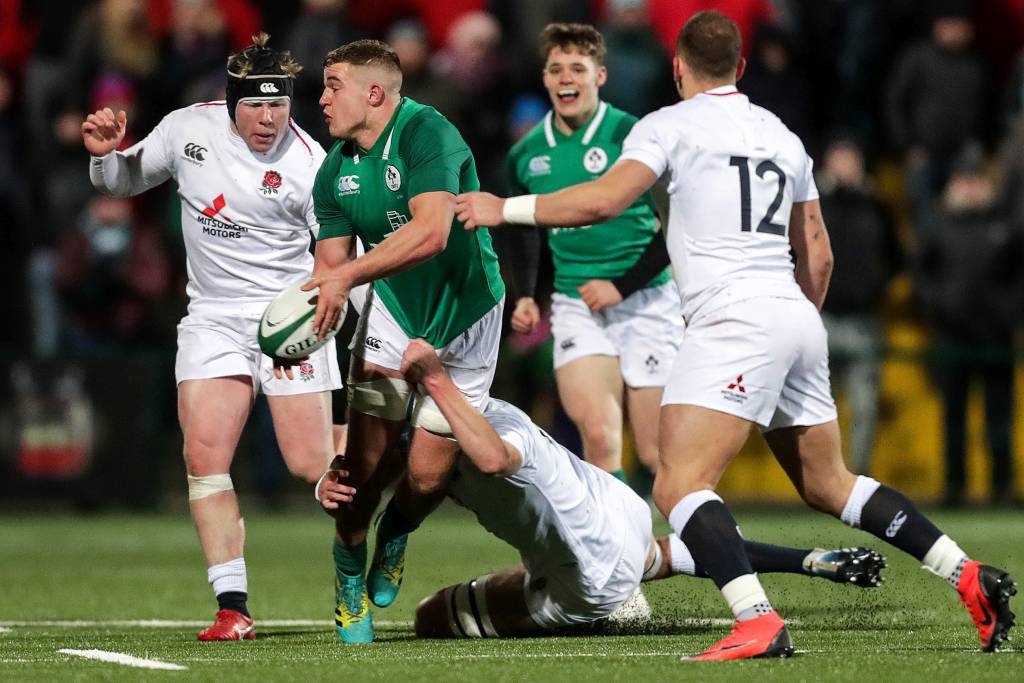 Seeing it as ideal preparation for what is sure to be a very physical contest with the Azzurrini, Penny commented: “It was really good. It was good to see the pace and the tempo that they (the senior players) bring, it felt like we got a lot out of it. This week, the Italians are going to play really quickly and we got used to that pace last Friday.

“You’re kinda almost afraid to make mistakes there just because Joe (Schmidt) is watching. The physicality and clarity they brought to everything was really good for us to learn from. Joe talked to us to say well done on the Six Nations so far and to keep up the good work.

“If we were doing stuff wrong, he’d call us out on it. It’s best for us to learn from it. Everyone was looking to show everything they can do and trying to impress Joe pretty much.”

The only unbeaten team left in the U-20 Six Nations, table toppers Ireland are currently four points clear of the chasing pack. That stunning success over a much-fancied England team at Irish Independent Park lifted the whole squad and they did not allow their standards to drop in Galashiels seven days later.

Penny was delighted with the way Ireland neutralised the English pack, but is aware that they will need to be on their game again if they are to overcome the Italian challenge. “Before the (England) game, we were kinda nervous about our scrum but I thought our scrum really helped us throughout the game and we were really happy with that,” he added.