After missing out on the open training session at the Aviva Stadium, Ireland Under-20 winger Jonathan Wren is back in harness for tomorrow night’s U-20 Six Nations showdown with Italy in Rieti (kick-off 7pm local time/6pm Irish time). The game will be streamed live on the Irish Rugby YouTube channel, with thanks to PwC Ireland.

The Crosshaven native was held back from last Friday’s work-out with Joe Schmidt’s senior squad as a precaution, but has retained his place for the Italy match. This will be his third consecutive start on the left wing, following the opening two victories over England in his native Cork and Scotland in Galashiels.

“I was actually being managed last week. I wasn’t in that session. It would have been a good run-out. I watched a bit of it, it looked like a great session,” explained Wren, who has Jake Flannery and the returning Angus Kernohan for company in the back-three tomorrow.

“I had shin splints for a large part of this season. They watch my load at the start of the week, so I would kinda be going towards the end of the week without too much pain. It’s great, it’s coming right now.”

Having shaken off a hamstring injury, Ulster winger Kernohan will make his first appearance of the tournament. He is the player in Noel McNamara’s U-20 ranks with the most big-game experience, having made his 13th senior appearance for the province against the Ospreys in Bridgend last Friday.

By contrast, the past few weeks has been a steep learning curve for Wren who is in his first year out of PBC Cork. He admitted: “The England game was definitely the most physical game I have ever played, without a doubt. It’s a huge step up even just straight out of school and the pace of the game and everything.

“It’s just a huge step up. There is so much detail that goes into everything that when you were watching the matches last year, you would never realise the amount of work that goes into it.”

That bonus point triumph over England, which was followed by another successful outing away to Scotland, was a particularly special night for Wren. Following several seasons in Dubarry Park and Donnybrook, the Ireland U-20s’ home matches were switched to Irish Independent Park for the 2019 campaign. 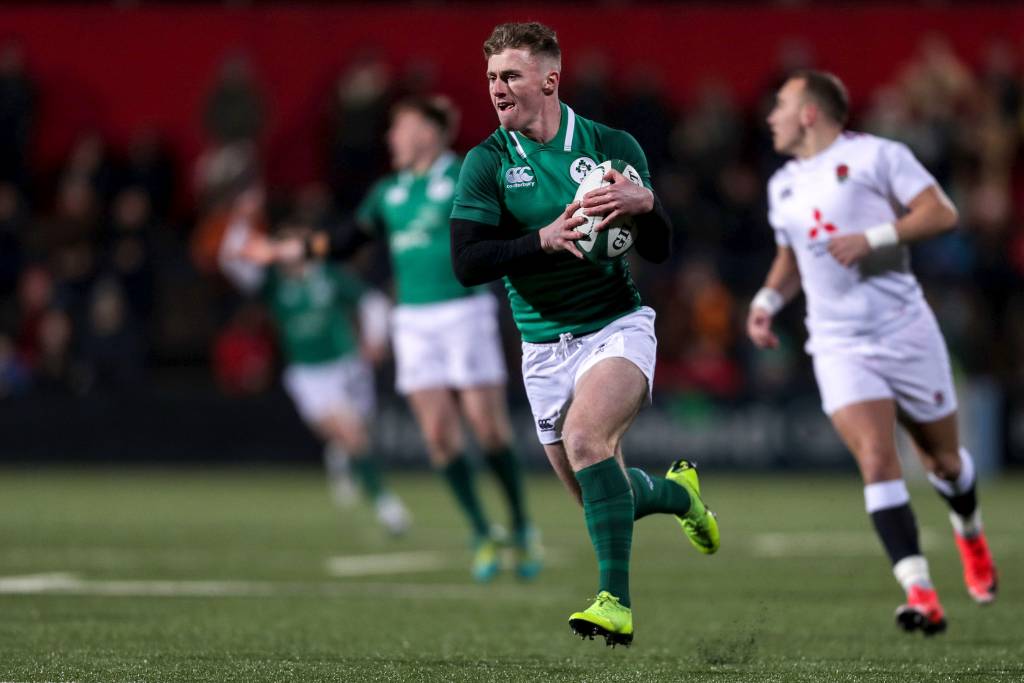 Although he is focused on Italy for the time being, Wren is excited about the prospect of facing France on the Leeside in round four, saying: “We take it a game at a time. We will focus all our time this week on Italy and obviously for me, I would be looking forward to getting back to Cork. It was a great atmosphere (for the England game). If we can get through this week, we will push on then.”

It is becoming a season of firsts for Wren in an Ireland jersey. Not only did he make his international bow on the opening weekend of the Championship, he also grabbed a fleet-footed and very well-taken first try at this level in the 24-5 success against Scotland at Netherdale.

He agreed: “I was delighted with that. I got an opportunity. It was a very tight and physical game, so we didn’t get a lot of ball out the backs or use the full width a lot. But when we did, we did some damage. It was a tight enough game for most of it.”

It was while in Presentation College in Cork that Wren first came to prominence. Amidst the various highs and lows that come with playing schools rugby at the highest level, the Munster Senior Cup title win two years is understandably his standout memory.

“We won it in 2017 and that was great but we missed out two years in the semi-final so there were ups and downs. It was up in Thomond Park. It was a great experience. We beat Glenstal (Abbey) in the final. They went on to win it then the next year, though.

“Paul Barr, Brian McMahon and Ger Burke, they are all great coaches. I had them with the senior team and I actually had some of them in Junior Cup as well so I had them the whole way up.”

When he is not on international duty, Wren divides him time between Munster’s base in Limerick and his club side Cork Con, the current All-Ireland League Division 1A leaders. There are no shortage of role models in either set-up, but one man sticks out above all others for the talented teenager.

“I am in the Academy down in Munster. It’s good, I’m traveling up and down from Cork. I am playing with Cork Con, but yeah we are fully based in Limerick. I travel down on Thursday nights for club training.

“Keith Earls has been there for how many years now? I have always looked up to him. He’s a great player. Just so skilful. Even things that not everyone notices like the grass cover (in the back-field). His decision making is great.”