Ireland Women’s head coach Adam Griggs believes Friday’s 22-5 bonus point win over Scotland in Glasgow gives his side confidence and something to build on heading into the middle round of the Women’s Six Nations.

The girls in green rebounded from their disappointing opening defeat to England, controlling large parts of their second round encounter with the Scots and scoring four tries in the process – Aoife McDermott, Leah Lyons, fit-again winger Alison Miller and player-of-the-match Anna Caplice all touched down.

Already looking forward to coming up against Italy in Parma in two weeks’ time, Griggs said: “We can now build for that one with intent after this performance in Scotland. I’m happy with the victory, we took some of the chances that were on offer. I guess, if I am being a typical coach, we could have perhaps scored a couple of other tries from the chances that we created.

“That is the challenge for this group at the minute to become more clinical. We put in some really good work during the middle of the game and for the most part we controlled things and bounced back well from the England defeat.

“We had a lot of possession in the game and we played with a good tempo – we’re trying to play the game at a good pace. We were really happy with our set piece as well, the game of rugby is ultimately built on that tight five and they did well which allowed us to get our back rowers involved and on the ball more.”

Ireland had 53.9% possession and 70% territory over the course of the 80 minutes at Scotstoun Stadium, making a whopping 1343 metres from 212 carries, breaking 18 tackles and winning their nine scrums and nine lineouts – as well as one steal – despite the difficult wind. Numbers they will want to improve against Italy are 22 missed tackles and the concession of 13 turnovers and 10 penalties.

The ever-improving Azzurre outfit, who sit second in the table, are unbeaten in the Championship so far after a 28-7 bonus point triumph over Scotland and Saturday’s three-all draw with Wales in Lecce. Fourth-placed Ireland won 21-8 when they hosted Italy last year, breaking clear thanks to captain Ciara Griffin’s brace of second half tries. 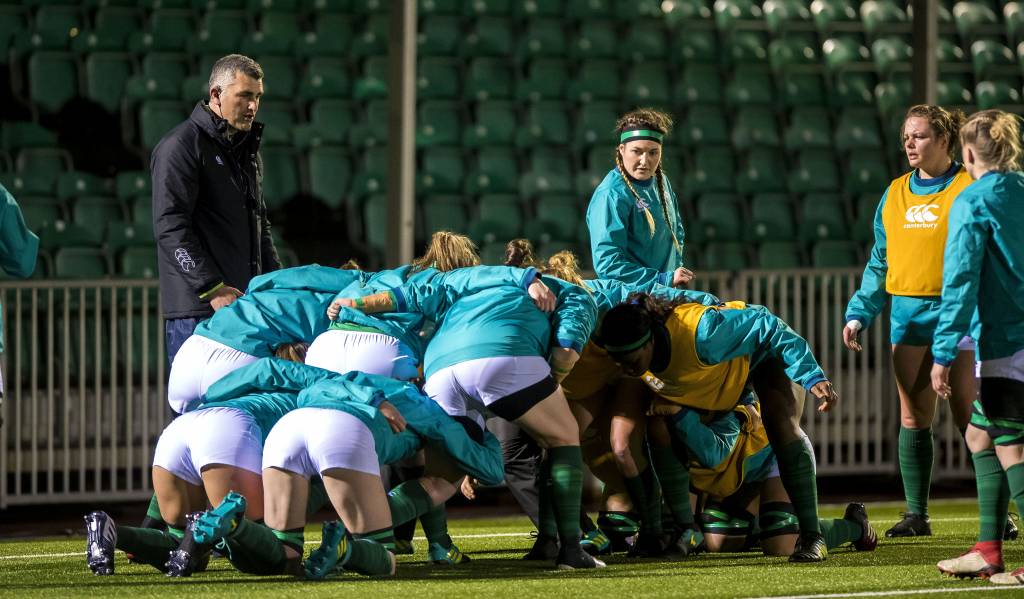 The Irish scrum was a key weapon in that game and it has also been a highlight of 2019’s opening two rounds. Their front row stocks are growing all the time with 21-year-old hooker Emma Hooban, who made her first Six Nations start in Scotstoun, and new caps Linda Djougang, Anne-Marie O’Hora and Deirbhile Nic a Bhaird adding to the competition for places.

Eager to add to that by getting the back-line firing on all cylinders, Griggs added: “We are building on that consistency with ball in hand and it is coming. We held the ball for a number of phases quite a few times against Scotland and that kind of pressure will always break defences down in the end.

“I don’t think Scotland have gone backwards from where they were last year when they beat us in Dublin, I’d prefer to think we have improved as a unit. Slowly but surely that is coming. I think the Italy game is going to be a cracker because they have played well of late, and we’ll have to prepare diligently and be ready when that game comes around.”

Meanwhile, the Ireland Women have moved up two places to eighth, above Wales and Spain, in the latest World Rugby Rankings which were released today. Two Ireland players also made Scrumqueens.com’s Six Nations team of the week – try-scoring forwards Lyons and Caplice, at tighthead prop and blindside flanker respectively.