Ireland Under-20 prop Josh Wycherley says it will be ‘a dream come true’ to line out at Irish Independent Park for tonight’s U-20 Six Nations opener against England (kick-off 7.15pm).

The Bantry native will make his debut at this age-grade as Noel McNamara’s side look to bed in at the famed Cork venue. Wycherley enthused: “It’s unbelievable. You always look forward to these moments when you’re a young fella coming up. It’s nice for the home county, having it down in Cork, in Independent Park. It’s a new 3G and it’s a brilliant park. Hopefully there’ll be a good crowd out for it. It’s exciting.”

It has been a season of progression for Wycherley in his first year out of school (Cistercian College Roscrea). As well as making the cut for the Under-20 Six Nations, he featured alongside his older brother Fineen in the Munster ‘A’ team’s inaugural Celtic Cup campaign.

“It was nice to get an opportunity in the Celtic Cup. I got a few starts. It was actually the first time myself and Fineen had played alongside each other, so it was a cool enough experience as well,” recalls the 19-year-old. “The experience of playing against bigger men and that exposure will lead you for opportunities here as well, moving into this kind of squad.”

The elder Wycherley (21) has since established himself as a more permanent fixture in Munster matchday squads, picking up 10 provincial caps this season alone. Despite playing in different positions in the pack, Josh has been able to lean on Fineen for some much-needed wisdom. 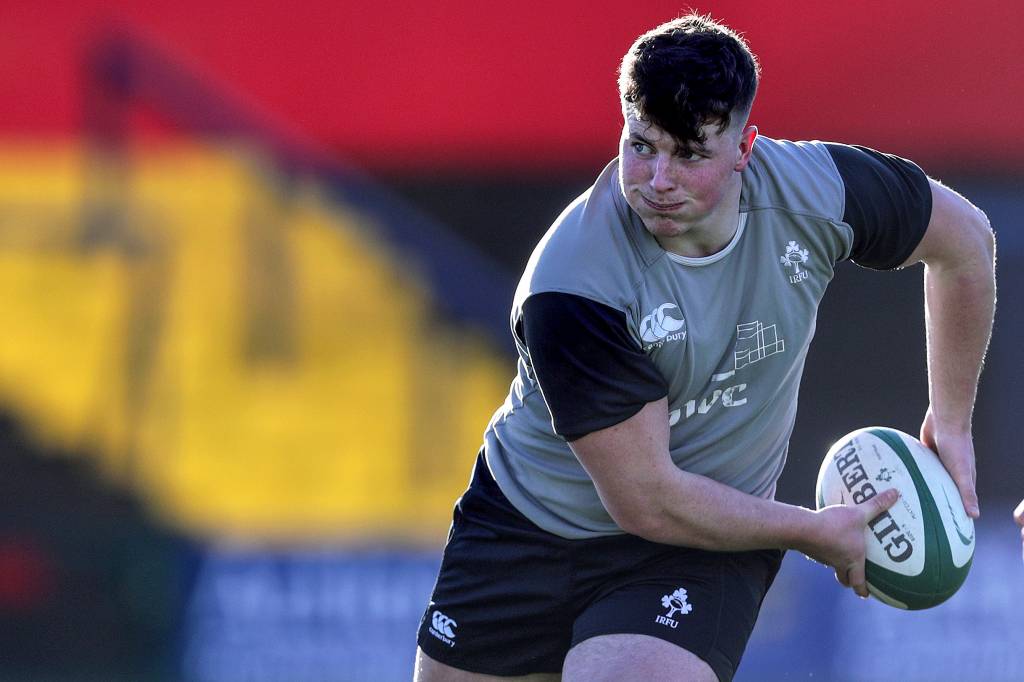 Since current senior star James Ryan inspired a comeback victory over England in the 2016 U-20 Six Nations, Ireland have suffered three consecutive defeats to England at this age-grade. If they are to be successful on home soil tonight, Wycherley believes the English forwards will need to be neutralised.

“They’re big fellas. They’re going to try and bully you up front all the time. As a pack, we just try and nail down our detail at scrum time and we just try and win the height battle really. Just keep our connections together and go as eight.

“We just try to stay together and keep our feet on the ground, and get go-forward (ball). Against a bigger pack, you’re not always going to make those yards. But as long as you can get good ball for the backs to play, it’s a good turnout.”

The Wycherleys are by no means the only Roscrea alums to make waves on leaving secondary school. Three Leinster Schools Senior Cup final appearances in this decade alone – a groundbreaking 2015 success squeezed in between 2011 and 2016 defeats – highlights the work that has been done by Cistercian College on the Offaly-Tipperary border.

In the case of Galway hurling prodigy Jack Canning, it is not just consigned to this part of the world either. A Senior Cup finalist with Roscrea in 2016, the gifted Portumna teenager recently signed terms at the Northern Suburbs Rugby Club in Sydney.

Having shared a dressing room with the flanker in the past, Wycherley believes the switch to the southern Hemisphere will proved to be a perfect fit for his former school-mate.

“When I went there first in fifth year (Wycherley initially spent four years in a local Bantry school), Jack would have been in sixth year. He was always good. He got an injury the year I was there, but he was always a good prospect coming through. Opportunities came for him and I’m delighted he took them really. You wish him well over there and I think he’s going well.”

It was a similar career trajectory that has brought Wycherley into the oval ball game. Originally a dual player with the local St. Colum’s GAA club, home of All-Ireland winners Alan O’Connor and Libby Coppinger, he eventually settled on rugby in his mid-teens and has not looked back since.

“I would have played with St Colum’s when I was younger. I came all the way up to maybe Under-16 and then just came through Munster Cadets and the RDS (regional development squads) and stuff like that. I would have veered away from the football and hurling, and just try and focus on the rugby part of it.

“I would normally have played at full-forward, really. It was good, but rugby took over then really and I just said I’d focus on that and have a crack off it. When you move on up through stages of Cadets, RDS, then you go on into Under-18s and now I’m in the Academy. It’s good stepping stones,” he added.