Apart from MU Barnhall’s eye-catching 36-14 success at home to Rainey Old Boys, the four other opening games in All-Ireland League Division 2B were all decided by seven points or less. The Blue Bulls top the table thanks to their six-try haul.

The first round action got underway under the Aviva Stadium floodlights on Friday night with Wanderers’ annual opener on the main pitch. Unfortunately for the home supporters, it was their Leinster rivals Greystones who took the spoils after overturning an eight-point half-time deficit.

‘Stones capitalised on a Wanderers sin-binning as centre Ryan O’Loughlin’s searing break set up winger Padraig Geoghegan for what proved to be the final try in a 24-17 victory. The visitors led early on through the boot of captain Andrew Kealy, but trailed 14-6 and 17-16 before outplaying Wanderers down the final stretch. 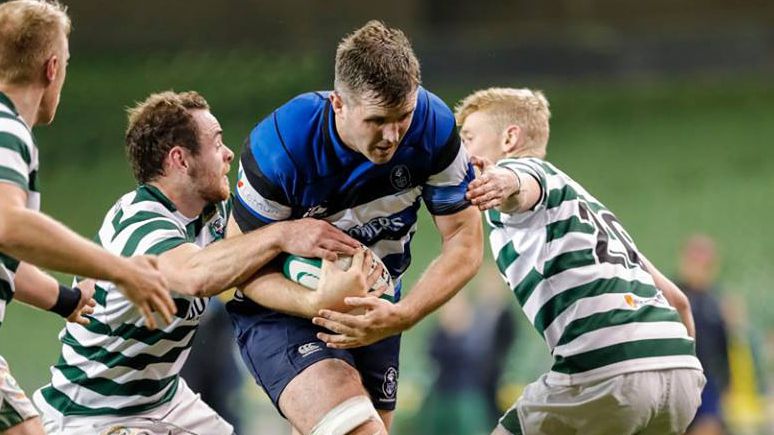 Their head coach Kevin Lewis told Irish Rugby TV afterwards: “Very, very happy with the win. That was a very good Wanderers team, certainly a very strong pack. They put it up to us in the first half and we really had to dig in and get out of jail there. With 10 minutes to go to half-time we were struggling.

“I suppose at that point, in fairness to the lads, they rolled their sleeves up. They showed a lot of spirit and played some great rugby in the second half, and I think we deserved the win in the end. We were obviously very disappointed to get relegated on the last day last year.

“For our end there is a huge ambition in the club to climb the league tables and get somewhere closer to Division 1. It’s a new team, a new challenge and I suppose they’re just setting out on a journey now and luckily enough we’ve started with the right result.”

A late rally from Skerries which produced three tries was not enough to overhaul Dungannon who prevailed 28-25 at Stevenson Park. While pleased with the four points, ‘Gannon boss Andy Hughes will be frustrated not to pick up a bonus point after his side led 28-6 after an hour’s play.

The Tyrone side’s new Argentinian centre Lucca Avelli knocked over three penalties inside the opening 27 minutes, giving them a 9-6 half-time lead with Skerries out-half Billy Mulcahy splitting the posts twice at the other end.

Glen Sinnamon, Daniel Maxwell and Sean O’Hagan ensured Dungannon had the stronger scrum and a reliable set piece platform, but Skerries flanker Michael Turvey went closest to breaking the try deadlock when he was held up over the line. Dungannon’s attack really clicked in the third quarter, though, as they punished the Goats for their indiscipline which included the 43rd-minute sin-binning of prop Cormac Marrey. Winger Matthew Montgomery’s intercept try – converted by man-of-the-match Avelli – got the scoreboard moving again for the Ulstermen.

A further yellow card had Skerries under even more pressure and Kiwi number 8 Jonah Mau’u crossed at the posts for Avelli to make it 23-6. A Montgomery effort via an Avelli grubber kick was ruled out by a touch judge, before left winger Jordan McIlwaine got past two defenders to score in the corner and leave ‘Gannon on the cusp of a bonus point success. But it was Skerries who produced the stronger finish, inspired by flanker Barry Murphy’s 66th-minute try. Winger Kevin McGrath followed up with a brace, including one from a charge-down, and Mulcahy tagged on the latter two conversions to suddenly make it a three-point game. Time was not on their side, however, and Dungannon’s efforts over the first hour proved enough.

A fantastic five-try first half performance catapulted MU Barnhall to a momentum-building 36-14 win over Rainey Old Boys at Parsonstown. Having finished third and second respectively in the table last season and contested the promotion play-offs, both clubs have big ambitions for the 2018/19 campaign.

Barnhall’s pacy outside backs were too much for Rainey to handle, with former Leinster winger Darren Hudson using a quickly-taken penalty on halfway to romp clear for an opening unconverted try. Continuing to move the ball wide at every opportunity, the Blue Bulls found further holes as Conor Lacey and Paul Nalty both crossed to make it 17-0.

Despite being boosted by new captain Paul Pritchard’s return to fitness, Rainey struggled to retain possession and Barnhall’s attack was really in rampant form. Eoghain Quinn and Lacey surged forward from the back-three to put 29 points between the sides, although Rainey felt a knock-on and a foot in touch had been missed by the match officials.

The Magherafelt outfit had the breeze at their backs in the second half and pinned Barnhall back in their 22. The pressure led to tries from brothers Ronan and Michael McCusker, with the latter breaking through from the tail of a lineout. Andrew Magrath converted both but Barnhall scrum half Rob Holt added the extras to his own try to complete a dream first day for the new table toppers. Sligo, last year’s Division 2C champions, were held scoreless in the second half as Sunday’s Well fought back to win 20-17 on the new 3G modified pitch at Irish Independent Park. Peter O’Brien converted tries from Cyprien Jouve and Michael Moynihan, and his second successful penalty, in the 64th minute, was the match-winning score. It was another tight encounter between two well-drilled teams, with Sligo full-back Niall Gray kicking the visitors ahead with an eighth minute penalty. He also added the extras to tries from Philip Carter – via good hands from Mark Butler, Ryan Feehily and Enda Gavin – and Brendan Cunningham, who was up in support to finish off strong initial running from Calum Goddard and Feehily.

Sunday’s Well trailed 17-10 at the break, their lone first half try coming from a terrific 12th-minute charge-down and finish by captain Jouve. Sligo, who lost influential flanker Diarmuid O’Dowd-Hill to a hamstring injury, were eventually edged out as prop Moynihan’s levelling seven-pointer, following a sustained bout of pressure, was supplemented by Gray’s decisive second penalty.