The Ireland Women put in their most complete performance of the weekend to record a comprehensive 31-0 win over Italy in the 7th-8th place play-off at the FIRA/AER European Women’s Sevens Grand Prix tournament in Moscow.

Two young players who have a lot of potential in the game, Amee-Leigh Murphy Crowe and Hannah Tyrrell, were in fine try-scoring form as Ireland signed off in the Russian capital with a runaway win.

Murphy Crowe used her pace on the outside to score a brace of tries and snappy scrum half Nicole Cronin added a third for a 17-0 half-time advantage over Italy.

Tyrrell, the Dublin Ladies Gaelic football goalkeeper, matched Murphy Crowe’s tally with a couple of well-taken tries in the second half to ensure a winning finish for the girls in green, who are back in action next weekend in the second round of the Grand Prix Series in Brive.

Day two of the 12-team event in Moscow had started in disappointing fashion for Jon Skurr’s side as they fell 29-0 to a strong England outfit – the eventual champions – in the Cup quarter-finals.

That put them into the Plate competition where they met close rivals Spain, whom they defeated at the Amsterdam leg of the IRB Women’s Sevens World Series recently.

Ireland had the first opportunity to attack as Siobhan Barrett and Claire Keohane carried forward, but Spain hit the front in the fourth minute through Africa Felez Barragan despite some determined tackling from Tyrrell and Nikki Caughey.

Patricia Garcia converted and as Ireland struggled for territory, the Spanish almost scored from a late counter before the half-time hooter. It took tenacious defending from Cronin and Barrett to force a handling error.

Ireland continued to work hard in defence with Tyrrell producing an important tackle just a couple of metres out. However, from the ensuing ruck, Garcia ghosted through on the blindside to dot down in the left corner.

Skurr’s charges finally got on the front foot thanks to a lovely switch between Laura Lee Walsh and Barrett which sent the tall Tralee player striding into the Spanish half.

The breakthrough came in the final minute when the nippy Murphy Crowe sprinted over from the right to close the gap. Keohane added the extras for a 12-7 scoreline, but time ran out on Ireland’s comeback bid.

Next up were the Italians in a battle for seventh place overall, and it was evident right from the off that Ireland had the beating of them.

Just 55 seconds in, Murphy Crowe ran in a tremendous solo try from her right wing station as she evaded three defenders on the way to the line. Keohane converted for an early 7-0 advantage.

Ireland showed good width as Murphy Crowe threatened again on the right before Walsh unfortunately knocked on with space to exploit on the opposite wing.

Nonetheless, Clanwilliam’s Murphy Crowe soon added to Ireland’s lead in the fifth minute, burning off a defender on the outside for her fourth try of the tournament.

Ireland were dominating possession at this point with the leaping Walsh doing well to win restarts or disrupt the Italians and force mistakes.

Shannon Houston, a dynamic presence as captain, was just help up after Cronin injected some pace by quickly tapping two penalties in succession.

The third try arrived just before the interval as Tyrrell ran strongly in midfield and the ball was moved to the left at pace for Barrett to send Cronin over in the corner.

Tyrrell and Murphy Crowe were full of running and launched Ireland forward on the restart. Two minutes in, Cronin found a gap with some good footwork and closer in Tyrrell used her strength to stretch over just to the left of the posts. Keohane’s conversion made it 24-0.

Ireland then built from deep for their fifth and final try as Barrett recovered an Italian kick in the 22. Good distribution led to Tyrrell slicing through on the left and she stepped inside the final defender to run in a cracking score which Caughey converted.

Tyrrell showed her worth in defence too, putting in an excellent tackle to halt a dangerous Italian break late on. The five tries-to-one outcome will have pleased coach Skurr who will be hoping for further improvements in France next time out.

She continued her development as a referee at the Moscow tournament and did a fine job when taking charge of the Cup semi-final between Russia and Portugal and the 3rd/4th place play-off between the Netherlands and Portugal. 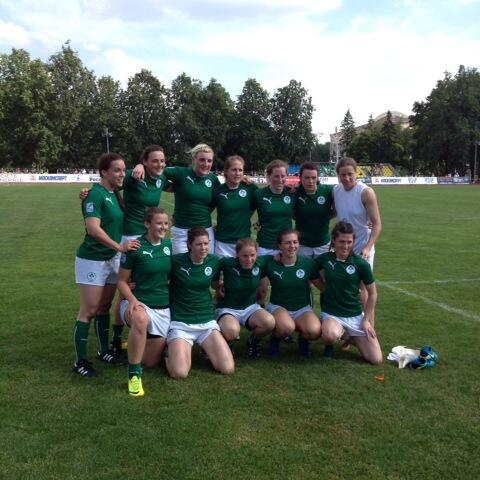 Day 1 Round-Up: Ireland Women Through To Last-Eight In Moscow