Ireland will be gunning for revenge against England in Sunday’s quarter-finals at the FIRA/AER European Women’s Sevens Grand Prix tournament in Moscow, having lost 34-5 to them in the pool stages.

Ireland lost two of their three Pool B games at the Luzhniki Olympic Complex, but their 22-15 victory over Belgium booked them a spot in the last-eight.

Portugal got the early edge on Ireland in their opening encounter of the 12-team competition, scoring two unconverted tries in the first half.

Laura Lee Walsh hit back with a seven-pointer for the girls in green after the break, but they could not add to it in a tense finish as the Portuguese claimed a 10-7 win.

Jon Skurr’s side were much improved in their second outing in the Russian capital, emerging with a seven-point triumph over a battling Belgian team.

Captain Shannon Houston set the tone by touching down from close range after Katie Fitzhenry had been hauled down short of the try-line from a quick tap penalty.

Walsh was next over the whitewash as she took a hard line, shrugged off a tackle and cantered in under the posts. Claire Keohane added the conversion for a 12-0 scoreline.

Belgium leaked a series of penalties which allowed Ireland to build further pressure and Martina McCarthy was released for a try wide on the right, giving her side a 17-0 interval lead.

But the Belgians profited from an Irish pass that went loose to attack up the left and score inside a minute of the restart, with Charlotte van Eecke getting over.

Ireland replied with the try of the game as youngster Amee-Leigh Murphy Crowe produced a fine run from her own 22 to race clear on the left wing and score for 22-5.

There were no further tries for Ireland though and they will be disappointed to have allowed Belgium through twice in the closing stages, with Evelien Rosier breaking free off the back of a scrum and Ciska de Grave also dotting down just before the hooter.

The girls in green’s final pool match was a much-anticipated showdown with England, who accounted for Belgium (41-0) and Portugal (24-7) earlier in the day. 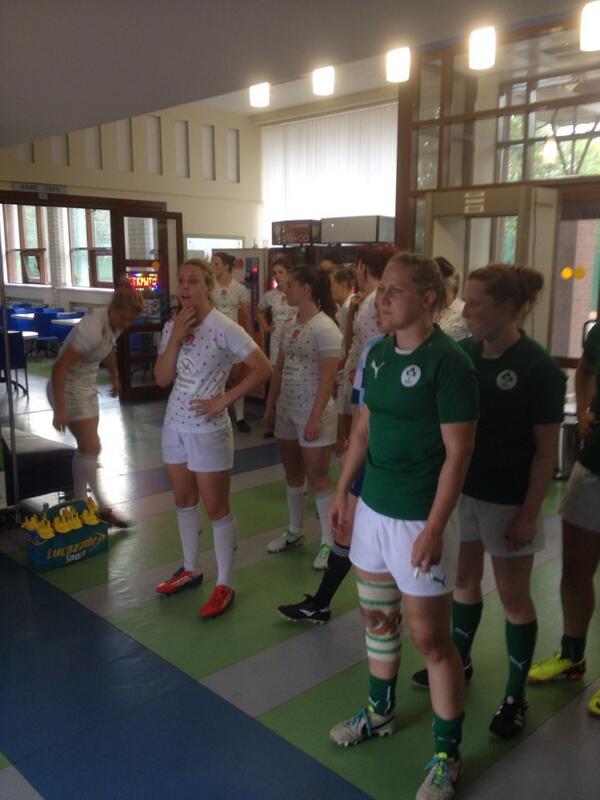 England enjoyed a strong start and scored a try after a minute’s play as Amy-Wilson Hardy broke a tackle in the Irish 22 to score to the right of the posts.

Fitzhenry, Nikki Caughey and Houston were repelled as they tried to launch attacks from deep, with the latter stepping up in defence with a crunching man-and-ball tackle.

However, England looked potent out wide and Natasha Brennan got loose on the left to run in their second try.

10-0 down, Ireland’s passing let them down at times as promising attacks were spoiled and England managed to feed off those mistakes.

Houston won an overthrown English lineout but lacked support and was turned over with England attacking out to the right where Brennan handed off a defender to crash over in the corner.

The English team added to their 15-0 half-time advantage just 40 seconds after the restart, with the ball spread wide for Sarah McKenna to break inside McCarthy and touch down to the right of the posts.

Susan Vaughan was an offload away from creating a break for Ireland before Leanne Riley ran in a quick brace of tries to widen the margin to 34-0 – the second following a yellow card for scrum half Cronin.

Ireland did muster up a late consolation try in response, with Keohane scoring in the right corner after a cohesive spell of attacking out wide. They will hope for more of the same and a much tighter game when the sides lock horns again in the quarter-finals tomorrow.

You can watch live coverage of England v Ireland from Moscow here on the tournament’s YouTube channel – kick-off 10am local time/7am Irish time.

Speaking prior to the squad’s departure for Moscow, Skurr said: “The preparation for the Europeans has been good. We have made a few changes from Amsterdam with Nicole Cronin and Amee-Leigh Murphy Crowe returning to the squad.

“The girls’ skills are improving week on week. That said, it is time for us to push on and start to deliver consistent performances.

“We go into this tournament knowing that we have to finish in the top two, excluding the three core teams (Russia, Spain and England), to advance to the Women’s Sevens World Series requalification event in September.”