The search is on to find Irish Rugby memorabilia to add the already extensive collection with a view to the opening of an IRFU Museum.

Hands up those who remember the crowd at Lansdowne Road singing, “Old soldiers never die”, when a player went down injured?

Or the school children chanting, ‘Carry the rug – Carry the rug’ as the gentlemen with their wives/lady friends on one arm and a rug on the other walked on to the pitch, through the Wanderers pavilion gate, to take their touch and goal line seats.

Step forward the thousands who took away pieces of J.C.Daly’s Triple Crown jersey from Ravenhill in 1948.

It is not difficult to stir Irish rugby memories. Yet while the tradition is rich, the tangible evidence of rugby’s progress within the four provinces, over a hundred and thirty five years is not as readily available as it should be.

The IRFU Museum & Memorabilia Sub Committee is actively seeking to remedy this deficiency.

The Sub Committee has almost completed its photographic display for the Aviva Stadium at Lansdowne Road.

The display will include images of IRFU Presidents and Irish team captains. The record of captains is complete, from the first one George Stack to the 100th, Ronan O’Gara. Of the 121 Presidents there are photographic records of 119. The missing two are:

H.M.Turnbull – President in 1890/91, who was a committee member of the Belfast Albion Football Club, whose grounds were located at Rugby Road, Belfast.

J.F.Maguire – who played for the Cork Football Club, whose grounds were located at Cork Park. He played for Munster and for Ireland against Scotland in 1884. He was President in 1897/98.

The Sub Committee would be pleased to hear from any person who may be able to assist in verifying any of the above through old photographs or any other source.

The foregoing demonstrates at once both the wealth of material collected and the regrettable absence of other vital memorabilia. In order to effect improvements in this area, the Sub Committee has now made arrangements for better storage and display facilities.

Moreover, the IRFU is committed to providing space for a museum, within the next two years. In preparation for this, the Sub Committee would now like to appeal to all clubs, schools and relatives/families of past international players and /or IRFU Presidents and Committee members, who may have rugby memorabilia which they would like to pass on to the Union for posterity, to contact the IRFU Office at 10–12 Lansdowne Road, Ballsbridge, Dublin 4 or by email 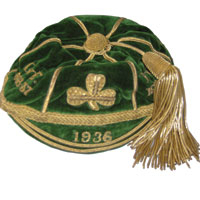 Such items have found their way to various parts of the world and over the years the Union has obtained a number of interesting items from home and abroad. For example the accompanying photographs show some recent acquisitions.

There is an interesting tradition relating to the touch judge flags. It is still the practice at the after-match dinner, to present the Presidents of the two participating Unions with specially designed touch flags.

This practice dates from as far back as the 1890s when the Presidents acted as touch judges at internationals and were allowed to retain their flags.

The green–ganseyed ghosts of the Ryans, Magees, Clinchs, Stephensons and their likes still hover around Lansdowne Road and memories of them will not die. Better still, however, to have visible mementos of them and to be able to touch the hem of their garments.

So please heed the Unions appeal – search that attic, open that box or drawer, share past dreams with present and future Irish rugby followers … do not let old soldiers fade away.

You can contact the committee at the IRFU offices: 10/12 Lansdowne Road or by email.