The Ireland Under-20s, sponsored by PwC, racked up six tries in an encouraging 38-7 bonus point win over Scotland on the opening day of the rescheduled U-20 Six Nations in Cardiff.

Harri Morris was then sent-off for taking Jamie Osborne out in the air, and Ireland used their second-half numerical advantage to sew up the result with scores from Sam Illo, captain Alex Kendellen, Shane Jennings and full-back Osborne.

Kendellen led the way with a player-of-the-match performance from number 8, while fellow back rower Oisin McCormack, rangy centre Jennings and the front row contingent also impressed.

The well-judged victory extended Ireland’s winning streak between the 2019 and 2021 U-20 Six Nations tournaments to nine matches. Hosts Wales, back at the Arms Park next Friday, are their second round opponents. 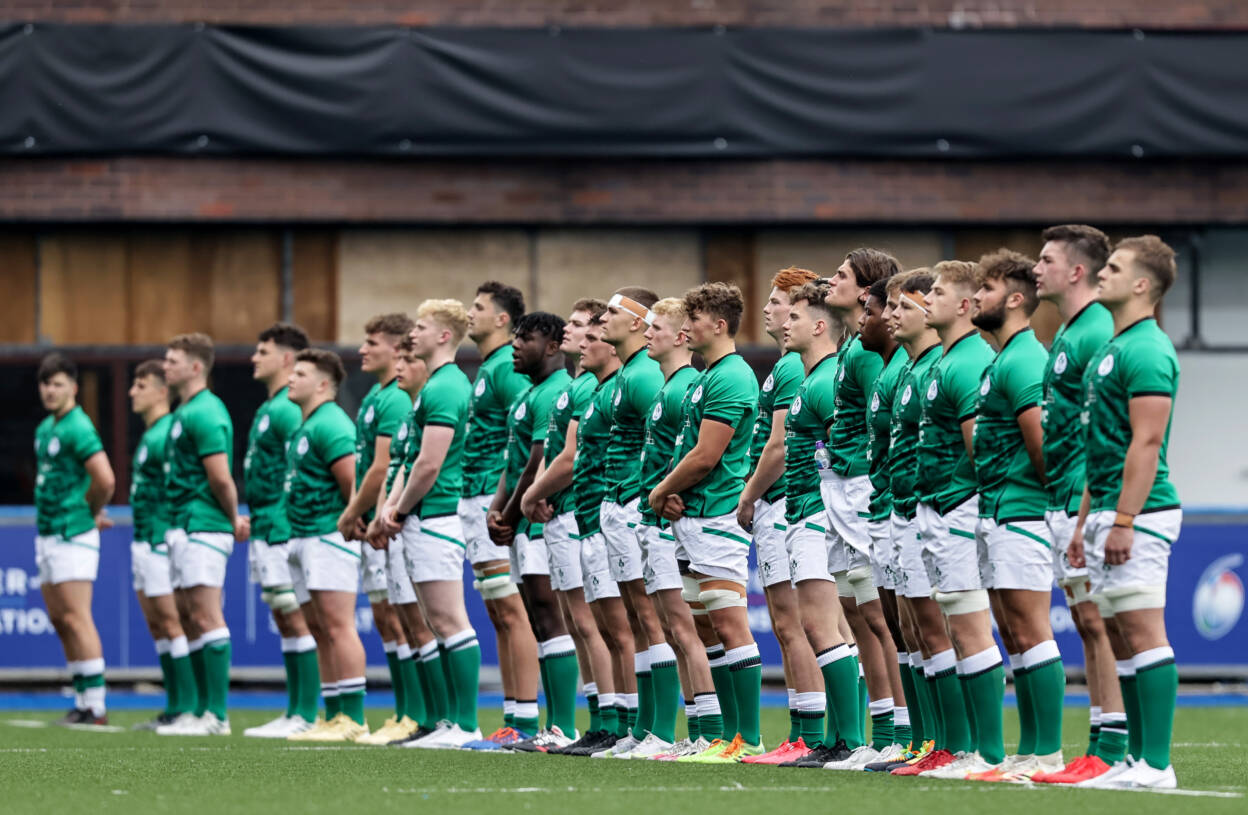 Ireland were first to settle in today’s opener, Josh O’Connor and McCormack driving them right up to the Scottish try-line before a spell of picking-and-driving ended with blindside Soroka burrowing over.

After out-half James Humphreys had converted, both teams probed with the boot and the Irish defence stood up to the early Scottish attacks, with Kendellen picking up a turnover penalty.

However, a series of penalties brought Scotland into range and, armed with a penalty advantage in the 20th minute, Cameron Scott’s inviting dink was brilliantly scooped up by centre Elliot Gourlay for a converted try at the posts.

Ireland had to absorb persistent Scottish pressure – hooker Patrick Harrison was prominent in the carry – before Cathal Forde’s ball-dislodging tackle allowed Kendellen to kick clear out of his 22. 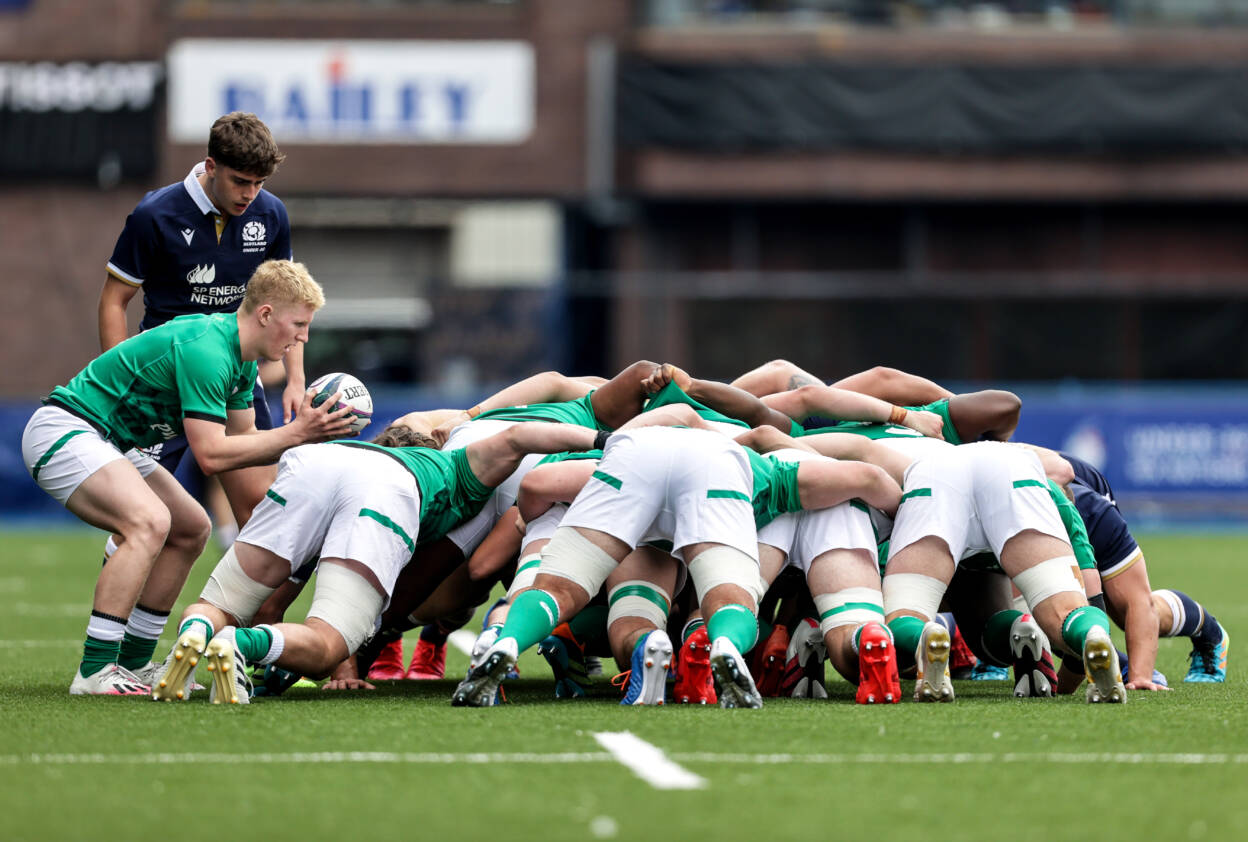 Murphy’s side made the most of their luck four minutes before the break, a Forde pass bouncing forward off Osborne’s head and a stray Scottish kick opened up an opportunity. McCormack dribbled through, past the try-line, and was tackled early as he attempted to score.

Following the TMO review, Italian referee Gianluca Gnecchi binned winger Gray for the infringement and awarded the penalty try as Ireland retook the lead at 14-7.

Despite having the extra man, Ireland were on the back foot for the remainder of the first half. Openside McCormack got in to disrupt and force a knock-on, though, after a five-metre scrum and a strong carry by Ben Muncaster.

It was a disastrous start to the second period for the Scots, who had flanker Morris dismissed after just 29 seconds for a reckless challenge on Osborne as he claimed a high ball. 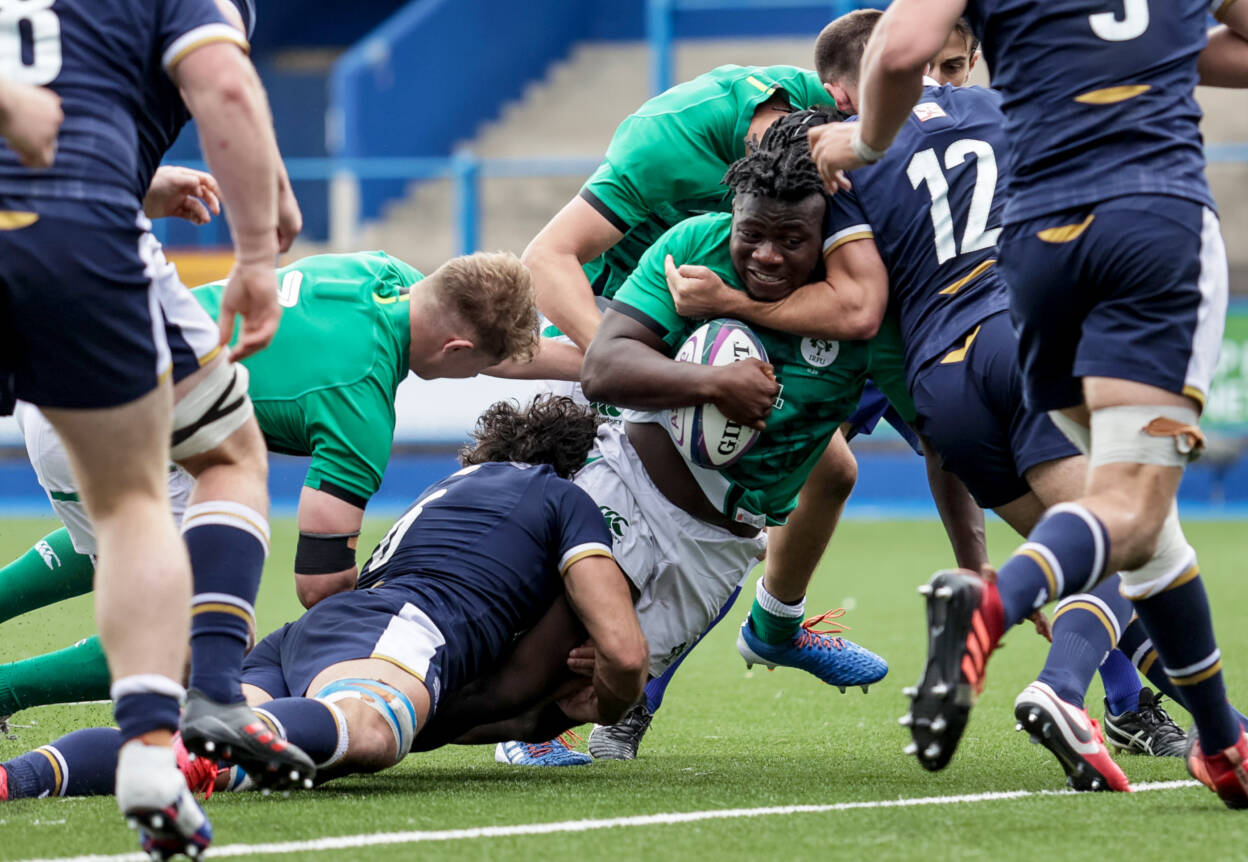 Within a minute of the red card, Ireland’s lively tighthead Illo barged over to the right of the posts, the momentum built by a powerful initial maul. Tim Corkery, who had replaced Humphreys (HIA), was unable to convert.

Handling errors prevented Ireland from scoring again until the lineout platform worked a treat in the 56th minute. Harry Sheridan plucked the ball down, and with Illo and Temi Lasisi providing the grunt, Kendellen was driven over to make it 24-7.

Now dominating both territory and possession, Ireland bagged their bonus at the start of the final quarter. Set free by a nice spread of passes, Jennings used the support outside to ghost through a gap for an excellent effort from 25 metres out. 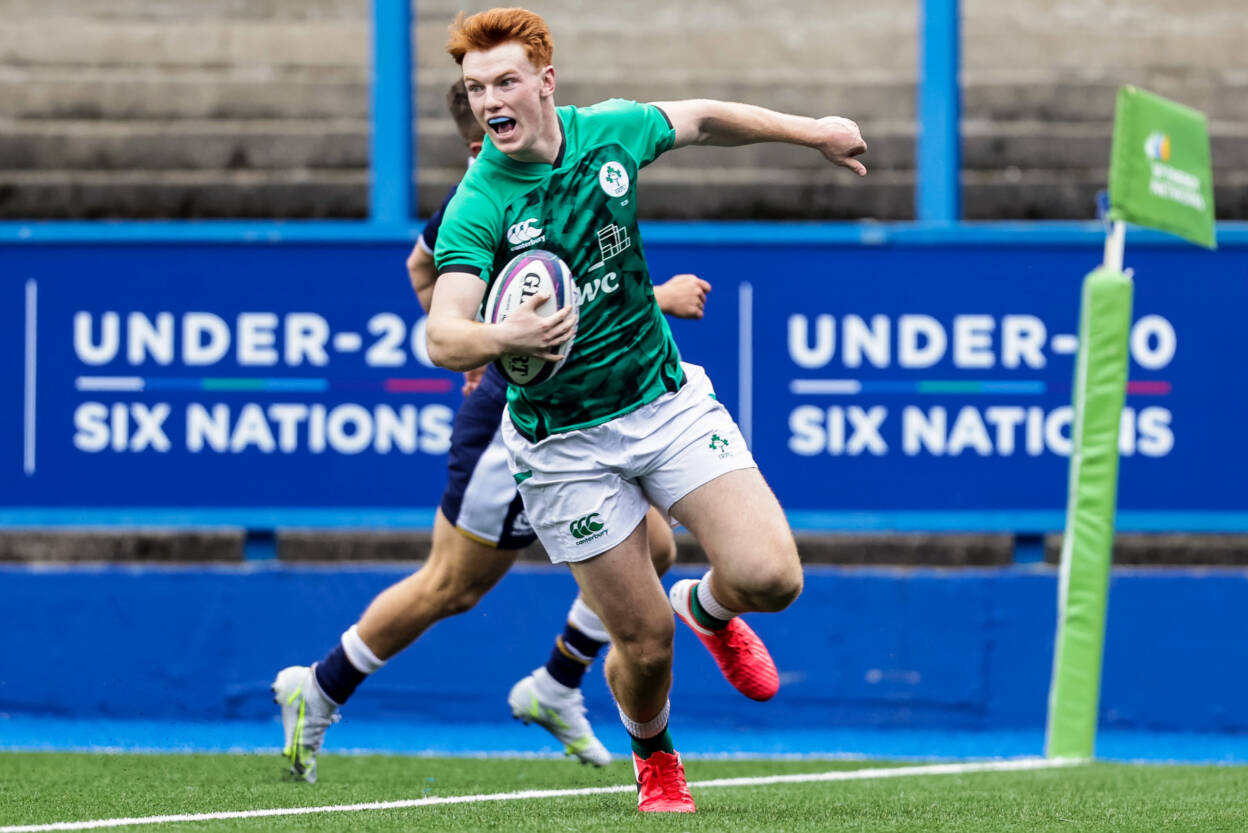 The extras safely added by Corkery, the impact provided by the Irish bench was typified by prop Jack Boyle who clamped down to win two turnover penalties – the second one just as Scotland looked poise to claw a try back.

Ballinasloe youngster Jennings missed out on an electric second try for a slight knock-on. Kendellen and replacement Chris Cosgrave worked hard to set it up for him, and Jennings showed his pace and footballing skills before his score was chalked off.

That sixth and final try did arrive two minutes from the end, Jennings’ counter down the left igniting the attack again. O’Connor, replacement Will Reilly and Kendellen all made further ground before Osborne stretched out to score. 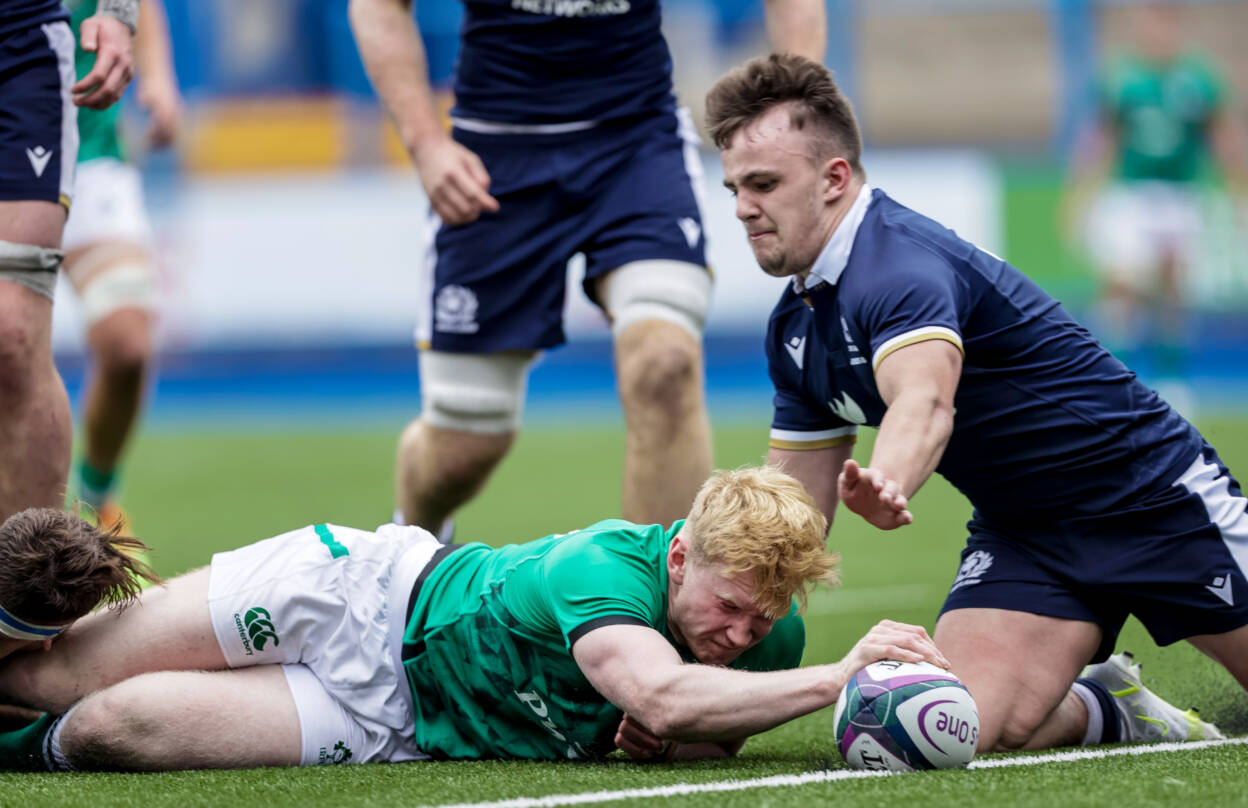 Corkery clipped over his second successful conversion, and Ireland continued to frustrate a gallant Scotland at the breakdown. In the dying seconds, replacement Donnacha Byrne came up with the turnover ball.