Two-try captain Alex Kendellen was at the heart of a superior second half shift from the Ireland Under-20s who came from behind to beat a durable Italy 30-23 at Cardiff Arms Park.

Kendellen turned in his second player-of-the-match performance of the U-20 Six Nations as Ireland (sponsored by PwC) overturned a 23-12 half-time deficit. Nathan Doak’s 79th-minute penalty sealed the result.

Cancelling out early tries from Eoin de Buitléar and George Saunderson, Italy, who had thumped Scotland 43-3, touched down three times in the opening 18 minutes to lead 17-12 with Ireland’s Jude Postlethwaite in the sin-bin.

One of those try scorers, out-half Leonardo Marin, fired home his second penalty – just before the interval – to leave Richie Murphy’s side with an 11-point gap to overcome.

Kendellen led the way with close-range scores after 45 and 55 minutes, sandwiching a Doak penalty and a yellow for Italy skipper Luca Andreani.

With the bench making its presence felt, Ireland continued to force penalties and after a Marin miss, scrum half Doak took his own tally to 10 points with that closing score.

A third bonus point victory in four rounds has Kendellen and company still in title contention, although unbeaten England could reopen a four or five-point lead at the summit when they play Wales at the same venue tonight. 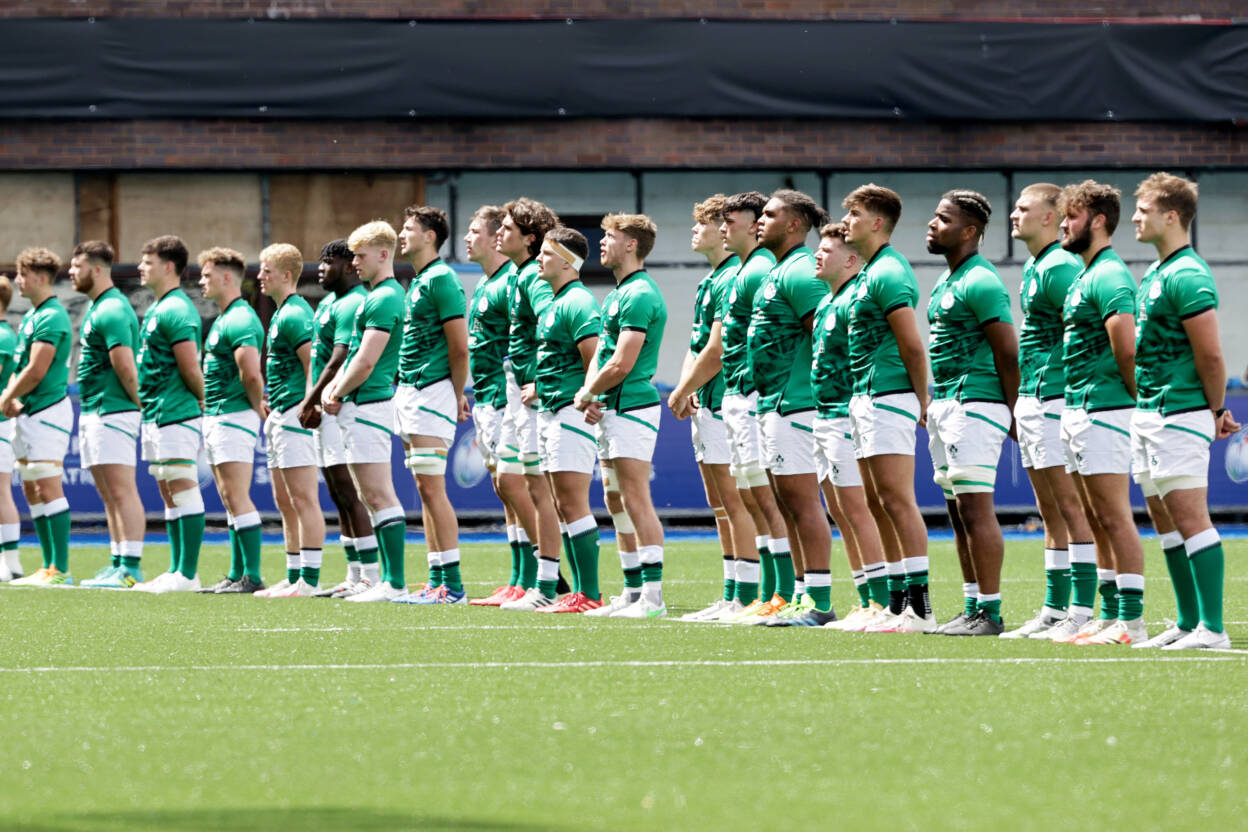 Italy leaked a clutch of early penalties, with centre Postlethwaite showing his strength on the ball. It was third time lucky for a lineout near the left corner, hooker de Buitléar barging over from a well-controlled maul.

The ball fell from the tee for Doak’s conversion which was charged down, and the bounce also favoured Italy for an opportunist sixth-minute try.

James Humphreys’ kick was blocked and Simone Gesi swooped on it to dash clear, getting away from Humphreys and Conor Rankin for a classy finish.

Having got back on terms, Italy made further headway following Postlethwaite’s yellow for a high tackle. Their pack shifted a lineout drive to the left, sending hooker Tommaso di Bartolomeo over for an unconverted 12th-minute effort.

Ireland swiftly retook the lead, profiting from an Italian fumble from the restart. A series of pick-and-drives ended with loosehead Saunderson – backed up by Harry Sheridan – crashing in under the posts for Doak to make it 12-10. 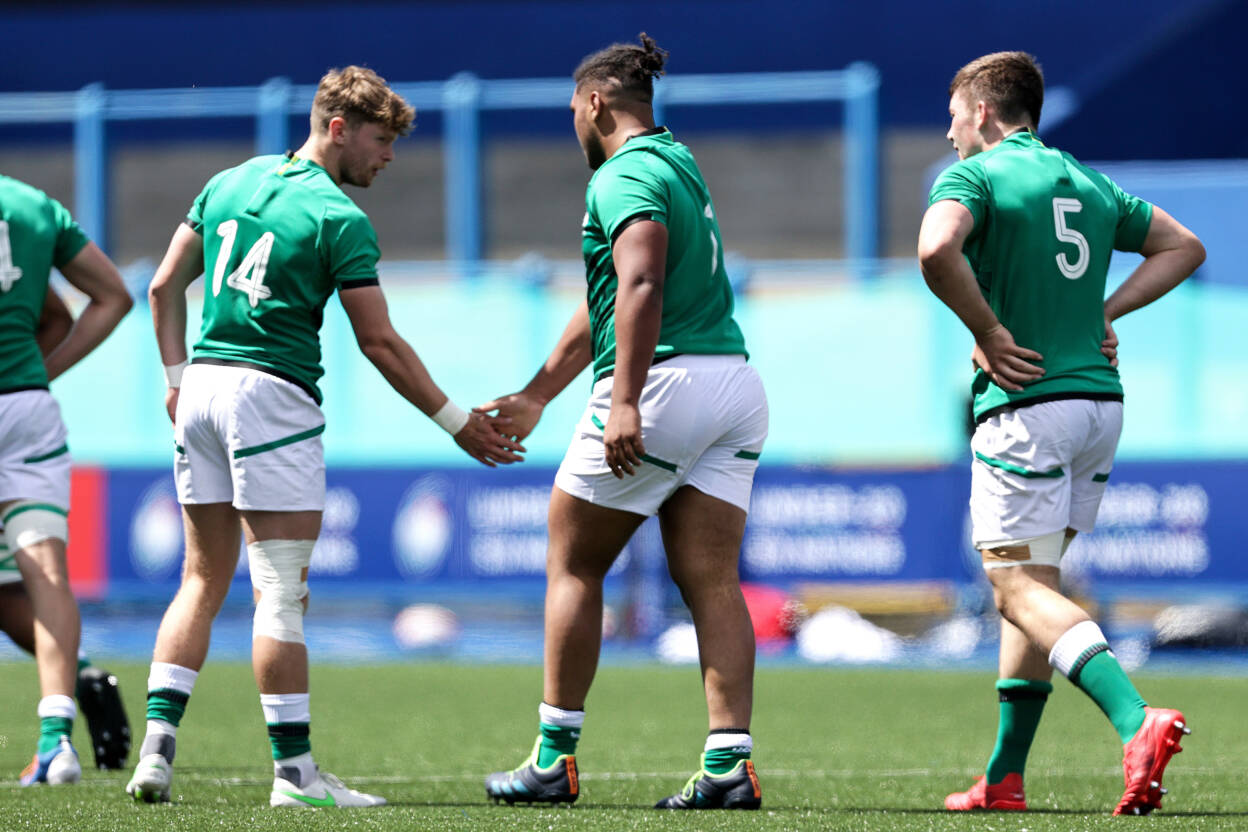 However, Murphy’s charges were soon behind their own posts after Humphreys’ missed tackle – and the absence of Postlethwaite – was exposed by his opposite number Marin’s pacy 15-metre dart for the line. He added the tricky conversion himself.

Chay Mullins’ covering and the big left boot of Jamie Osbourne prevented Italy, who were building some fluid attacks, from adding to their lead near the half-hour mark.

Kendellen was isolated off a scrum in the 32nd minute, allowing the Azzurrini to force a 24-metre penalty which Marin turned into three points.

With their scrum exerting pressure and centre Tommaso Menoncello proving elusive, Italy continued to look the better team. A monster penalty strike from Marin put 11 points between the sides at the break. 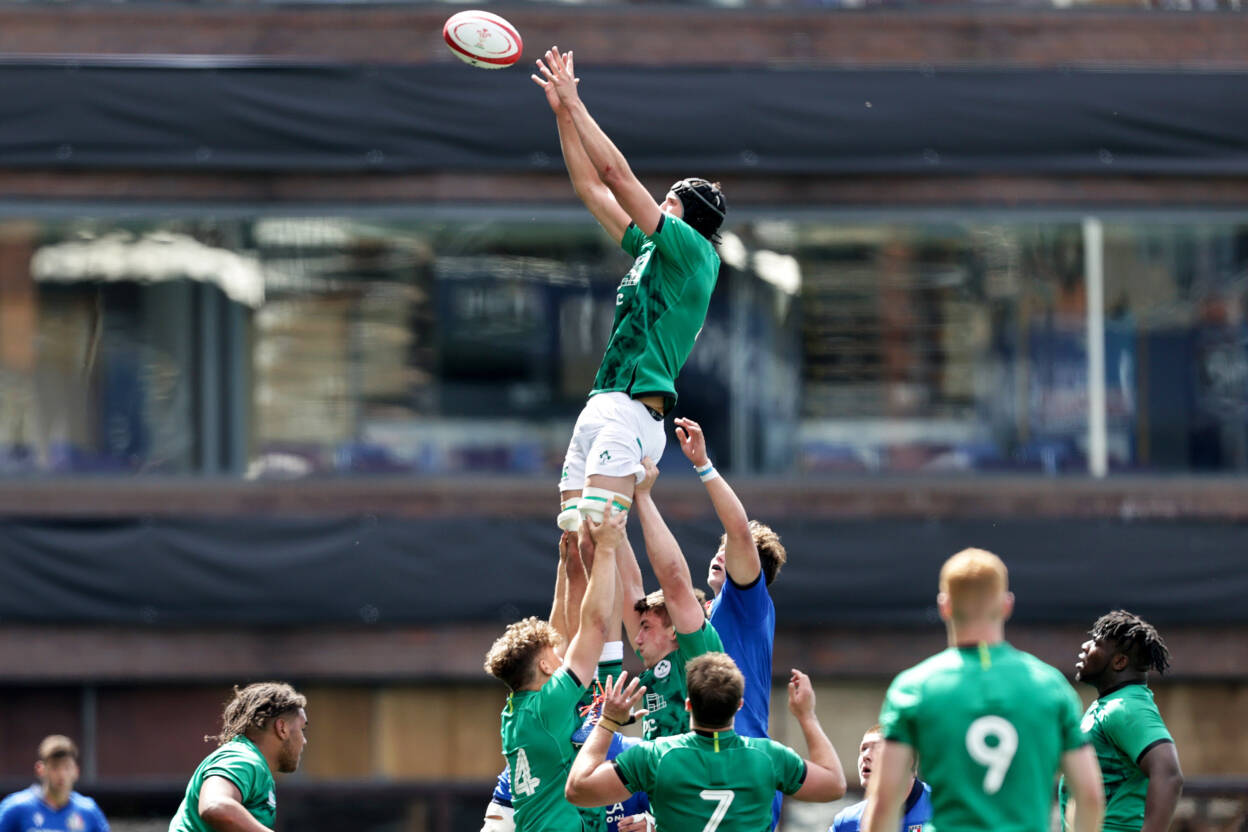 There were better signs from Ireland on the resumption, Mark Morrissey rising to steal a lineout and Kendellen winning a turnover penalty.

Their attack was suddenly firing, Kendellen and second row Sheridan doing really well to keep the ball alive before the former burrowed over from a few metres out.

Doak swept over the conversion for good measure, pulling it back to a four-point game, and a barnstorming run by tighthead Sam Illo preceded Andreani’s yellow for going straight off his feet. 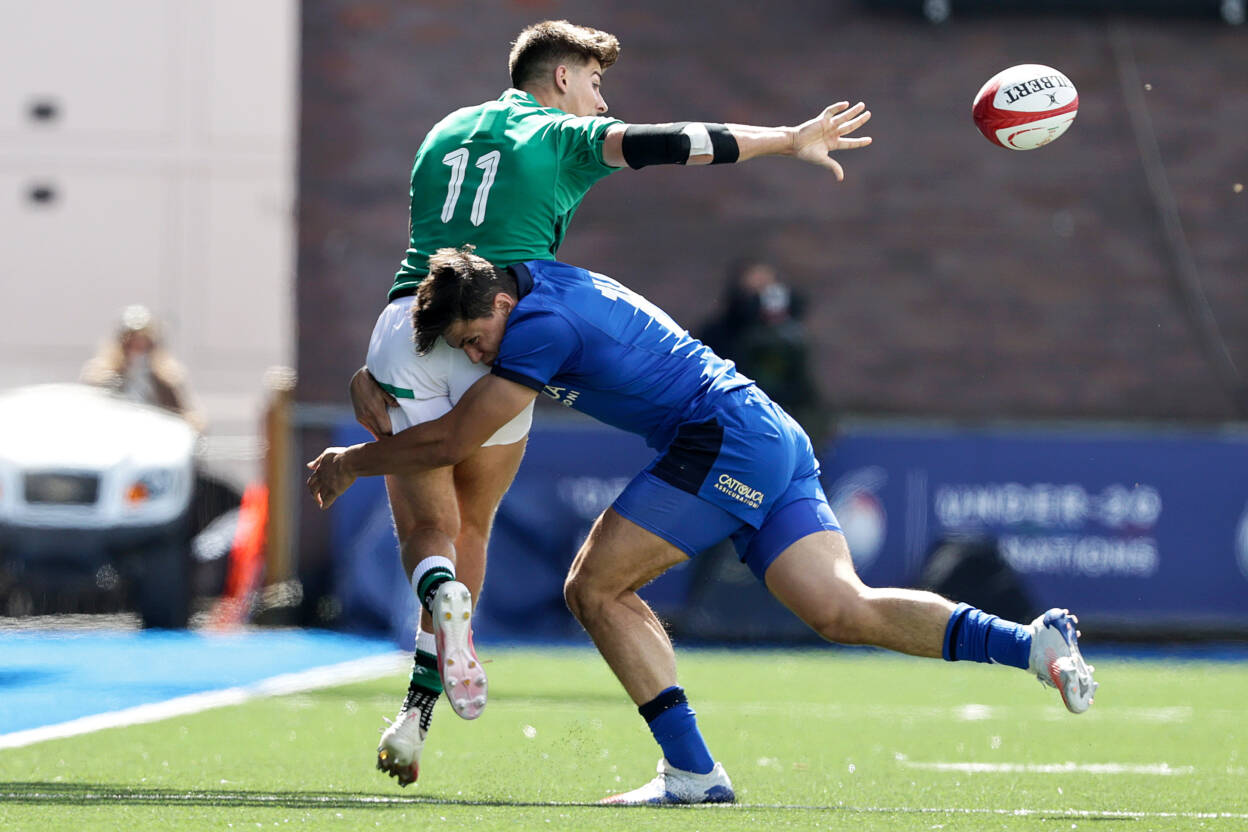 Doak was successful with the resulting 51st-minute penalty attempt, reducing the margin to the minimum. Postlethwaite’s crunching tackle led to another momentum shift, two subsequent penalties getting Ireland into scoring range.

Their maul was rewarded again, good control leading to Kendellen reaching over to complete his brace. Doak’s conversion attempt unfortunately flicked away off the right hand post.

Ireland remained 27-23 in front thanks to an Alex Soroka turnover from improved maul defence, before a Marin penalty miss let the defending champions off the hook.

Soroka and replacement Reuben Crothers then dug furiously to earn another turnover, before the former showed his offloading and kicking skills to help Ireland move back downfield.

Italy kept out the Irish maul but their discipline was poor during their closing stages. A second breakdown infringement in quick succession set up Doak for the close-in place-kick that decided the outcome. 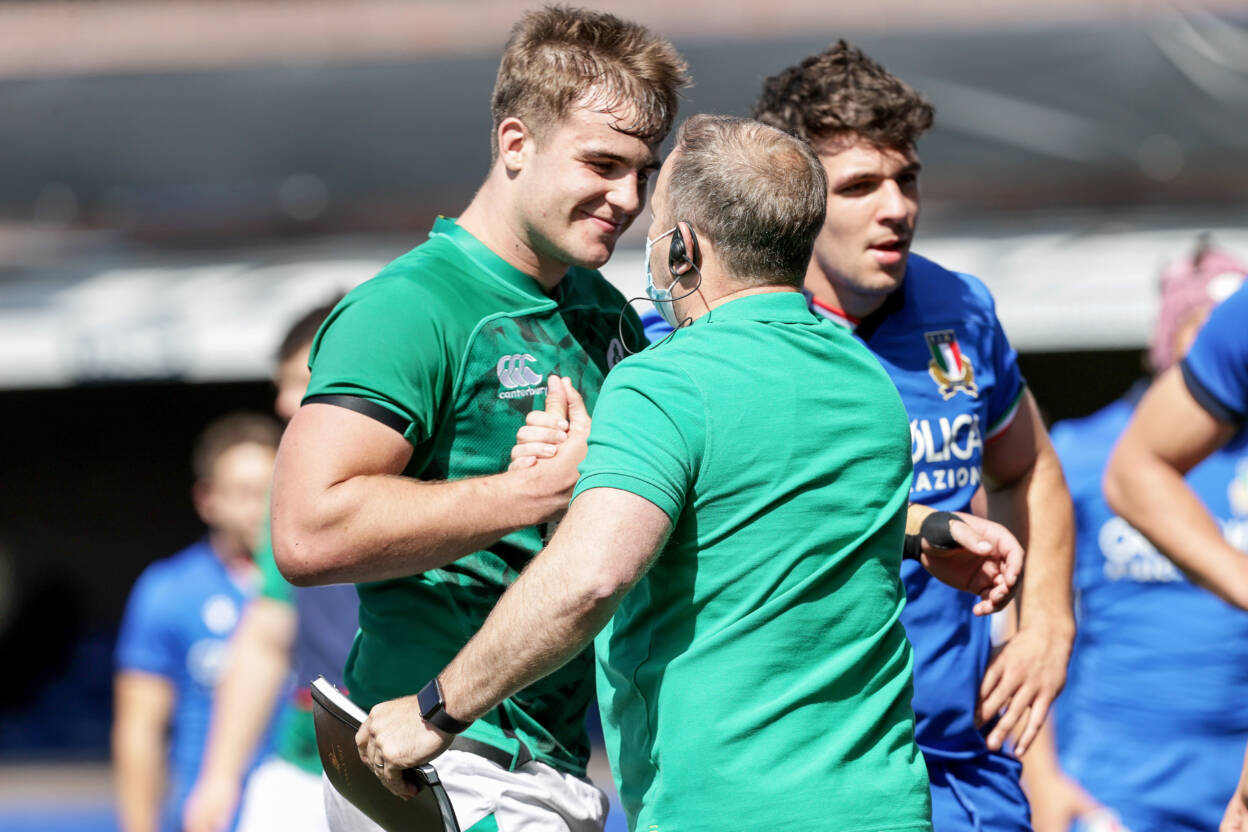 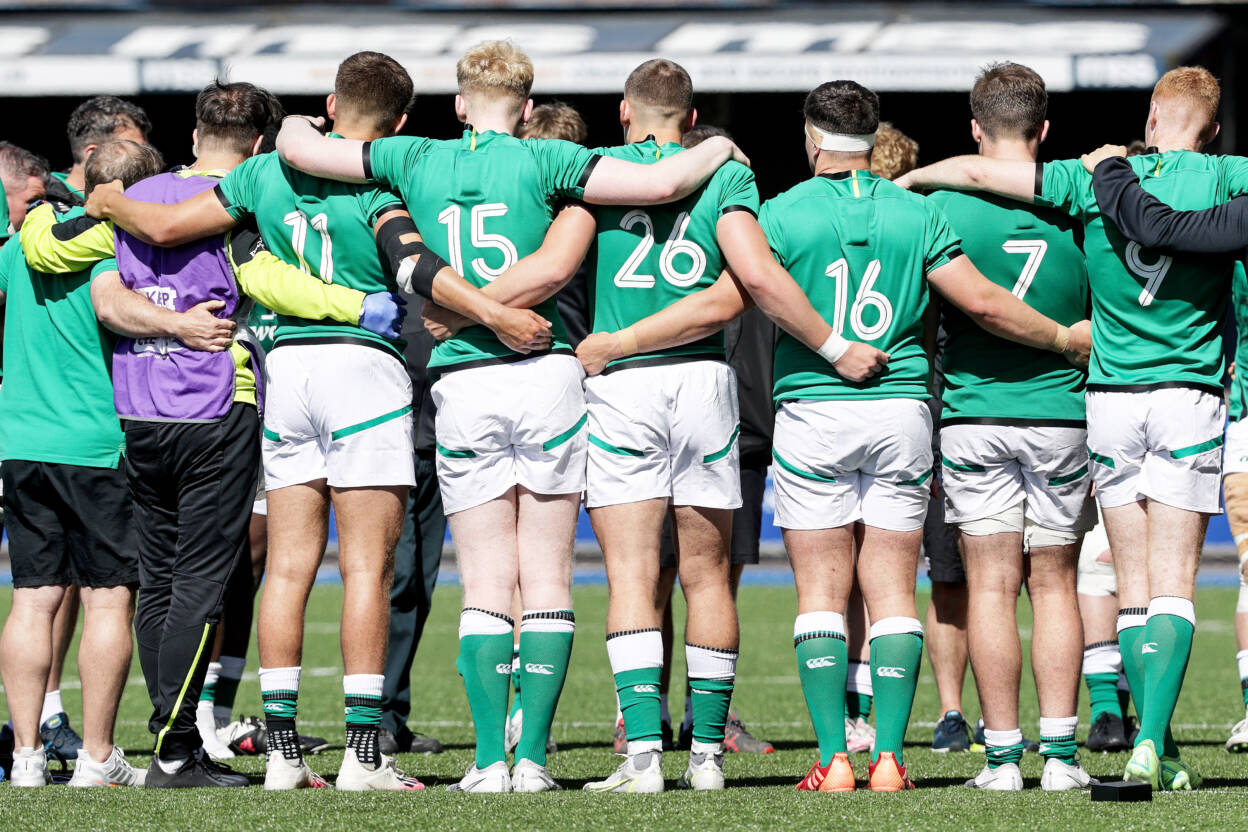