Ireland Under-20 starlet Sean French’s timely try on the stroke of half-time helped to catapult Cork Constitution to a 23-3 semi-final win over Dublin University at Temple Hill this afternoon.

Brian Hickey’s table toppers will contest Con’s fourth successive league final, clashing with second-placed Clontarf at the Aviva Stadium next Sunday (kick-off 3pm) in a repeat of the 2017 decider which they won 25-21.

The cup and league specialists, who had defeated Trinity 24-13 at home earlier in the season, called on all of their trophy-winning attributes to restrict Trinity to a mere penalty just before the end of the opening quarter and then keep the scoreboard ticking along in their favour. 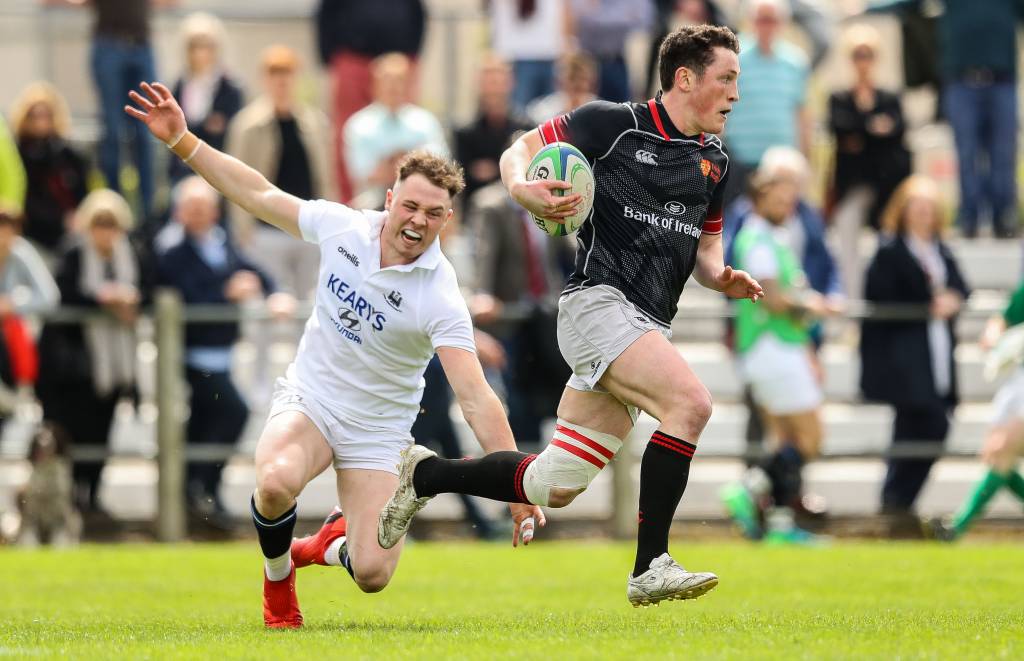 Tony Smeeth’s attack-minded side had a busy build-up to their historic semi-final appearance on Leeside, with their Under-20s retaining the Fraser McMullen Cup last weekend and 14 members of today‘s senior matchday squad taking exams yesterday before boarding the bus for Cork.

Their back-three was reinforced with the presence of fit-again captain Colm Hogan and Leinster’s Michael Silvester and Jack Kelly, and they had high hopes of putting it up to Constitution, having defeated them 37-13 at College Park last month when the league leaders were down a few bodies.

A breathless first quarter produced only one score, a well-struck 18th-minute penalty from the students’ out-half Micheal O’Kennedy who rifled over from the edge of the 22. His opposite number Aidan Moynihan levelled with his first place-kick of the afternoon in the 27th minute, and then added a second for a hard-earned lead. 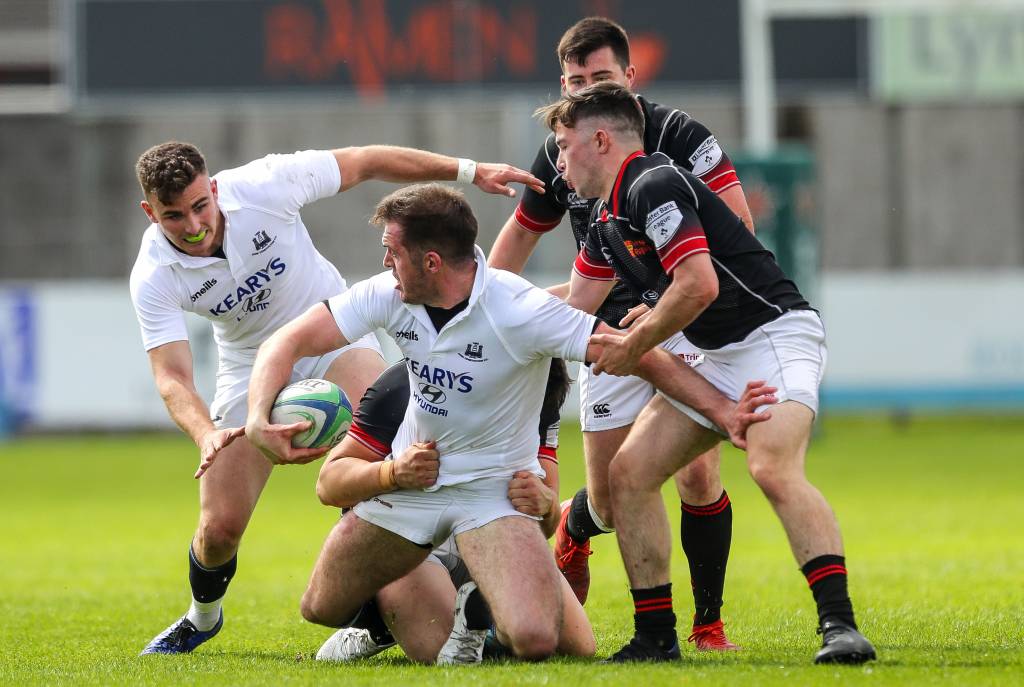 Hickey’s charges struck a big blow in the first half’s final play to go 13-3 in front. Profiting from a turnover on the Trinity 10-metre line, Grand Slam winner French was fed on the right wing by Shane Daly’s looping pass and he jinked past O’Kennedy, collected his own kick on the bounce and weaved in past James Hickey to score a classy solo try. Moynihan’s conversion opened up a 10-point buffer.

Smeeth’s youngsters fell further behind courtesy of man-of-the-match Moynihan’s third penalty success, just two minutes after the restart. A critical period came during the third quarter when Con had a one-man advantage due to Trinity number 8 Niall O’Riordan’s sin-binning for a no-arms tackle.

Credit to the 14-man students, they managed to create their best opportunity as Hogan embarked on a thrilling run through the middle. It took a well-timed tackle from full-back Liam O’Connell to deny the Trinity skipper a probable try about 15 metres out, but further pressure did yield a penalty inside the Constitution 22.

Unfortunately for the vocal travelling support, usually-reliable hooker Dan Sheehan could not connect with his jumper at the lineout and Con’s ambition in this high-quality semi-final tie was evident in the manner of their counter attack involving the dangerous French. 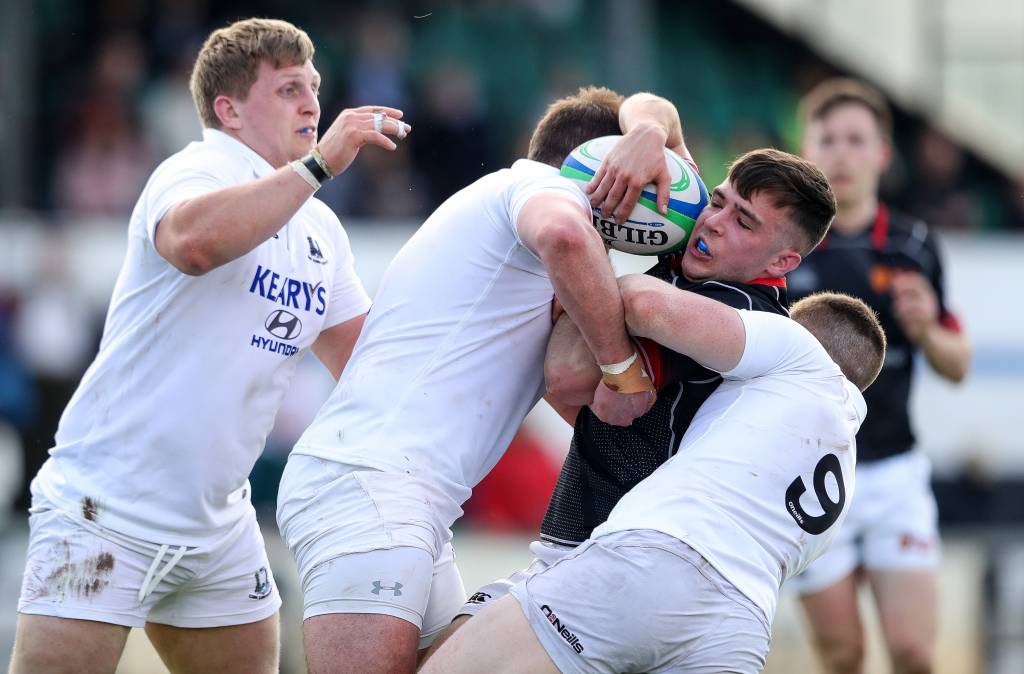 Con’s progression through to the final was underpinned by a powerful defensive display which continued to frustrate the students. The outcome was decided on the hour mark when Munster’s Daly dislodged possession from Philip Murphy with a man-and-ball tackle, allowing Rob Jermyn to dribble through and the onrushing Moynihan kicked ahead before winning the race to touch down. He converted to complete his handsome 18-point haul.

Speaking after the game, Cork Con senior coach Paul Barr said: “It was a Test game of rugby out there with some real quality on that pitch. They had players who played for Leinster this season and we had players that played for Munster. I thought it was a fantastic collective effort and probably shown by the way we defended.

“I think the boys’ focus going into the game today was just first class. Every element of our game – our set pieces, our defensive organisation, our offence, our confidence to attack them and keep them under pressure – was really excellent today. It gives us another opportunity to go the Aviva Stadium next week.”

Trinity’s director of rugby Smeeth admitted his side were unable to breach the ‘white wall’ of Cork Con’s defence. “This is a big step up for us,” said the long-serving coach. “There’s no doubt that game was a level up from any other game we’ve played this year, which it should be.

“They tried to stop us playing and they did it really well. We just couldn’t get quick ball and that’s what our whole game is about. They’re clinical. They took their chances. I actually think keeping them to two tries was good on our part because they did have a lot of pressure.”