The winners of the 2020 Munster Rugby Awards were announced today with 11 individuals, clubs and schools recognised for their achievements.

As well as supplying regular attendees at regional workshops the club has also hosted coaching courses and club workshops.

The west Cork club have strongly engaged in the club and school hub programme and have a presence in ten primary schools, through both Munster Rugby Club Community Rugby Officers and their own Club Development Officers.

During the season they organised two school blitz days, with in excess of 800 participants. These were both fantastic days out and were very well marshalled by club volunteers and coaches.

The club has girls teams at Under-8, Under-10 and Under-12 level, taking part in girls-only West Cork blitzes.

The club works extremely hard at minis and youth levels to maintain and grow their playing numbers each season.

With all coaches fully accredited, they were among the first clubs in the province to be Covid-19 compliant for a safe return to rugby.

The Kerry club have successfully formed an Under-14 girls squad for the current season and in supporting the ongoing work and growth of youth and mini rugby, Killarney is often represented at regional and provincial committee level.

For the second year in a row, the School of the Year award goes to Christian Brothers College, Cork.

The path to both finals was highly impressive with six wins in each competition, including topping their respective pre-Christmas groups in the newly-introduced format.

Further success over the season saw the school win both the Barry Cup (Under-19) and the Kidney Cup (Under-16), while also making the final of the McCarthy ‘B’ Cup (Under-15).

A season full of highs, the school’s rugby programme once again has led to impressive success.

Since its formation in 1981, Kilfeacle & District Rugby RFC have become one of the strongest and most consistent clubs in Munster junior rugby.

2019/20 was a particularly special season for the Tipperary club, as they completed a unique double by winning both the Energia All-Ireland Junior Cup and the Munster Junior League Division 1 title.

On the back of this success, they were invited to participate in this season’s Bank of Ireland Munster Senior Challenge Cup where they defeated Bruff in the opening round, before eventually bowing out to Shannon. 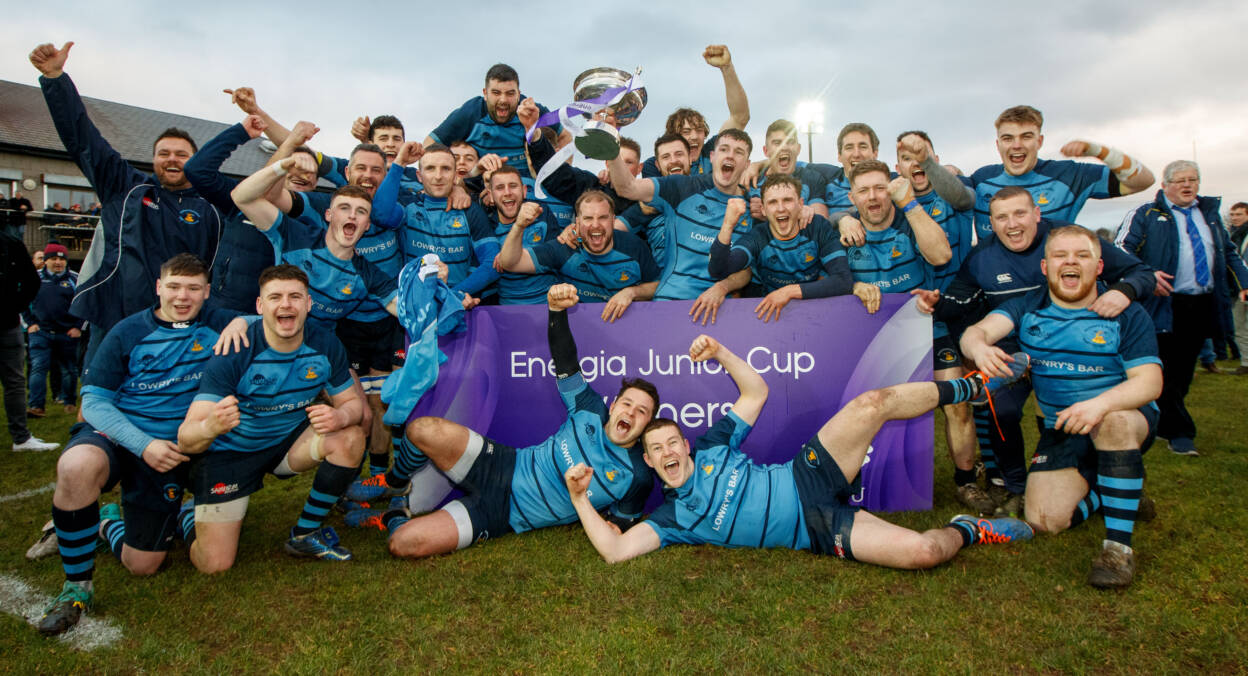 Prior to the early conclusion of the 2019/20 season, Cork Constitution held a commanding 13-point lead at the top of Division 1A of the Energia All-Ireland League, having won all 14 of their games up to that point.

Indeed, their last league defeat came in March 2019. While Covid-19 denied them the opportunity of retaining their title, they had already captured silverware in the form of the Bank of Ireland Munster Senior Challenge Cup and the Cork Charity Cup.

In securing cup successes and league victories, the Cork outfit were undefeated in all 19 competitive fixtures last season. 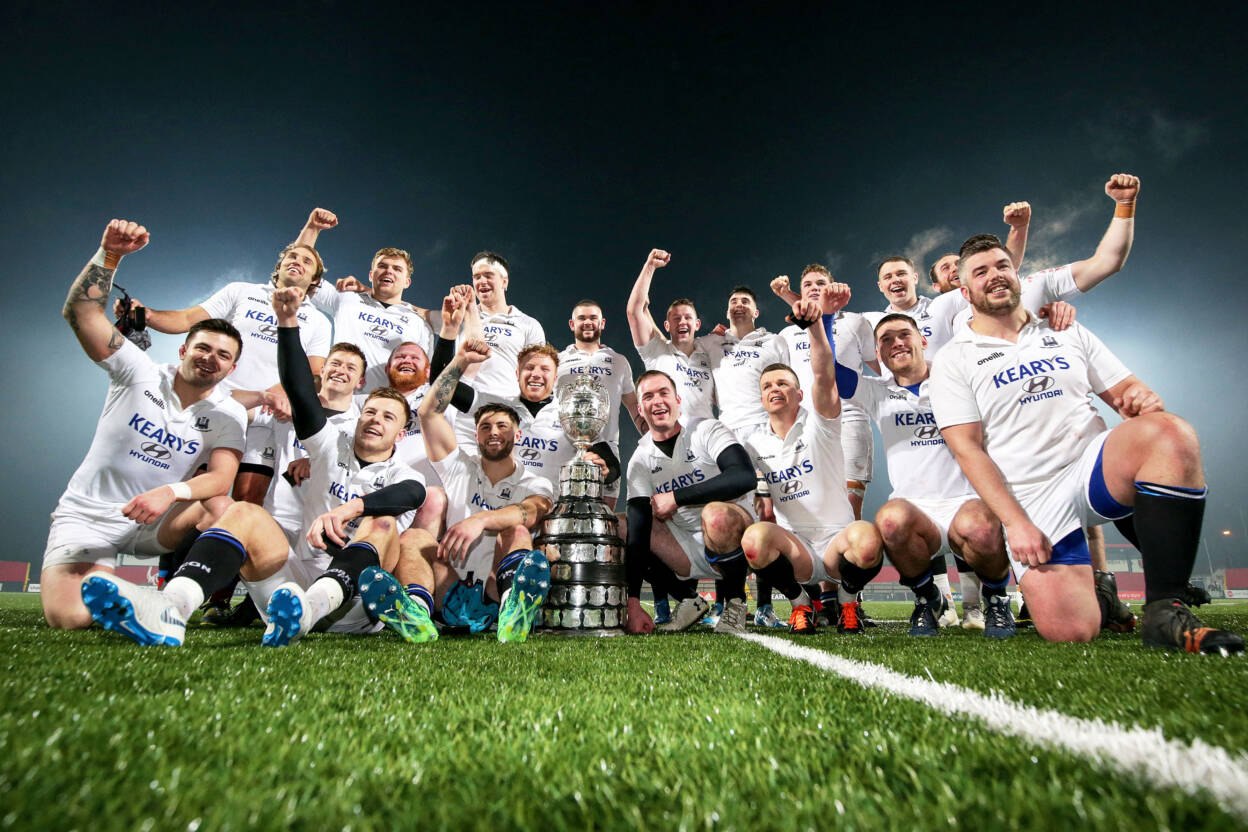 Referee of the Year – Eoghan Cross

Eoghan joined the MAR in 2016 and straightaway showed good promise as a referee. He progressed from age grade into adult rugby during that initial season.

He earned promotion to the IPAS group in 2017 and made the IRFU National Panel for the 2018/19 season, refereeing across all Division 2 of the All-Ireland League that season.

Since the resumption of rugby, Eoghan refereed the pre-season challenge game between Connacht and Munster in Galway and has progressed to assistant referee level in the Guinness PRO14. 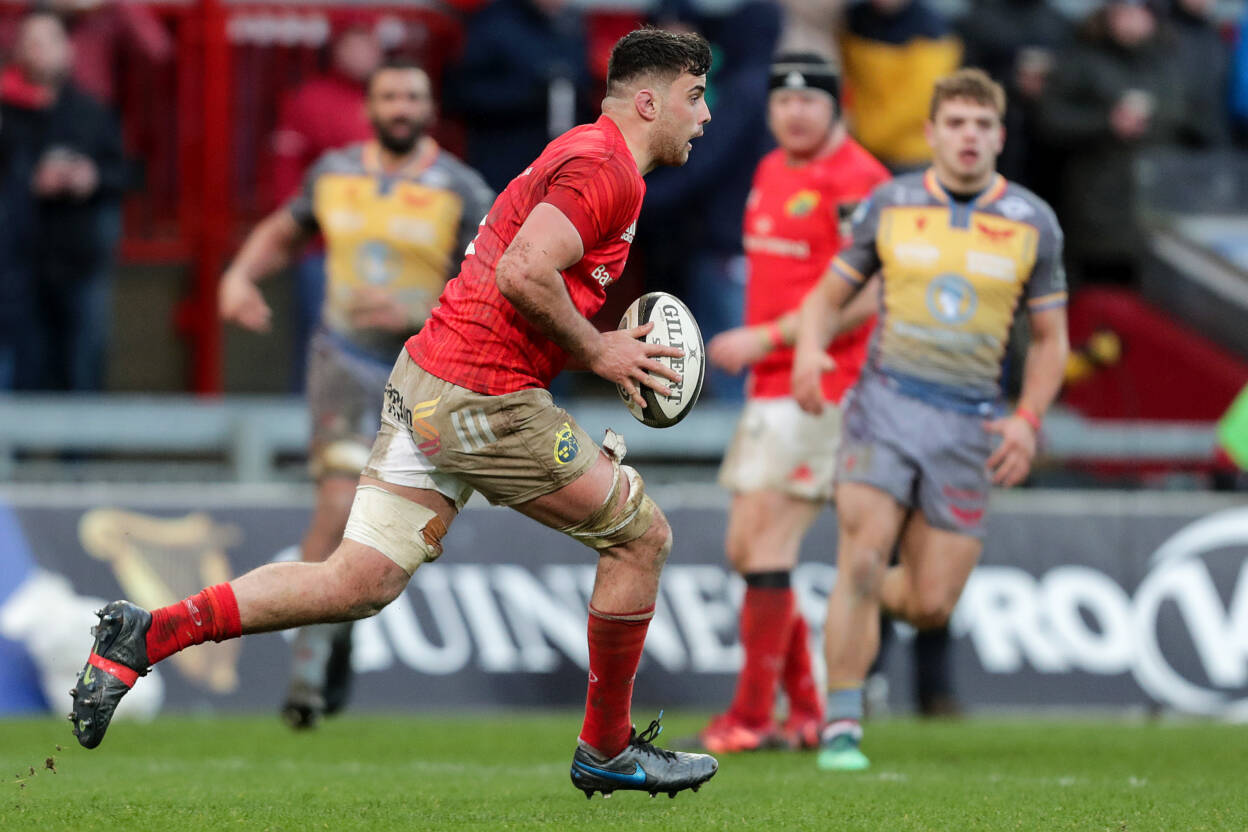 Having missed out on a year of rugby due to long-term injury, Jack showed great resilience to come back and mark his final season in the Academy with debuts in the Guinness PRO14 and the Heineken Champions Cup.

The 22-year-old went on to make eight competitive appearances and scored his first Guinness PRO14 try against the Scarlets in February.

The number 8 showed such impressive form and glimpses of what is to come that he secured a three-year contract and joined the senior squad at the start of this season. 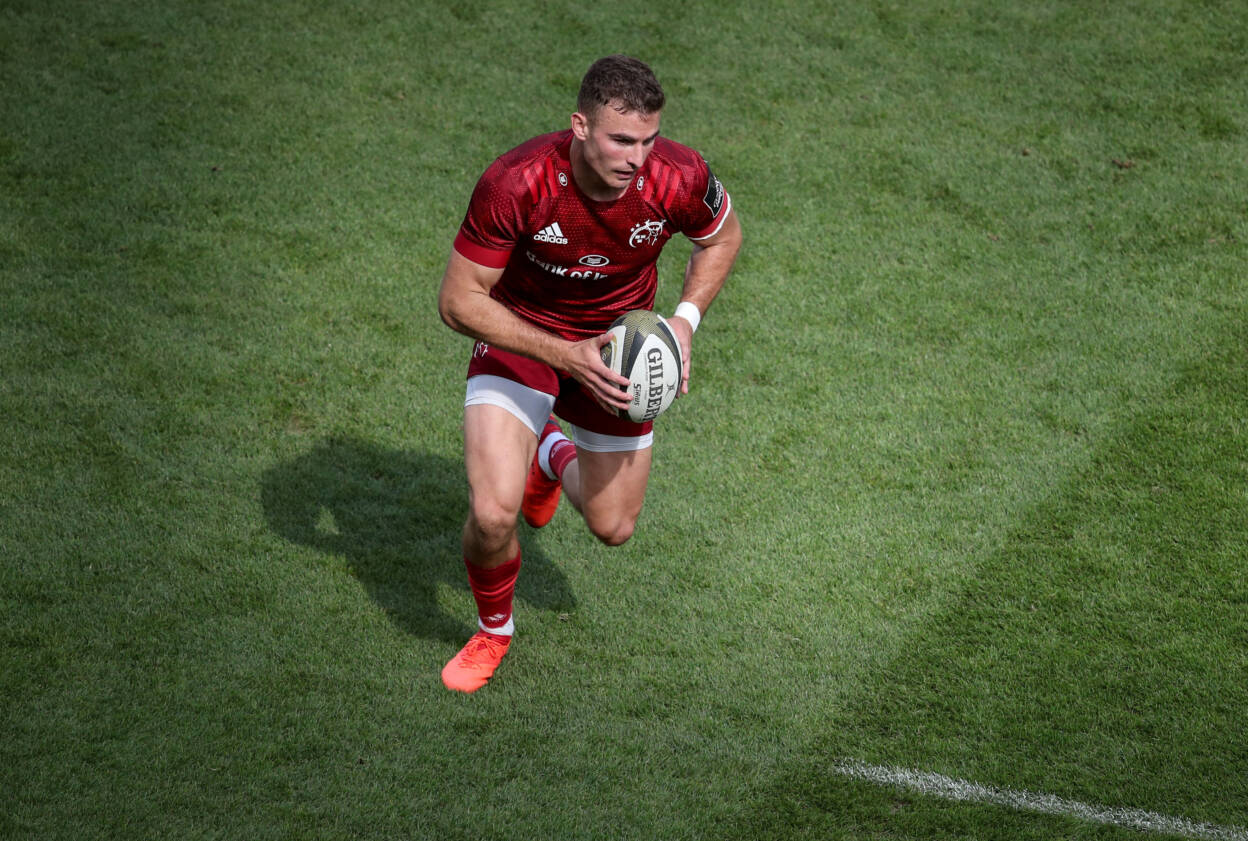 Shane enjoyed a breakthrough campaign in his first year as a member of the senior squad. He started 13 of his 14 appearances in red on the wing and at full-back and made his Champions Cup debut against Racing 92 in Paris in January.

A product of the Greencore Munster Rugby Academy, the 23-year-old started the season brilliantly and won both player-of-the-match awards in Munster’s first two games of the 2019/20 season.

Impressing in the Munster back-field, the Cork native also scored four tries and recently earned his first call-up to the Ireland 15s squad.

Sarah began playing rugby for Young Munster RFC and subsequently moved to Richmond RFC before making the step up to playing in the All-Ireland League with UL Bohemians.

The Limerick native is well known in rugby circles as a dynamic and powerful ball-carrying back rower.

Since making her debut for the Munster Women’s team in 2018, she has been widely regarded as a game-changer at both club and provincial level, regularly getting on the scoresheet.

A player who gives full commitment to each training session and match, Sarah is well-deserving of the Women’s Player of the Year accolade. 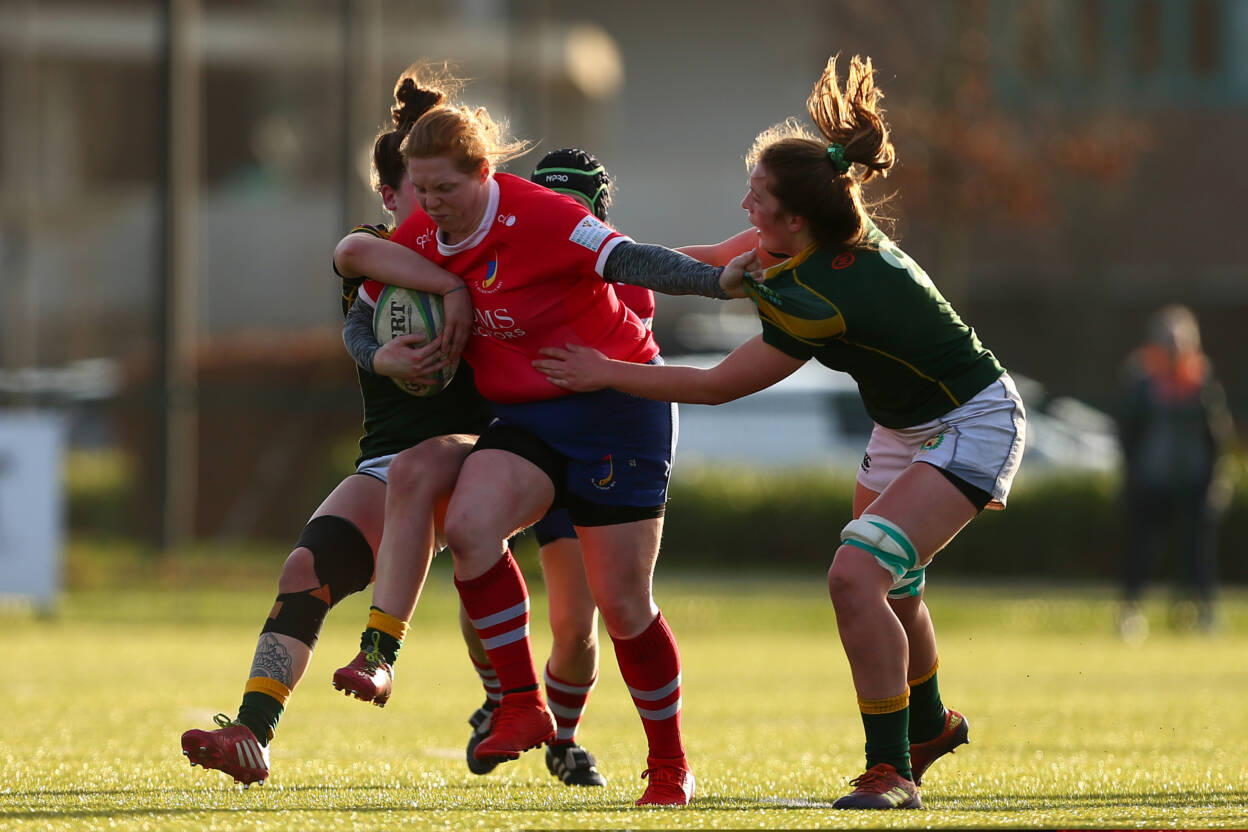 Once again CJ raises the bar as he is awarded the Munster Rugby Men’s Player of the Year for a record third time in six years.

In making 11 starts, the 30-year-old captained the province on two occasions and produced a player-of-the-match performance against Saracens at Thomond Park last December.

A standout performer on every occasion, he topped the charts for carries in the Champions Cup with 120 carries after the six pool games.

Stander’s performances never dip with an incredible work ethic at provincial and international level. He is once again deservedly named the Men’s Player of the Year.

Posthumously inducted into the Hall of Fame, Garrett was the province’s CEO from 1999 to 2019.

The longest-serving provincial chief executive in Irish Rugby, Garrett spearheaded Munster’s rise in the professional era and oversaw a 20-year period that produced the greatest days for the province, with successes on and off the field.

A man who showed great humility, he always ensured it was never about him, and it was always about the people of Munster Rugby.

In his leading role he shaped the province’s story through his hard work and committed service, leaving an everlasting legacy.