Teenage sensation Beibhinn Parsons had a Connacht senior debut to remember as she helped her side qualify for the IRFU Women’s Interprovincial Championship final where they will face unbeaten Leinster, who put 59 points on Ulster in today’s second semi-final.

The Leinster Women proved too strong for fourth-placed Ulster as they booked their place in the Women’s Interprovincial decider with a resounding 59-3 win at Templeville Road this afternoon.

It took the defending champions just three minutes to score the first of nine tries in a ruthless semi-final performance. They looked more than comfortable in the opposition 22 and Ireland centre Michelle Claffey’s finish looked like a statement of early intent.

Key half-back Jemma Jackson and captain Beth Cregan combined to earn Ulster some positive territory early in the second quarter and Jackson dispatched a penalty through the posts to give Ulster a foothold in the game.

Leinster’s response was swift and after Linda Djougang’s initial break, fellow prop Lindsay Peat scored courtesy of a strong hand-off. The Blues’ scrum was the main weapon for their third try as second row Clodagh Dunne scored under the posts to give her side a 19-3 lead at the break.

Any hopes of an Ulster comeback were killed off in a devastating spell from Ben Armstrong’s side between the 45th and 50th minutes. Larissa Muldoon was credited with a try after another example of Leinster’s power game. Megan Williams was next to score and the rampaging Lindsay Peat grabbed her second just moments later. 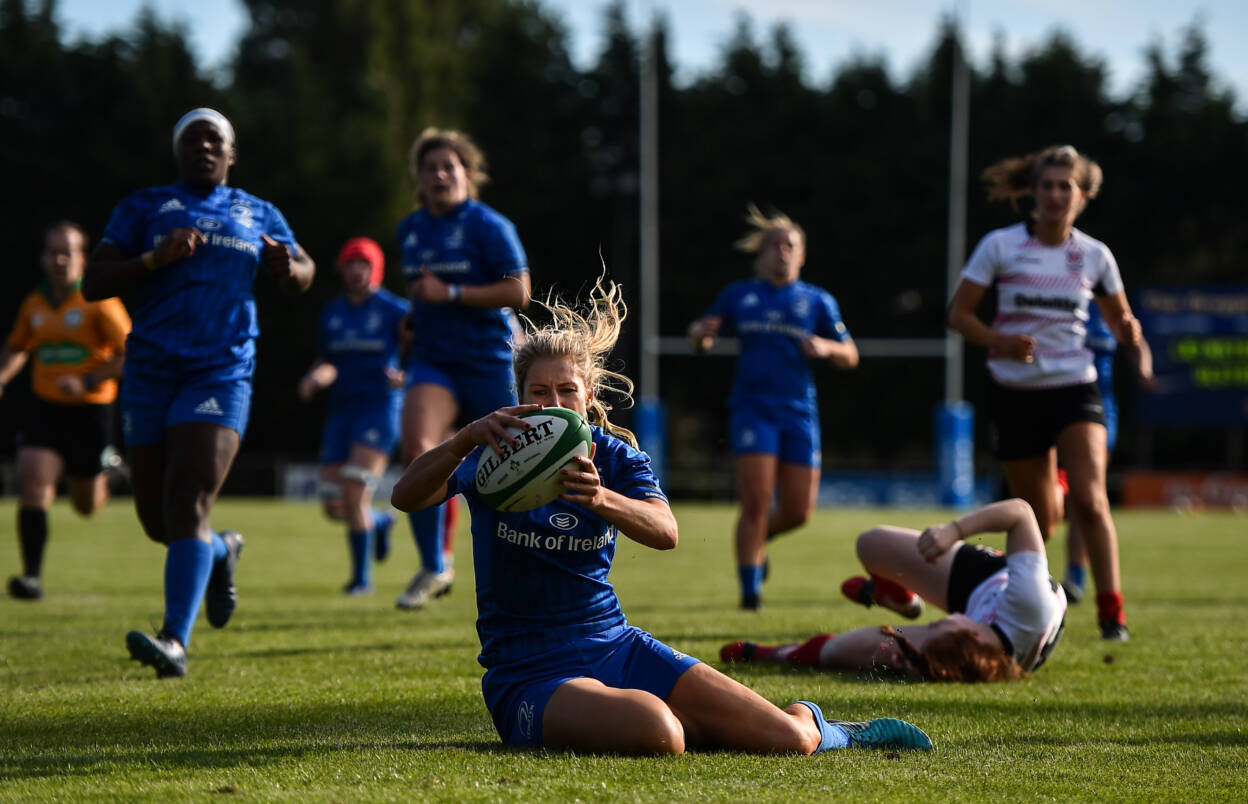 Leinster captain Sene Naoupu is confident there will be no room for complacency in the coming week after such a dominant performance. “We certainly have a lot to work on,” she insisted. “We’re getting better at reacting to certain situations on the pitch.

“We’re proud of all the girls who represented the jersey today. We’re glad that we were able to express ourselves in that way and we’re humble and grateful to make a Championship final.”

Leinster’s use of their bench did not stall their momentum either as replacements Molly Scuffil-McCabe and Katie O’Dwyer joined Elise O’Byrne-White on the scoresheet as they took the winners’ try tally to nine in the end.

“The calls are tight in selection and the girls are looking for any chance to impress,” said their Australian head coach Armstrong. “We were looking at process more than anything so we went out there to play and the girls had the right to make the decisions on the pitch.

“There were a few too many loose passes once we’d made the line break in the first half, so we tightened that up in the second half and that paid dividends.”

In another notable positive for the title holders, their goal-kicking number 8 Hannah O’Connor cemented her place at the top of the scoring charts with seven successful conversions from the tee. The Blackrock star has now contributed 38 points across the four rounds.

They were Ireland team-mates last season, and now Beibhinn Parsons and Alison Miller are spearheading Connacht’s shot at Women’s Interprovincial glory after the wing duo did all of the scoring in a thrilling three-point win over much-fancied Munster.

Ballinasloe teenager Parsons, who recently captained the Ireland U-18 Women’s Sevens team, enjoyed a dream senior debut for Connacht as she slalomed over for three tries, while retired Ireland great Miller showed her class again with a 67th-minute match-winning score.

In Brian McClearn’s first season at the helm, Connacht had suffered chastening defeats to Leinster and Munster in the opening rounds, but they showed signs of progress in winning away to Ulster two weeks ago and were too good for Munster today in the Dublin sunshine.

Determined to show the form which saw them win 27-6 at the Sportsground last month, Munster opened the scoring with a fifth minute penalty from young centre Enya Breen, who took on the place-kicking duties for the first time for her province.

Connacht enjoyed the better territory, however, and 17-year-old Parsons rode a tackle down the right wing to score in the corner. With the westerners’ scrum on top, out-half Meabh Deely had the platform to scythe through Munster’s back-line soon after. The scoring pass went out to Parsons – her team-mate from last year’s U-18 Interpro title-winning team – and Connacht suddenly led by seven points. 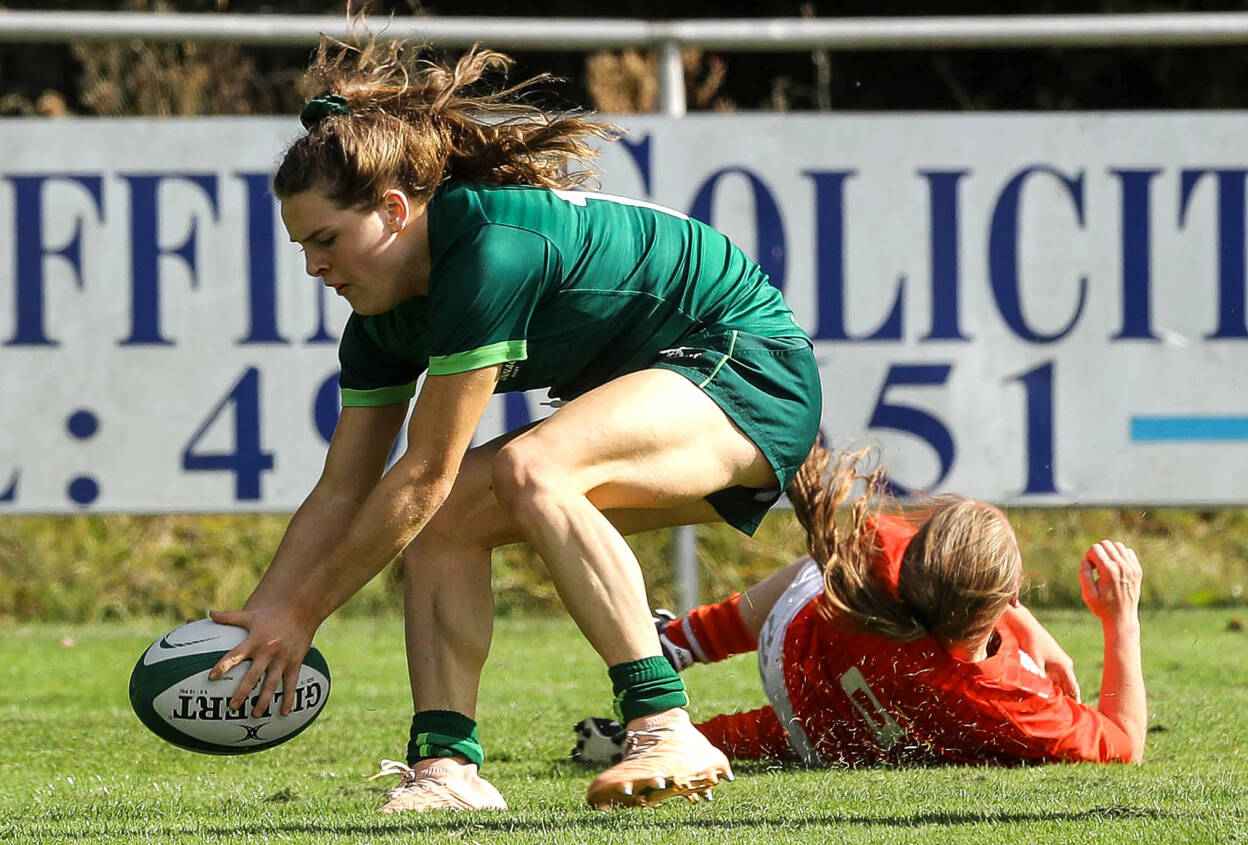 Munster bounced back to level this absorbing contest at 10-all before half-time, a bullet pass from Nicole Cronin exposing some narrow defending and putting co-captain Eimear Considine into space on the left wing to finish in the 33rd minute.

Connacht’s indiscipline threatened to derail their game-plan during the third quarter as Laura Guest’s side inched closer and took the lead after 51 minutes when industrious number 8 Sarah Quin grounded the ball close to the posts.

Nonetheless, with just over a quarter of an hour mark, Parsons outfoxed Munster’s drift defence with a sharp turn to complete her hat-trick. Turning some of their best attacks into scores shows the progress being made by a Connacht squad who had only opened their try account in the last round.

“Having Beibhinn on the ball – she was a threat all the time,” said player-assistant coach Miller afterwards. “It’s a great result. I thought we showed our true potential today. We have a very young squad. We have girls coming up from the Under-18 set-up and from outside the Energia All-Ireland League and it was great to get them three games before taking on knockout rugby.”

It was Miller who wrestled back the lead for McClearn’s charges, breaking the cover and shipping two tackles on her way to the line. With nerves jangling, Connacht were relieved to watch Breen’s first miss of the day in the 75th minute – a penalty for not rolling away that would have drawn the game level.

Munster had possession in the final moments to try and manufacture a scoring opportunity but were met with a well-organised defence and some tenacious tackling, typified by ever-willing openside Edel McMahon. This was Connacht’s day.