With 13 senior provincial appearances already under his belt, Ulster winger Angus Kernohan is the most experienced player in the current Ireland Under-20 squad. The newly-turned 20-year-old is in his second season as an U-20 international and first year on a full Academy contract at Ulster Rugby.

Kernohan missed the Ireland U-20s’ opening two wins over England and Scotland with a hamstring injury, but returned to make his 2019 debut in their 34-14 bonus point triumph away to Italy. Head coach Noel McNamara was keen for the former Ireland Under-18 Sevens captain to make his presence felt in the back-three.

“Having spoken to the coaches before I came into camp, they put an emphasis on coming in and trying to increase the communication within the team. Trying to lead from the front. Obviously there’s extremely good leaders within the squad and I try just to play a part, and be a team player,” said Kernohan, speaking ahead of Friday’s mouth-watering clash with France at Irish Independent Park (kick-off 7.15pm).

“Particularly in the back-field there has to be a lot of talk and it’s something I try to bring to the squad. In fairness, all the other guys are at that same level as well. When you’re on the pitch, it’s not about who is the most experienced. It’s just trying to bond together as a team. Hopefully I bring a certain amount of communication and maybe leadership to the other guys.”

A 72-minute run-out against the Ospreys in the GUINNESS PRO14 last month primed the Queen’s University clubman for his international return, with the result in Rieti keeping the Ireland U-20s in pole position. He admits it was challenging to be drafted into the team mid-Championship, but the team’s impressive form made it a simple transition.

“You pretty much get a phone call telling you, you’re either in Dublin or you’re either in Belfast. There’s a hunger to play for both obviously. You want to play for your province and get professional experience, but playing for your country that’s a real privilege. I’m glad the way it has worked out this year, having that opportunity to play both.

“I’ve got another opportunity this week to pull on the green jersey again and do my country proud hopefully. I was obviously coming into a camp where the team has been doing so well. It made it a lot easier. There’s still challenges sometimes because you feel like you haven’t been part of it. I’ve known a lot of these guys for a long time now.

“There’s a real emphasis on bonding as a team, on and off the field. Thankfully they’ve all welcomed me in well and it was great to get over there in Italy, get back into the team and get a good win.”

Last summer’s appointment of Jared Payne as Ulster defence coach coincided with Kernohan’s rise to secure a full Academy contract at the province. The former Ulster and Ireland centre has played a key role in helping the talented youngster to develop his game, but he is by no means the only influence.

“Thanks to Jared Payne I’ve been able to positionally develop as a player. In terms of reading the play and being able to adapt to how the opposition are playing. Also, I’ve just got more confidence now to back my ability. More confidence to take players on and hopefully express myself as well,” he explained.

“When Henry Speight was over here, he took a real interest in my development and was a really, really humble guy in how he applied himself. Jacob (Stockdale) is brilliant as well. Gilly (Craig Gilroy) before he got injured, he was brilliant and Will Addison. I really could name them all. It’s a pleasure for them to be able to help the younger boys. It’s something that helped me a lot, to bond with them as well.” 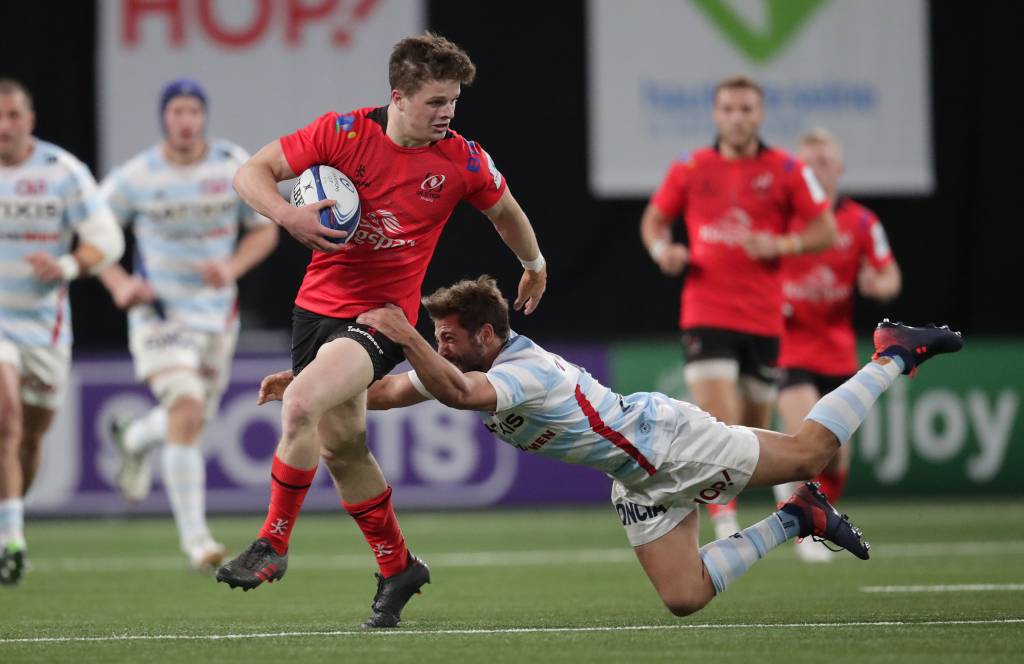 It’s interesting to note how much Kernohan has learnt from Stockdale, who is now an established first team regular for both province and country. It serves to highlight how rapid the 22-year-old Lisburn man’s development has been in recent years.

It was less than three years ago that Stockdale featured in the World Rugby U-20 Championship final for Ireland in Manchester, alongside fellow senior stars James Ryan and Andrew Porter. He used the international age-grade rugby as a launchpad into the national camp and Kernohan is hoping to follow a similar path.

“The exposure that the Under-20s can give you and when you’re playing with guys at the same age, it can give you confidence when you’re coming to play with them. For him (Stockdale), it really gave him that confidence to express himself. That’s something I want to keep developing, is that ability to express myself and to back myself.”

Like most modern-day players, Kernohan has interests and ambitions outside of rugby. Although the sport has been his passion from a young age, he also has a desire to further his education. The demands of his favoured course at Queen’s University led to a deferral, but he plans to resume his studies in the near future.

“Both of my parents studied medicine, so for me that was always something I was interested in. I had an offer for a couple of Unis to study medicine. I had that decision to make, but for me since I was boy, rugby has always been my dream.

“I’m glad now that I took the road to try and play rugby. Hopefully just keep my head down and stay on that road as long as possible. Just because Queen’s medicine is nine to five, and there’s a lot of commitments with it, I’m not currently studying. But next year I’m planning to study,” he added.

Over 5,500 tickets have already been sold for what promises to be a very entertaining Under-20 Six Nations match between leaders Ireland and defending champions France in Cork – click here to buy your ticket(s).