Amee-Leigh Murphy Crowe achieved another magical milestone as she was confirmed as the top try scorer in this season’s HSBC World Rugby Women’s Sevens Series, following the completion of the sixth and final leg in Biarritz.

Murphy Crowe, who captained a youthful Ireland team at the HSBC Biarritz Sevens, added four more tries across the weekend to finish the 2018/19 campaign with 35 tries (in 33 matches). Canada’s Bianca Farella was second on 34 tries with Michaela Blyde (New Zealand) and Ellia Green (Australia) tied for third on 30 each.

Despite Murphy Crowe’s individual success, there was double disappointment for Ireland as they were beaten by England (24-17) and Scotland (26-14) at Stade Aguiléra earlier today. While obviously frustrated with a twelfth place finish in Biarritz on the back of finishing bottom of Pool B yesterday, the IRFU Women’s Sevens Programme can still look back on some landmark achievements across the six legs. 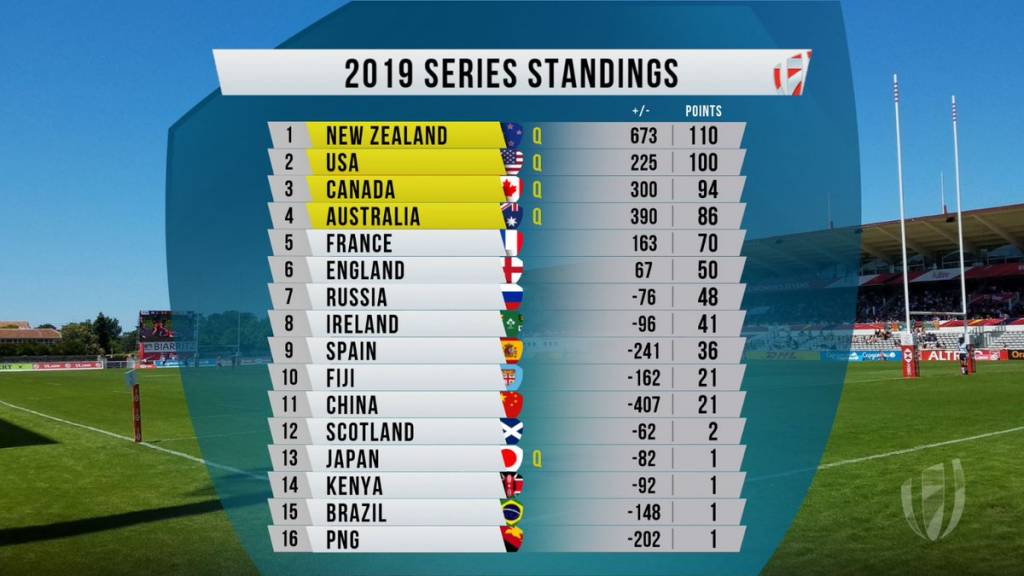 Ireland ended the series in eighth position for their highest ever finish, and armed with a new record points haul of 41. It is a jump of two places from last year and owes much to the historic Cup semi-final appearance and fourth-place finish in Sydney. They reached four quarter-finals in all, also notably finishing sixth in Glendale. 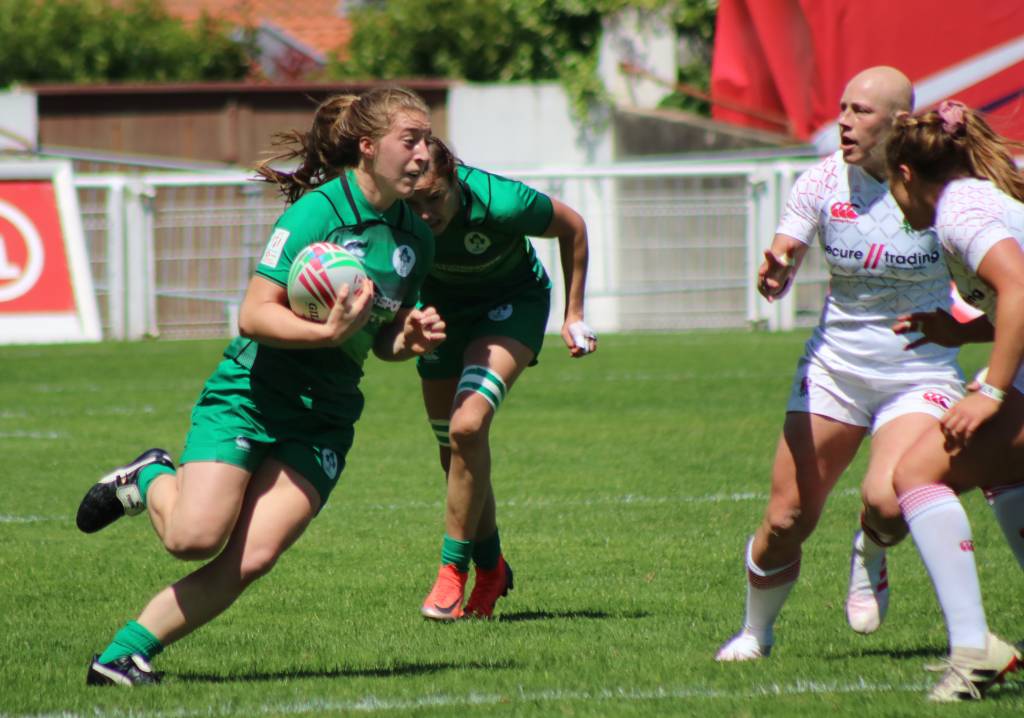 Burns, Claire Boles and Kathy Baker were brought into the starting line-up for Ireland’s opening game on day two in Biarritz – a Challenge Trophy semi-final against England – but they were playing catch-up early on after Deborah Fleming used a strong fend to notch a second-minute converted try.

Eve Higgins’ clever footwork unlocked the English defence for the ideal response from Ireland, who closed the gap to 7-5 on the back of strong runs by Boles and Burns. However, England replacements Abi Burton and Beth Wilcock restored the seven-point difference late on, the former with a turnover penalty and the latter with a pacy finish in the right corner.

Ireland conceded a soft third try early on the resumption, Hannah Tyrrell’s missed tackle allowing Heather Fisher to break clear from 40 metres out. That brought the best out of the girls in green’s attack, Tyrrell jinking into the 22 before good footwork again from Higgins and Hogan paved the way for Boles to crash over in the right corner.

Higgins nailed a terrific conversion to reduce the arrears to 19-12, only for Celia Quansah to steal away down the short side of a ruck and put England into a double-scores lead. The sides were split by seven points in the end (24-17), a last-gasp surge from Ireland seeing Flood and Higgins committing defenders and sending Murphy Crowe clear for her third try of the weekend. 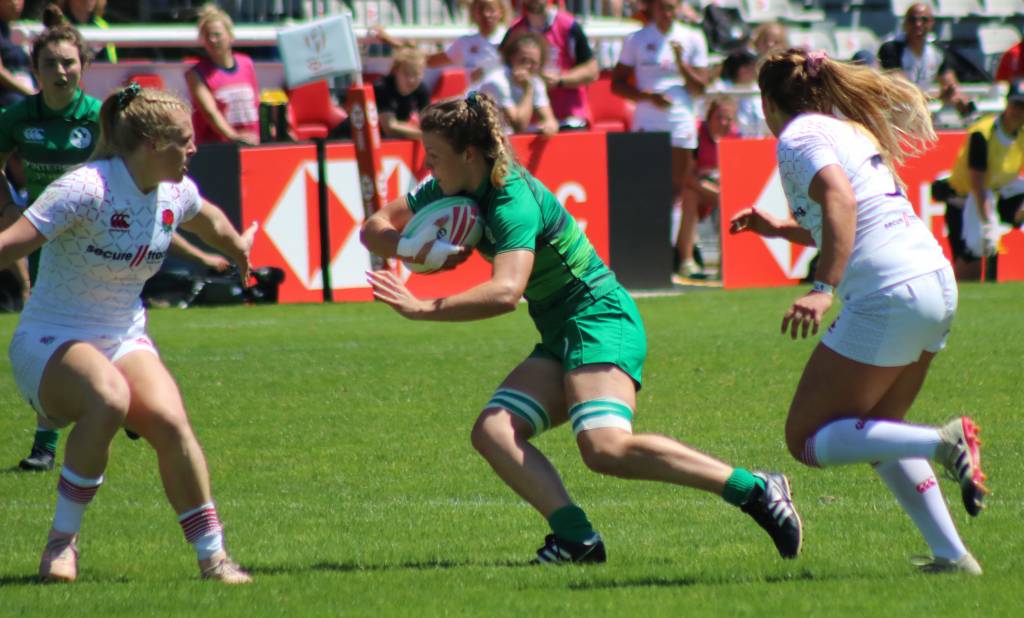 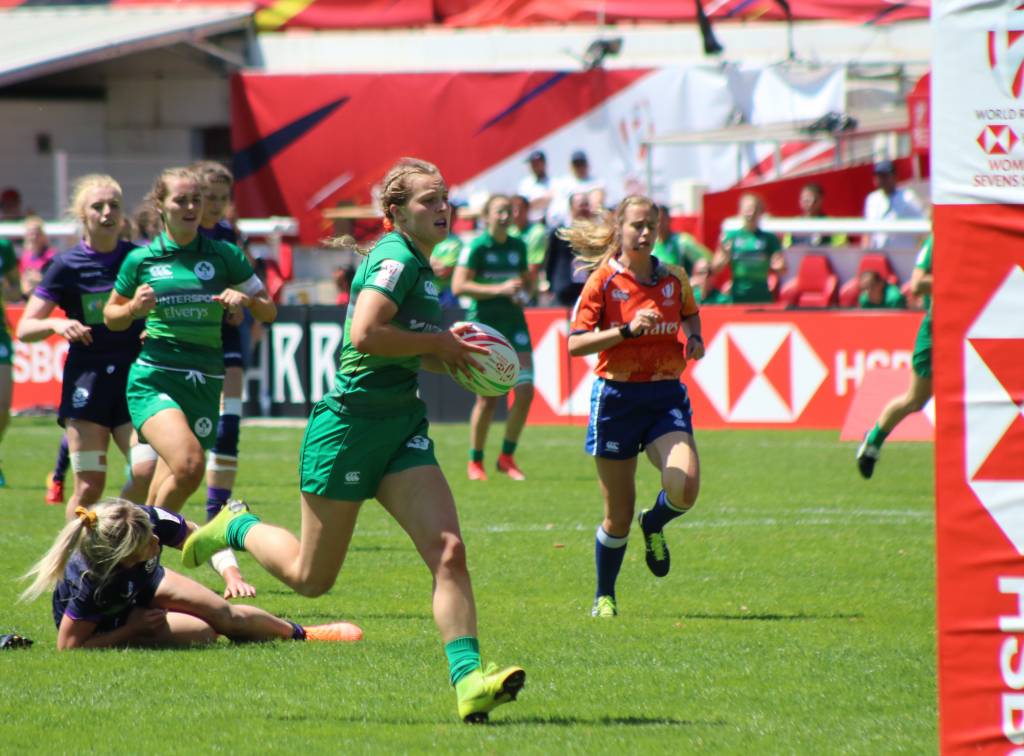 In the 11th-12th place play-off, a gaping hole opened up at the side a ruck and Scotland’s Megan Gaffney scampered through it to give her side an early seven-point buffer. Some incisive running got the Irish attack firing, and Deirbhile Nic a Bhaird’s break and timely pass put the supporting Burns in under the posts, with five minutes gone.

Despite the Scots having Annabel Sergeant sin-binned for taking out Louise Galvin in the air, they moved back in front past the half-time hooter with a well-worked breakaway try from Lisa Thomson. 12-7 became 19-7 in the 11th minute when Ireland were left to rue a lost lineout as the ball was moved across to Rhona Lloyd who left Murphy Crowe in her wake for try number three.

Scotland captain Helen Nelson followed up on good work by Lloyd and Hannah Smith to snipe over from a close-in ruck, and Murphy Crowe did likewise – but from just outside the Irish 10-metre line – to run in a late consolation score, converted by Tyrrell, which proved all-important in her personal battle with Farella. 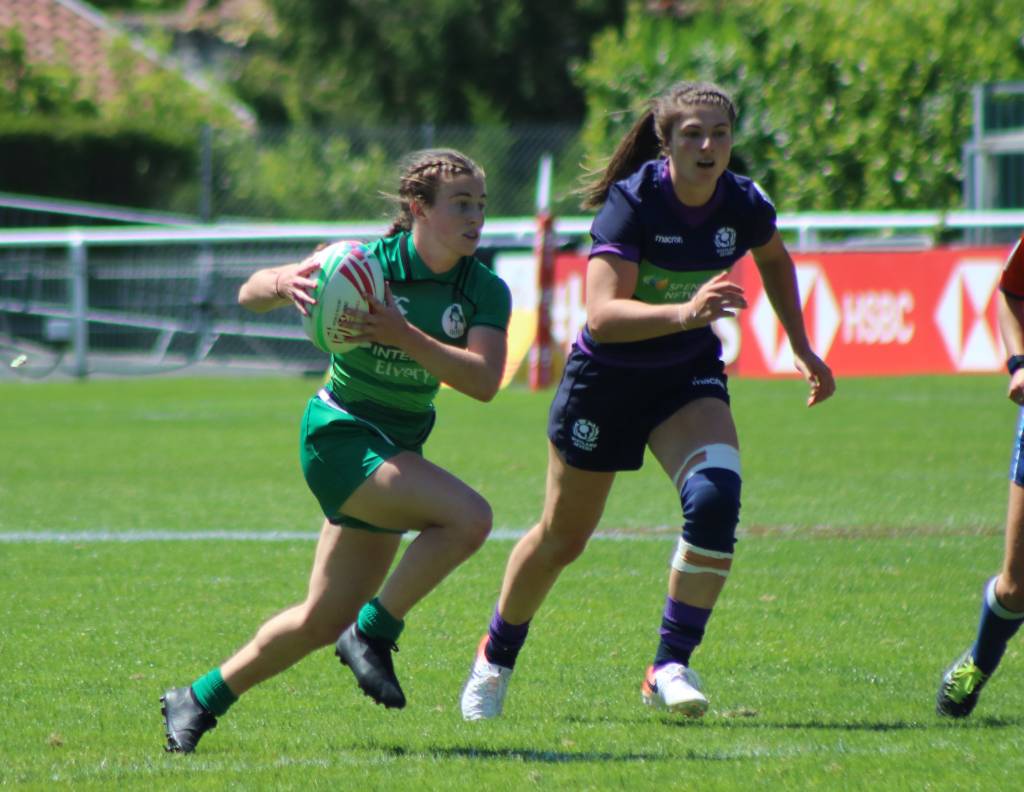 The next tournament for the Ireland Women is the first leg of the Rugby Europe Women’s Sevens Grand Prix Series, which takes place in Marcoussis, France on June 29-30. That is followed by the Rugby Europe Olympic qualifying tournament on July 13-14 in Kazan, Russia, where the winners will secure a place at the Tokyo 2020 Olympics.

The final tournament of the season is the second leg of the Sevens Grand Prix Series which is in Kharkiv in the Ukraine on July 20-21.