Sixteen players made their Rugby World Cup debuts for Ireland in the 27-3 bonus point win over Scotland, starting as they mean to go on as the team pocketed five well-earned points in the Yokohama rain.

Joe Schmidt’s men hit the ground running with three tries inside the opening 24 minutes – all scored by forwards from close range – and Andrew Conway, who was making only his tenth start at international level, stepped inside Finn Russell to seal the bonus point in the 55th minute.

Considering Ireland have only beaten Scotland by a greater margin than 24 points on three previous occasions, this was a thoroughly efficient performance and one which they will look to build on when they face Japan in next Saturday’s Pool A top of the table clash. 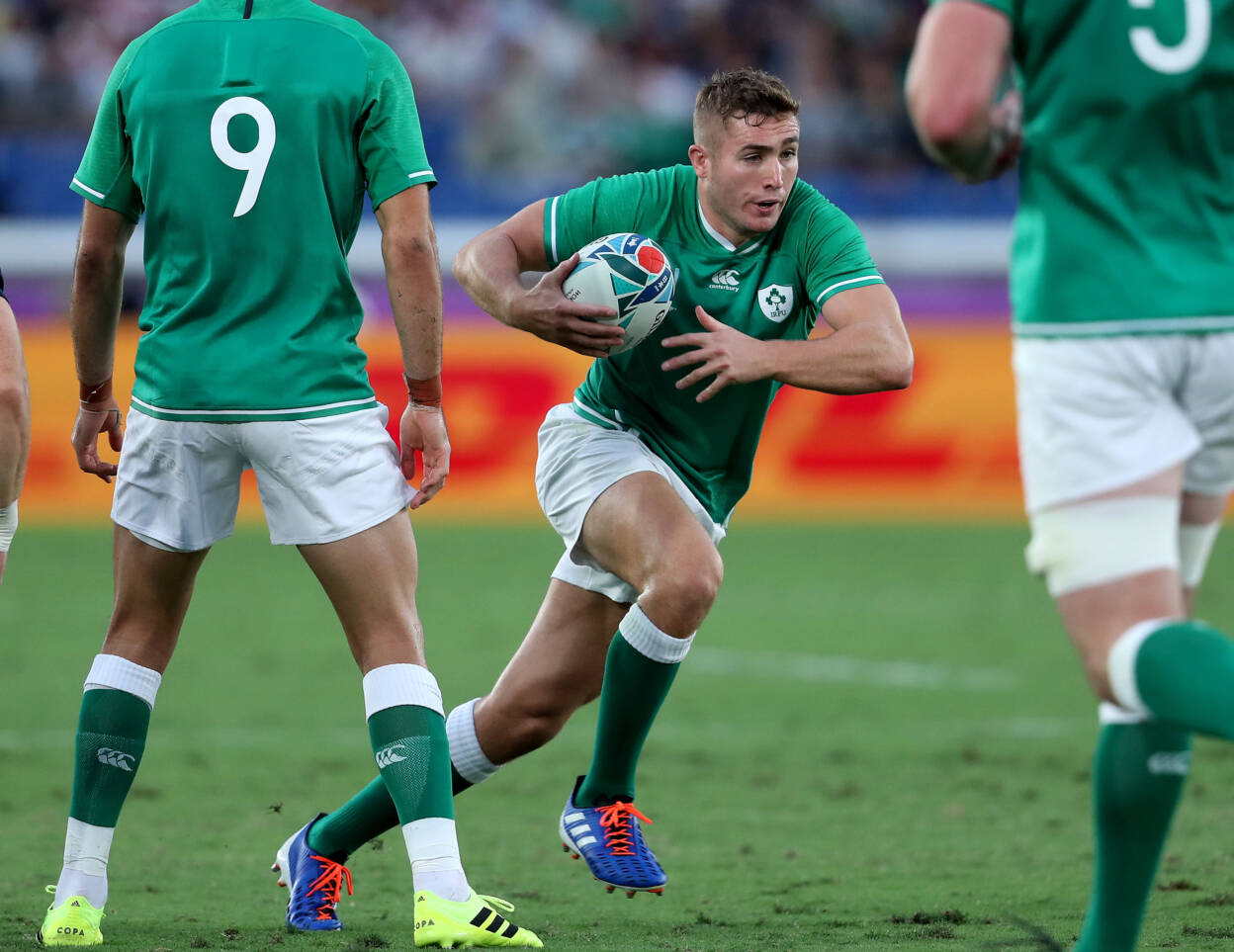 Before the squad moved on to their next base in Shizuoka, full-back Jordan Larmour reflected on the opening game, saying: “There was a good few nerves. It’s a first World Cup for a lot of the boys so there wasn’t much sleep for the boys last night. It is pretty nerve-racking lining up there for the anthems.

“The support was incredible. There was a sea of Irish (fans) there and we could hear them. (Catching early high balls) helps the confidence. It’s something we work hard on in training and in pre-season. To get our skills better. It was slippery out there too so I’m happy enough to keep building, kicking on.”

He added: “There are a lot of things to improve. We will pick the game apart (on Monday), then keep building, improving in defence, attack, our kicking. There’s a lot of competition, everyone is fighting for their spot. You have to take the opportunity with both hands and hang onto the jersey. Just play to the best of your ability.”

Although there was one dropped high ball he was unhappy with, Conway was generally pleased with his lot after marking his World Cup bow with a well-taken try in the right corner. It was the Munster flyer’s seventh score for Ireland – and all of them have come in winning displays.

“Obviously Scotland are one of the tougher teams along with Japan, and then we’ve got Russia and Samoa. Scotland was a tough game coming up first and there’s probably no love lost between the two teams, going back to provincial level,” admitted Conway.

“There’s probably not as much bite internationally, funnily enough, as say the Munster-Glasgow, and Leinster and Glasgow have a little thing as well, so you can definitely take confidence from it (the win), but you can’t take too much confidence either.

“We watched a few of the (World Cup) games over the last few days and we know what else we’re going to come across in the latter stages, but that’s a long way away at the moment. We’re looking at just recovering at the moment.” 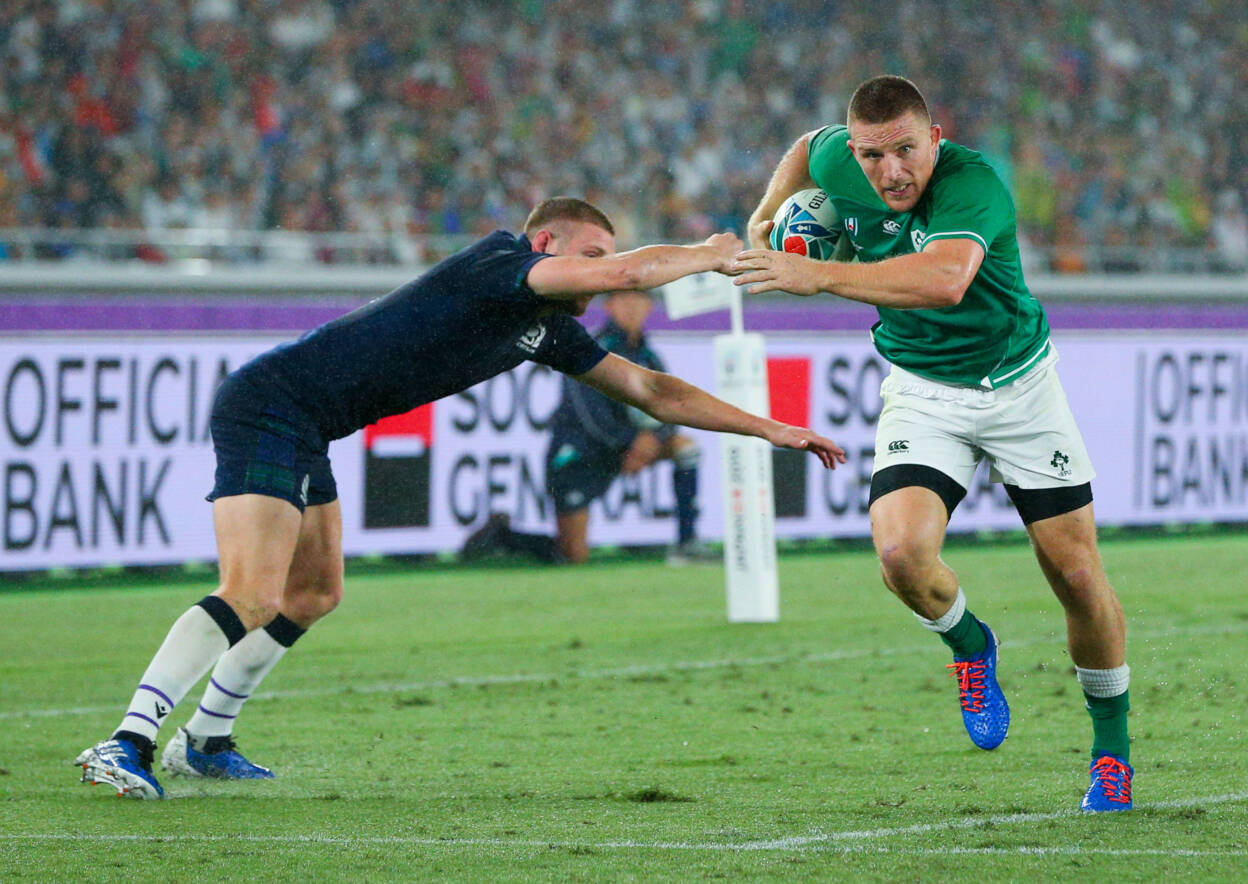 There was pressure on a back-three with an average age of 24 to deliver, especially in the absence of vastly-experienced duo Rob Kearney and Keith Earls. Conway knew that his time together on the training pitch with Larmour and Jacob Stockdale had the trio primed to lay down a marker against Scotland.

“We haven’t played as a three that much but we are all very used to each other. We’ve trained together for three years now for the most part,” he explained. “Whenever you are…not written off, but whenever there is a bit of panic media-wise when a few lads are out, it gives you a nice gesture to put up to some people who don’t think you are up to the task.

“I know there was a bit thing about the aerial (challenge), and missing Rob and stuff, I kinda like seeing that. Sometimes you’re calling for a new fella at full-back – and whenever a new fella is in, it’s ‘where’s Rob?’. It’s always the grass is always greener between the media and the public. So yeah, it’s an enjoyable one.”

Meanwhile, an unblemished lineout performance from the Irish pack was hugely pleasing for young lock James Ryan, who made it back-to-back tries with the fifth-minute opener which was very similar to his effort against Wales two weeks ago.

Commenting on the reliable set piece which delivered twelve-out-of-twelve throws, the 23-year-old said: “It was a good test for us, particularly when the rain started belting down. I was really happy with how the guys went.

“I took one ball towards the end when they shifted up towards the front and the space was in the middle and in the pouring rain, ball like a bar of soap, Besty (Rory Best) hits me at full extension. I was delighted with that. We made some good progress today.

“Traditionally, the lineout has been a real strength for us. Obviously, there were a couple of (warm-up) games in the summer when it didn’t go well for us and we weren’t where we needed to be. I think today was a good platform.” 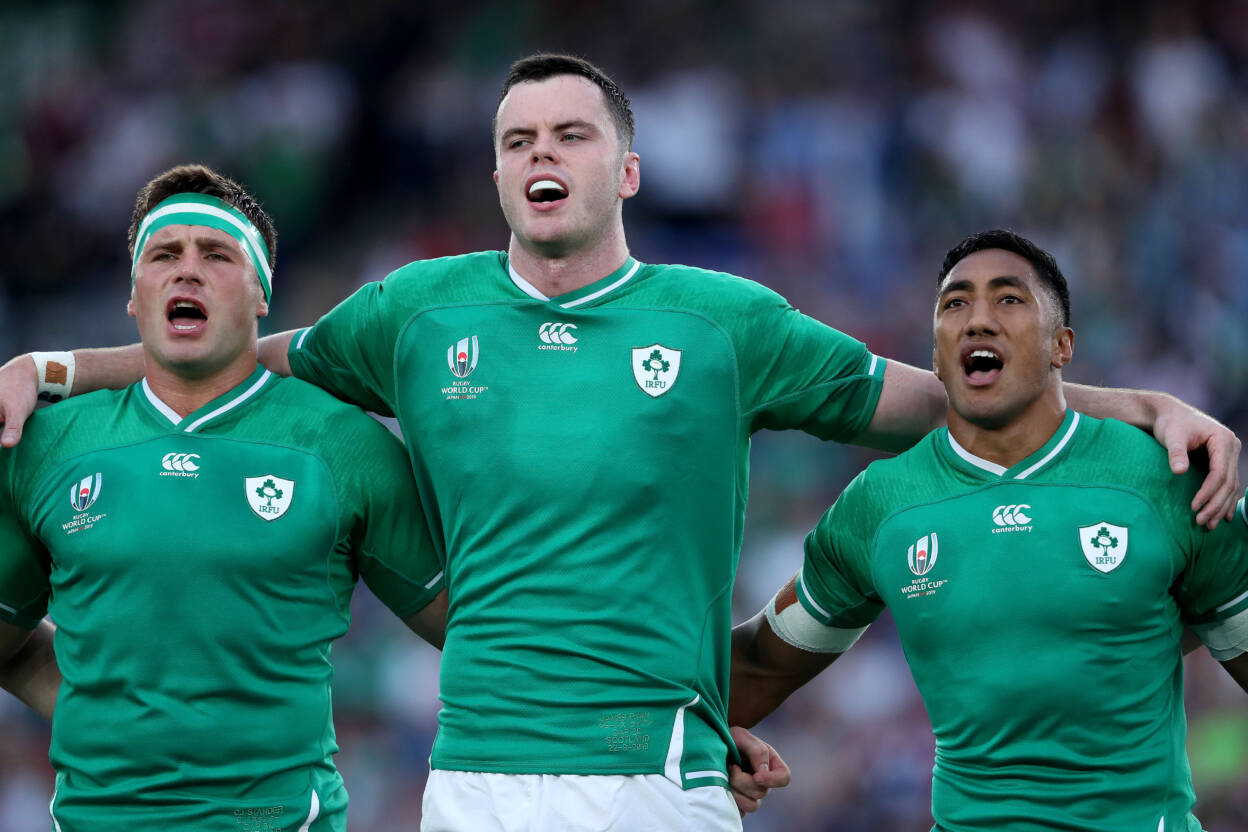 Ryan also spoke about the importance of getting your mental preparation right for such a crucial clash, adding: “I think it’s all in the top two inches at this level. I think when we’re mentally primed and ready to go for the collisions and all that comes with the game, that’s when we’re at our best. So, maybe at times we haven’t been quite ready mentally.

“The last few games that’s been the difference, that we’ve built into the week and when the games come it hasn’t taken us by surprise so we’re ready to go. It’s a good feeling, getting it off to a start like that.

“I think the support (from the fans) today was unbelievable, and even in Yokohama itself it was class. In the past we have rested on our laurels and patted ourselves on the back but the big thing is that we know that’s not going to be good enough the further we go. We’ve got to just keep building now.”