Ireland head coach Joe Schmidt was honoured by the Rugby Writers of Ireland at the annual Guinness Rugby Writers Awards held at the Guinness Storehouse, being awarded the prestigious Tom Rooney award in recognition of his immense contribution to Irish Rugby.

First appointed to the Leinster head coach role ahead of the 2010/2011 season, Schmidt has made a huge impact in the nine seasons he has been coaching in Ireland. During his tenure with the province, Leinster were crowned European champions in 2011 and 2012, adding the 2013 Challenge Cup and GUINNESS PRO12 double in his final season.

Schmidt took up the reins with Ireland in 2013, and over the course of the next six years Ireland have enjoyed their unprecedented success, claiming three Guinness Six Nations titles – including a 2018 Grand Slam. They secured their first series wins in Argentina (2014) and Australia (2018), a first victory over the Springboks on South African soil in June 2016 and a maiden triumph against the All Blacks in Chicago the following November.

Twelve months later, Schmidt’s men made further history by recording a first home victory over New Zealand at the Aviva Stadium. In November 2018 he became only the second Irish coach to be named the World Rugby Coach of the Year. 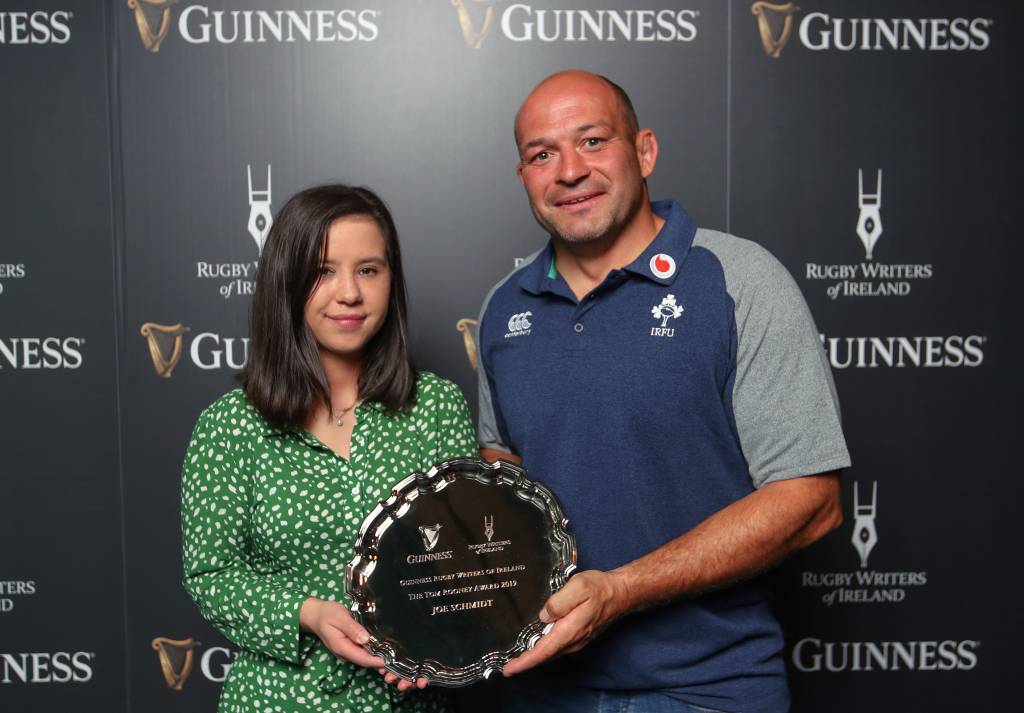 Leinster and Ireland lock James Ryan was named the Guinness Rugby Writers of Ireland Men’s Player of the Year, in recognition of another outstanding season in which he cemented his reputation as one of the best second rows in the world with a series of outstanding performances for both province and country. 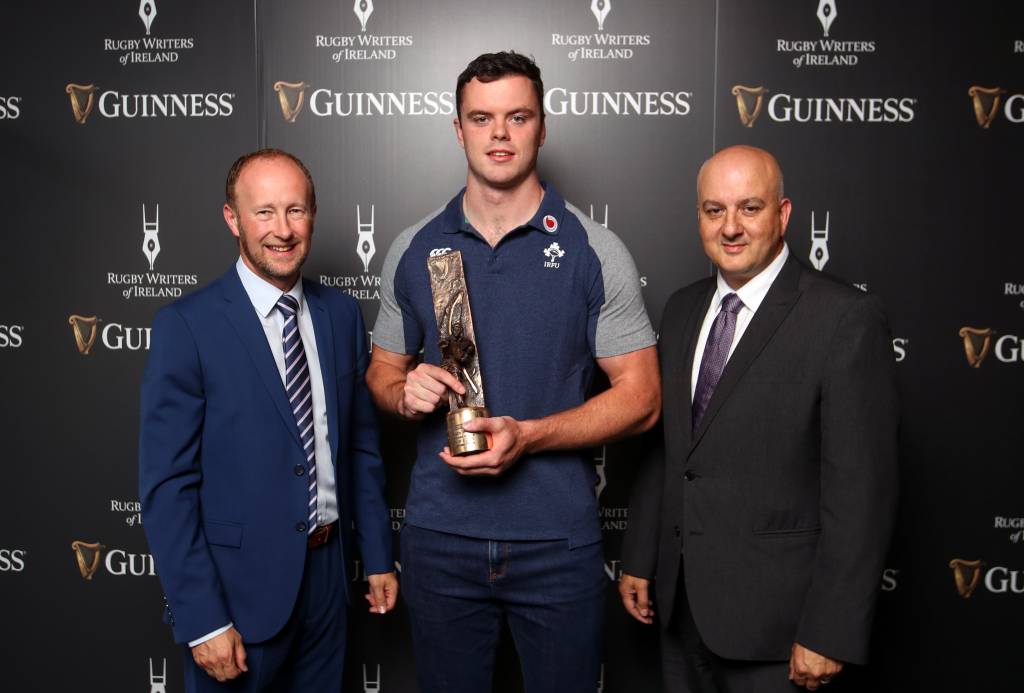 UL Bohemians, Munster and Ireland back rower Ciara Griffin was recognised as the Guinness Rugby Writers of Ireland Women’s Player of the Year. The Kerry native played in all of Ireland’s Six Nations games where her on-field performances, coupled with her leadership as captain, ensured she was the stand-out player for the Ireland Women last season.

Coached by Noel McNamara, the Ireland Under-20s were awarded the Dave Guiney Guinness Rugby Writers Team of the Year following their incredible Grand Slam in the U-20 Six Nations Championship. Receiving the award were David Hawkshaw and Charlie Ryan, who both had stints as U-20 captain this year. 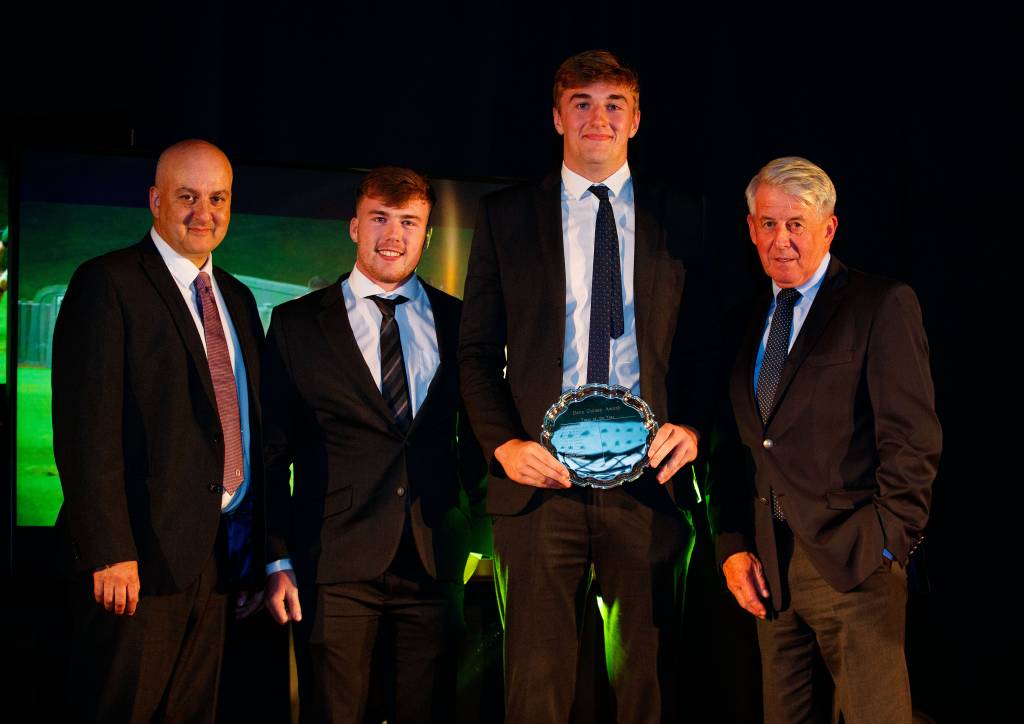 This is the first year that awards were given to Ireland’s Sevens players by the Rugby Writers of Ireland. Jordan Conroy was named the inaugural Men’s Sevens Player of the Year, while fellow speedster Amee-Leigh Murphy Crowe is the first Women’s Sevens Player of the Year.  Amee-Leigh was the top try scorer in the 2018/19 Women’s World Series and was named in the Women’s World Series Dream Team.  Jordan’s try-scoring helped secure a World Series place for the Ireland men in 2019/20. 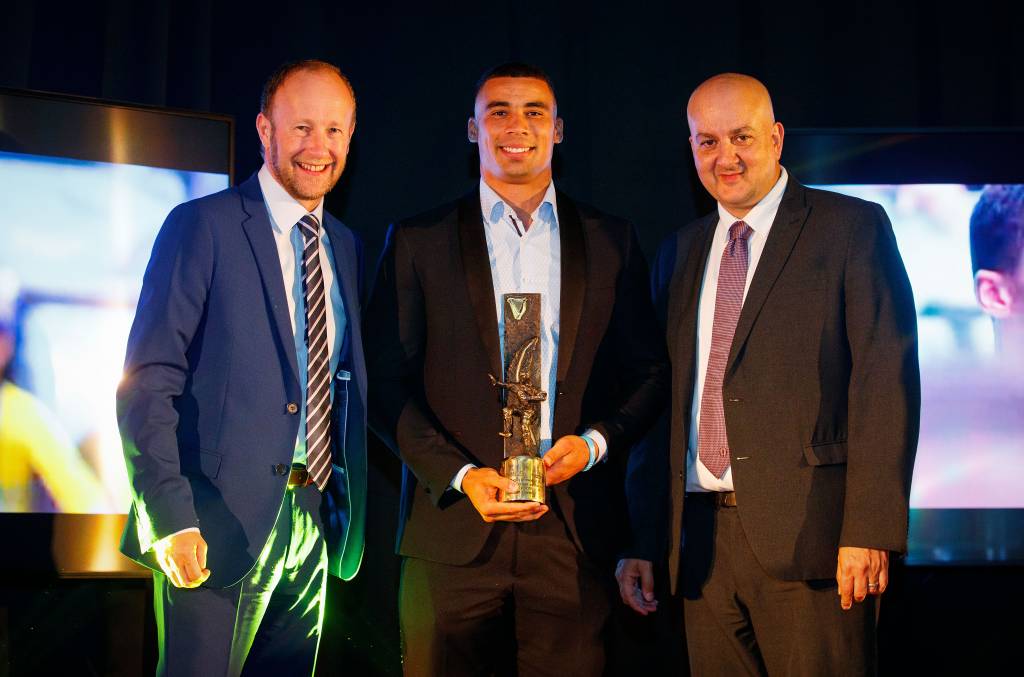 Cork Constitution, who emerged as the 2019 All-Ireland League Division 1A champions, were named the Guinness Rugby Writers Club of the Year. Cork Con enjoyed an incredible season with their senior team winning 23 of their 26 matches as they lifted the All-Ireland League trophy, the Munster Senior Cup and the Cork Charity Cup. 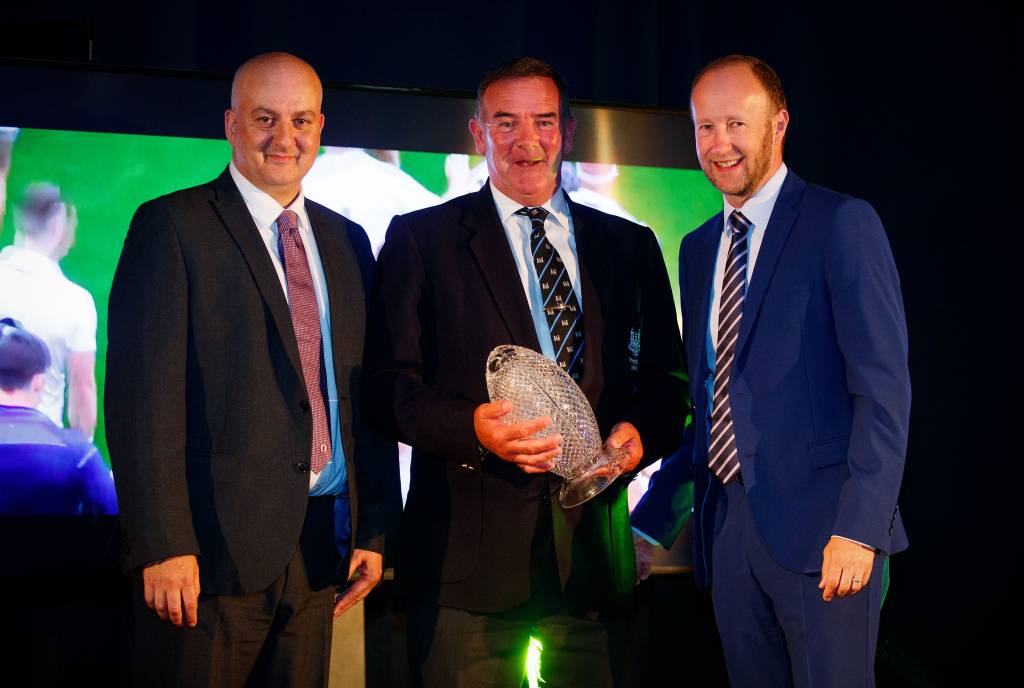 Dolphin and Munster’s Michael Kiernan was inducted into the Guinness Rugby Writers Hall of Fame. Kiernan, who played 43 times for Ireland, was a member of the Irish team that won the Triple Crown in both 1982 and 1985. Best remembered for his famous Lansdowne Road drop goal that secured victory against England to win the 1985 Triple Crown, the Corkman toured with the Lions in New Zealand in 1983 and represented Ireland at the inaugural Rugby World Cup in 1987. 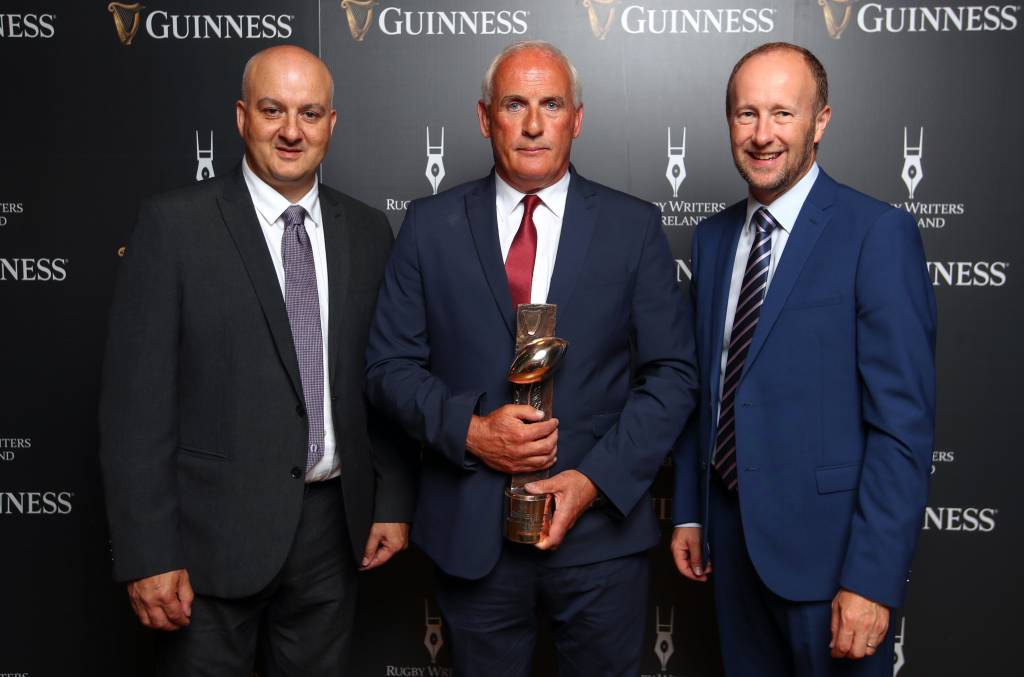 Guinness is a long-time partner and supporter of Irish Rugby at all levels of the game. Rugby is a sport that in all its formats embodies community and camaraderie both of which are of immense importance to us at Guinness.

“We are delighted to be recognising some of the greats of the game both past and present at the Guinness Rugby Writers of Ireland Awards. In particular, we are very proud to see Joe Schmidt’s immense contribution to Irish Rugby recognised with the awarding of the prestigious Tom Rooney award.

“Joe and the Irish men’s team have very challenging but exciting months ahead. We want to wish him and the team all the very best in the upcoming Guinness Summer Series and the Rugby World Cup in Japan.” 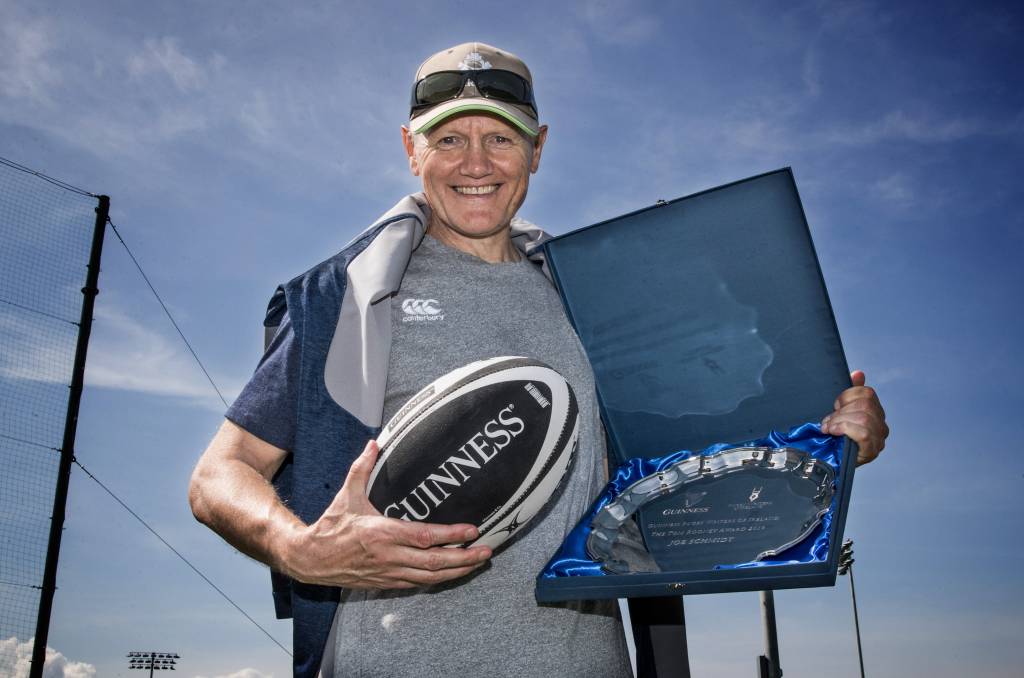 Schmidt was delighted to receive the accolade, awarded by the Irish Rugby media, and commented:

It is a real honour to receive the Guinness Rugby Writers Tom Rooney award. I have thoroughly enjoyed my time in Ireland. My family and I feel that we have been made to feel part of the community here, right from the outset.

“We are not sure where we will be or what we’ll be doing next but I’m really looking forward to the exciting challenge that lies ahead in the upcoming Guinness Series in the lead up to the Rugby World Cup in Japan.

“The management and players at both Leinster and Ireland have been incredible to work with. I accept this award on all of their behalf and will be forever grateful to all of them for the privilege of working alongside them.”