As the countdown continues to the Rugby World Cup in Japan, Ireland scrum coach Greg Feek believes the competition for places within the squad is more intense that it was for their previous campaign in 2015.

Following second row Ultan Dillane’s return to Connacht at the beginning of this week, 23 forwards remain at the team’s current base in Carton House. This includes 11 front row players, with representatives from each of the four provinces vying for a spot in the final 31-man World Cup selection.

While Feek and his fellow coaches are taking a measured approach in the selection process, the former New Zealand international admits they will have to make a number of tough decisions in the next few weeks as Ireland tackle Italy, England and Wales in warm-up clashes.

“I think there’s experience there,” he explained. “A lot of the guys have had bloody noses. They’ve had some good days and they’ve had some bad days. That’s important for a World Cup as well. The bloody noses are the ones you know you’ve got to get right in terms of your own role and the team’s role. They’ve banked a bit of that and now we’ve just got to make sure we build ourselves.

“We’re not flipping tables and things like that. It’s good, robust conversation. Sometimes it’s a little bit of, ‘we have to wait and see’. These guys have to front up to see where they’re at. There might be some close calls. That’s the exciting thing for me, but my job, and (that of) all the other coaches, is to give the players the best opportunity as well.

“Hopefully we get our messages right, we give the right processes and stuff as well. We’re all looking at each other in terms of that. I do feel there’s some really good competition. You look at it and you’ve got guys who can cover both sides (of the scrum). You’ve got looseheads playing well, you’ve got tightheads playing well and you’ve hookers all vying for a spot. Second row is no different.” 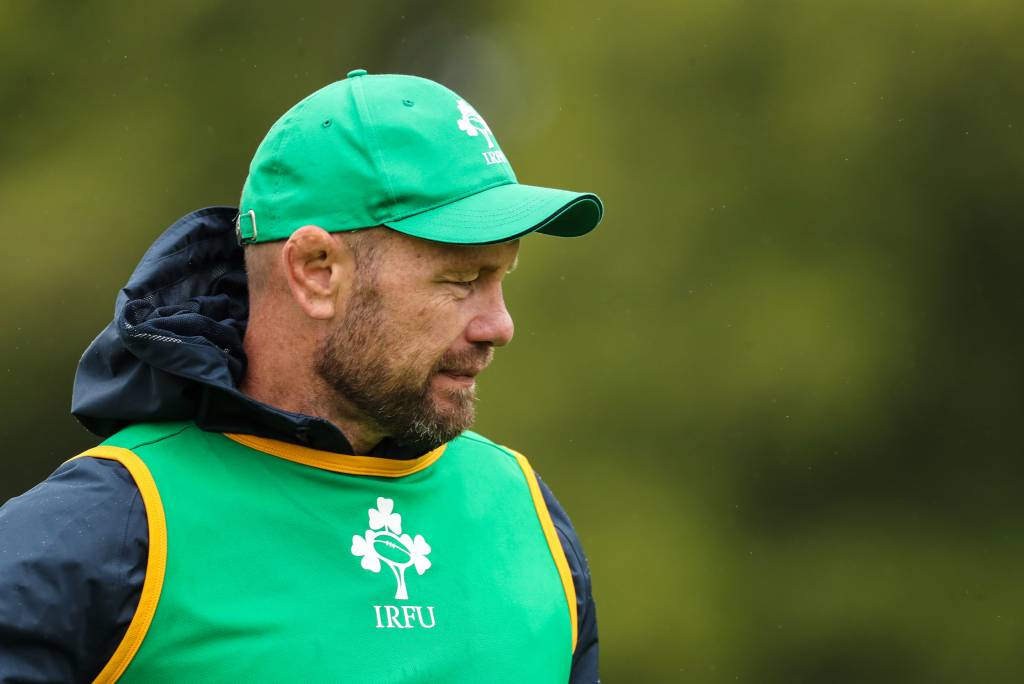 Two men who will be pushing hard for selection in the forthcoming warm-up matches – starting with this Saturday’s Test against Italy at the Aviva Stadium (click here to buy tickets) – are Munster forwards Jean Kleyn and Tommy O’Donnell.

Kleyn and another of his provincial colleagues, Mike Haley, are the two uncapped players in an Ireland squad that currently numbers 43. Tipperary native O’Donnell has 12 international caps to his name but has not featured in green since the final round of the 2016 Six Nations Championship.

He missed out on a place at the World Cup four years ago owing to a dislocated hip and last tasted competitive action in Munster’s Heineken Champions Cup clash with Exeter Chiefs back in January. Like most players in the Ireland camp, O’Donnell and Kleyn will have a fight on their hands for a seat on the plane to Japan.

Feek is delighted to have them on board for the moment, though, and feels they can add plenty to Ireland’s forward play, noting: “Jean Kleyn brings a little bit of a different element. He’s obviously a big man. He’s played for Munster on the tighthead side of the scrum and enjoys the physical part of the game.

“Like anyone new who comes in, it’s making sure that he understands the way we play the game. The intensity of that and getting his detail right. Which is obviously one part of it, but not forgetting the strength of what he brings and making sure that comes first as well.

“Tommy, as an athlete, he’s got some X-factor. He also brings that bit of enthusiasm. He asks a lot of good questions. It has been refreshing having him in because it was an injury that took him quite a long time to get right and it’s almost like he’s timed it right in terms of that. Really, it’s up to him now. I can’t speak highly enough, obviously, of what he’s been through to get to this point. Training, in the gym and things like that. It has been great.”

Like all of their warm-up games en route to their tournament opener against Scotland, Saturday’s fixture is against one of Ireland’s familiar foes. When Joe Schmidt’s men faced Italy at the Stadio Olimpico in Rome during this year’s Six Nations, they were forced to dig deep before securing a hard-fought 26-16 success.

As he looks back to Ireland’s efforts in the spring, Feek feels the team will ultimately be judged on how they fare in the World Cup rather than their unsuccessful Six Nations title defence.

“Continuity was an issue in some ways, but it was great in other ways,” he insisted. “There was the odd niggle or a bit of change in personnel and that, I suppose, is a risk at times. Even if you look at the (Rugby) Championship at the moment, you see how the All Blacks are selecting.

“You see how all the teams are selecting their teams. They’re trying to win games, they’re trying to get performances, but they’re also trying to give opportunity. That’s just the way it rolls. For me, hopefully the World Cup will be more of a reflection on how things go this year than everything else.”

Since May of last year, Feek has combined his Ireland duties with an assistant coach role at Japanese Top League club NEC Green Rockets. It has also given him a chance to keep a close eye on the progress of the Japanese national team under fellow Kiwi Jamie Joseph.

With Ireland facing the World Cup hosts in their second pool match, he added: “Japan have got a lot of guys that have come in through eligibility. They’ve been training during the whole Super Rugby. On and off. Trialling different combinations. I don’t know if you’ve seen the footwork of some of the outside backs and that’s Japan rugby. There’s a lot of teams that have footwork like that.

“It’s really hard for some of them to defend at times, the half-backs like to have a crack as well. They’re quite quick off the ground with the pass. You can see the style of play is having as many numbers on feet as you can. Like numbers in rucks and speed of ball. They’ve played that game, but now they’ve brought in a few for their set-piece attack. There’s some exciting things for them.”