The Ireland Women’s Sevens team’s hopes of reaching the 2020 Olympics were ended by England, the eventual winners of a fiercely-competitive Olympic qualifier in Kazan where Stan McDowell’s side bowed out at the quarter-final stage.

Ireland played two fellow World Series teams in the Russian city and lost both games, a heartbreaking 17-7 quarter-final loss to England knocking them out of contention for Tokyo. They were fifth-place finishers following well-executed wins over Romania (48-0) and Poland (33-5), the latter game seeing Amee-Leigh Murphy Crowe take her weekend’s haul to eight tries.

This is a young and ever-developing Irish squad – 11 of the 13 travelling players are aged between 19 and 25 – and they will be determined to end the season with an improved overall performance at next week’s final Rugby Europe Sevens Grand Prix Series leg in Kharkiv, Ukraine.

The last twelve months has seen them secure best-ever finishes of sixth at the Rugby World Rugby Sevens and eighth in the World Series, including a historic semi-final appearance in Sydney.

Their rise should continue given the squad’s increasing levels of experience and the IRFU Sevens Programme’s recent move to the new High Performance training facility at the Sport Ireland Campus in Abbotstown.

Ireland lost their grip on a seven-point first half lead against old rivals England, their early progress including Hannah Tyrrell’s fourth-minute try which saw her step inside Deborah Fleming following ground-gaining runs in the 22 by both Kathy Baker and scrum half Stacey Flood.

However, a decoy runner opened up space for Holly Aitchison to charge down the right touchline and ground the ball despite Louise Galvin’s last-ditch tackle. Ireland were still 7-5 to the good until Fleming edged her side in front, her try coming in somewhat controversial circumstances as there appeared to be a knock-on by England in the previous phase.

The lack of a whistle from Scottish referee Hollie Davidson drew boos from some of the local supporters, but England did manage to squeeze Ireland for territory in the second period and emerge as worthy winners of a very hard-fought clash. Alex Matthews confirmed it with a last-minute try courtesy of a strong hand-off.

Tyrrell and Audrey O’Flynn scored two tries each – and Eve Higgins tallied up 13 points – as Ireland bounced against Romania in their 5th-8th place play-off. They led 17-0 at half-time, the lively Megan Burns and Tyrrell both raiding over from the right wing before Deirbhile Nic a Bhaird muscled her way through midfield on the stroke of half-time.

Young replacement Baker evaded a couple of defenders to quickly add to the try tally, before O’Flynn reached over in the left corner, swatting away two defenders in the process. Higgins landed a peach of a conversion, and the closing stages produced more tries for Tyrrell, O’Flynn and Higgins, who broke through with a clever dummy.

Despite temporarily losing a bloodied O’Flynn to an early injury, Ireland gradually ground a well-drilled Poland side into submission. The Poles had the better of the first half, their captain Karolina Jaszczyszyn finishing smartly but Tyrrell deftly swooped on a grounded pass and spun to release Murphy Crowe for an inspiring late score and a 7-5 interval lead.

Strong-running skipper Mulhall made the initial break to set up the trailing Murphy Crowe to dart clear again and provide some breathing space. Ireland were dominant thereafter, Higgins and Murphy Crowe both beating defenders on the outside to settle the issue before Burns came off the bench to make it a five-try triumph.

Seven Women’s teams have now confirmed their place at Tokyo 2020 in hosts Japan, South American champions Brazil, Great Britain (courtesy of England’s efforts in Kazan) and the four teams who advanced courtesy of a top-four finish in the World Series – New Zealand, the USA, Canada and Australia.

Russia, who lost 19-0 to England in the Kazan final, and France, who overcame Spain 17-5 to claim third spot, will represent Europe in the World Rugby Repechage next summer – the event which will produce the last qualifying team for the Olympics. Colombia, Argentina, Mexico and Jamaica will also compete in the Repechage. 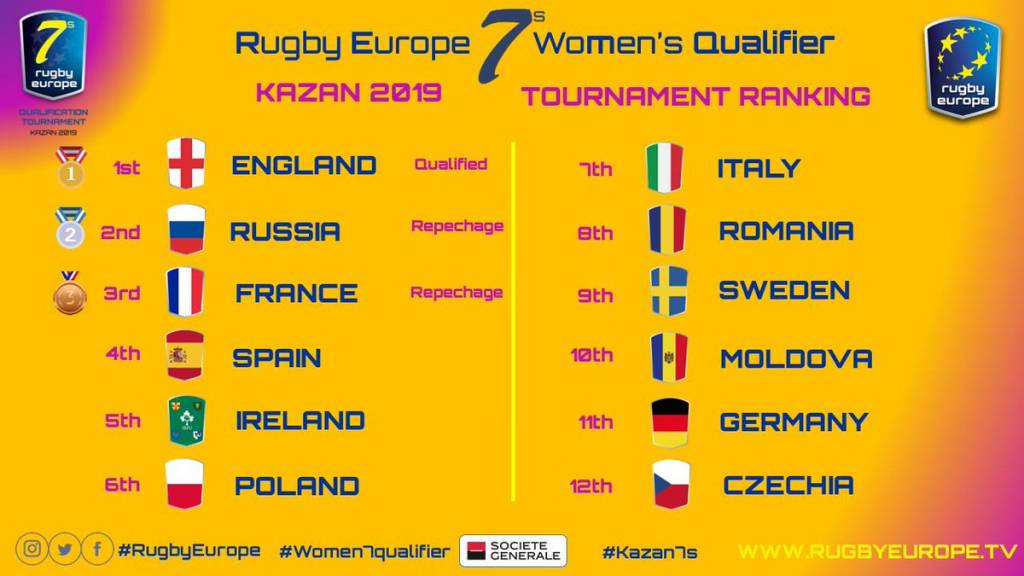