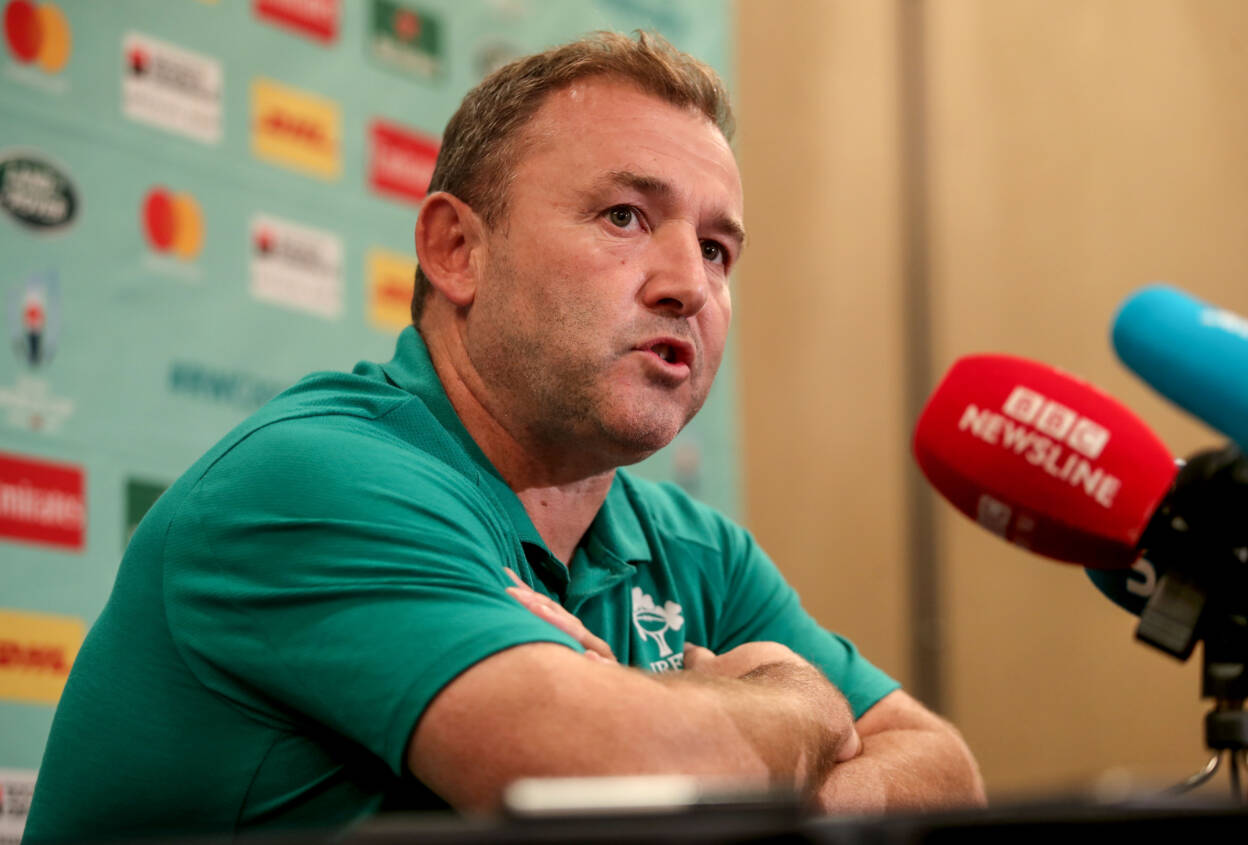 Richie Murphy gave an update on the Ireland squad after training at their new base in Shizuoka. The players were back on the pitch and in the gym and there was plenty to discuss in the build-up to Saturday’s Rugby World Cup clash with Japan.

Talking through the camp’s latest injury news, the Ireland skills and kicking coach said: “Pete (O’Mahony) and Bundee (Aki) have come through well. They have both passed HIA 3 (head injury assessment) which means they’re fit to return to training, which they’ve done today.

“Obviously we’ve moved base and we’ve moved into Kagawa, which has been incredible. The lads have settled in well, rest and recuperation has probably been the main focus over the last 48 hours since the game. So guys are feeling good.

“Robbie (Henshaw) was in training today. He’s done a lot of running today, came through that no problem. We’re going to keep an eye on him this week to see what he’s like on Thursday and make a decision on him then.

“Johnny (Sexton) also went through some rehab today. He got a knock on his quad against Scotland. He has done some work with the team but has been sort of monitored. We’ll expect (him) to train fully on Thursday and that wouldn’t be unusual for him not to train two days after a Test match.

“Joey (Carbery) is fine. Earlsy (Keith Earls) trained fully today. Rob Kearney trained fully. Those three guys from last week have made really good progress. Even by the end of last week, they were ready to play. We didn’t feel like it was the right thing to put them in with the fact that we had other players in the 31-man squad that we were happy with and knew that could do a job for us.”

The Ireland coaches are preparing the players for a stiff test from Japan, with Murphy admitting that the camp moved on swiftly from the Scotland game given the six-day turnaround and their eagerness to build on the momentum provided by the 27-3 bonus point victory.

“There were definitely areas of our game we weren’t happy with,” insisted the prolific former Greystones, Clontarf and Old Belvedere out-half. “We’ll address them internally and we’ll try and build that for Japan because we see this as another step up.

“Japan in Japan is a very difficult game. They want to play fast and loose, that’s what we expect, but they’ll be very well-organised in that. It will be up to us to try and implement our game-plan on top of them.