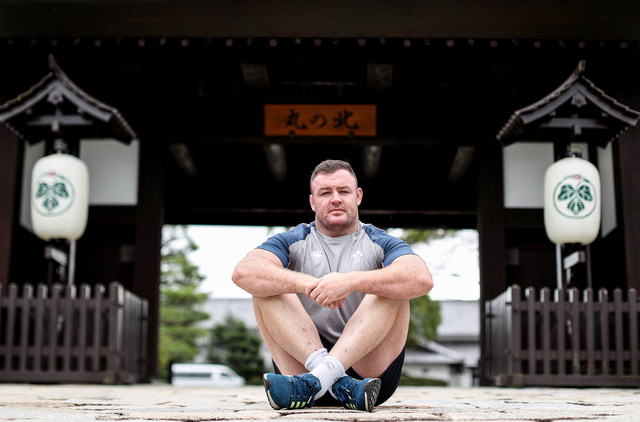 Ireland’s Chris Farrell and David Kilcoyne have both spoken of their pride at making their Rugby World Cup debuts during last Sunday’s 27-3 bonus point win over Scotland.

The pair were sprung from the bench as Joe Schmidt’s men overcame the Scottish challenge in impressive fashion. Farrell got a lot more game-time than anticipated at inside centre, as a permanent replacement for Bundee Aki who came off for a head injury assessment in the 20th minute.

“I didn’t expect to get on so early,” he said, reflecting on his World Cup bow. “When you’re on the bench you think, ‘it’ll be the second half before I get a chance to have an impact in the game’. Obviously it was unfortunate for Bundee – he picked up a knock and had to go off.

“It was unbelievable, the amount of support we had there. To see Japanese nationals with the green colour on during our game against Scotland is outstanding and the noise they made for us during the game – and after the game when we went to thank them in the middle of the pitch – was exciting.”

The big Munster midfielder added: “For us, it’s massively exciting this weekend because we’re going to play the home nation. Their support is going to be massive (in Shizuoka), the energy they will feed off from the crowd is going to be huge.

“But hopefully we can feed off that as well. It’s going to be an unbelievable event for us and them. We feel like this is just another step. We had a good start last Sunday but it was just a start and we’ve got a long way to go.”

Kilcoyne echoed those thoughts, noting some of the key the Brave Blossoms have both up front and out wide:

We were very impressed with their performance against Russia. We’ve actually toured here two years ago and played against them, so we know exactly the threats they have.

“I thought they were phenomenal against Russia. You look at some of their finishers – (Lomano) Lemeki, (Kotaro) Matsushima on the wing, Shota Horie at hooker. They have Michael Leitch – he has captained the Waratahs before and he’s over here now doing an incredible job for Japan.

“So they have threats right across the park. They play a very quick game, so we’re going to have to deal with that tempo. They probably don’t kick as much as many teams. We’re expecting very hot weather. So it’s going to be tough for us.”

With Cian Healy acknowledging that the in-form Munster loosehead is ‘playing some serious rugby’ at the moment, the competition for places is something that Kilcoyne and the front row union are clearly relishing.

“That’s a great compliment from Cian. I thought he played excellent at the weekend. That competition right throughout the squad pushes everyone and that’s what the squad needs if we are to keep progressing in this competition. The more lads you have champing at the bit and giving coaches headaches, the better for Irish Rugby.”