As he aims to represent Ireland for the second time at a Rugby World Cup, Jordi Murphy admits that the past twelve months have seen him become more ’emotionally mature’ as a player.

Having come through Leinster’s famed Academy system, the former Blackrock Colege protege established himself as a squad regular under a host of coaches at his home province – including current Ireland supremo Joe Schmidt.

However, following Leinster’s double success in winning both the GUINNESS PRO14 and Heineken Champions Cup in 2018, Murphy began a new chapter in his career under Dan McFarland at Ulster. He has enjoyed an impressive debut season in Belfast, combining to great effect with Marcell Coetzee, Nick Timoney and Sean Reidy in the loose forwards.

This has put the 28-year-old on the cusp of making Schmidt’s final squad of 31 for the World Cup, and a run-out against Italy at the Aviva Stadium tomorrow afternoon (kick-off 2pm) can further boost his hopes of featuring in Japan in the coming weeks.

“Maybe a bit more emotionally mature this summer,” admitted Murphy, speaking at the team base in Carton House. “I think I looked after myself a bit better, knowing that it was a really big opportunity obviously. I was lucky enough to go to the last World Cup. To be in a position now to, fingers crossed, be able to go to a second would be incredible.

“Just looking after myself a bit better off the pitch and just focusing the mind to what was going to be a big pre-season. To go through a season like last year, Ulster as a squad probably surpassed expectations for a lot of people. Not really ourselves, we always knew we had that bit in us. Ultimately we came short in both competitions we played, but there was a lot of positives.

“If I was able to add to that at all, that’s obviously a good thing for me. Hopefully that’ll stand to me now in the next few weeks. Just being able to bring a bit of freshness in after a good couple of weeks off, and injury-free, is a positive for me.”

While Schmidt had some tough decisions to make when Murphy was first selected for a World Cup squad in 2015, the competition for places is even more ferocious four years later. With the obvious exceptions of Jean Kleyn and Mike Haley, who will make their international bows on Saturday, the rest of the players in camp have featured multiple times for Ireland during Schmidt’s tenure.

Despite the rivalries that may exist on both an individual and collective level and the ongoing battle for World Cup places, Murphy said the mood within the group remains jovial at all times.

“It’s definitely very competitive,” he explained. “As soon as the pitch is done and the weights are done, everyone gets on incredibly well. It’s hard not to. There’s been close to 45 guys here on a weekly basis and if you’re not getting on, it’s kinda hard to be around people. People make that bit of an extra effort and you don’t stick with guys just in your own province as well.

“You could be caught having coffee with every other province and things like that. It’s great. People make a really big effort. That’s the nature of rugby as well. If you’re not going to make an effort and if you’re not great to be around, people start to move away from you pretty quickly. It’s been a really good environment in here so far.”

The past few days have given Murphy and his Ireland team-mates a taste of what it will be like when Andy Farrell takes over as head coach of Ireland. In the absence of Schmidt this week, Farrell has been guiding the team through their preparations for the visit of Six Nations rivals Italy to Dublin.

The Wigan man took on similar duties when they defeated the Azzurri 54-7 at Soldier Field in Chicago last November, meaning the concept of him being in charge is not necessarily alien to the players. 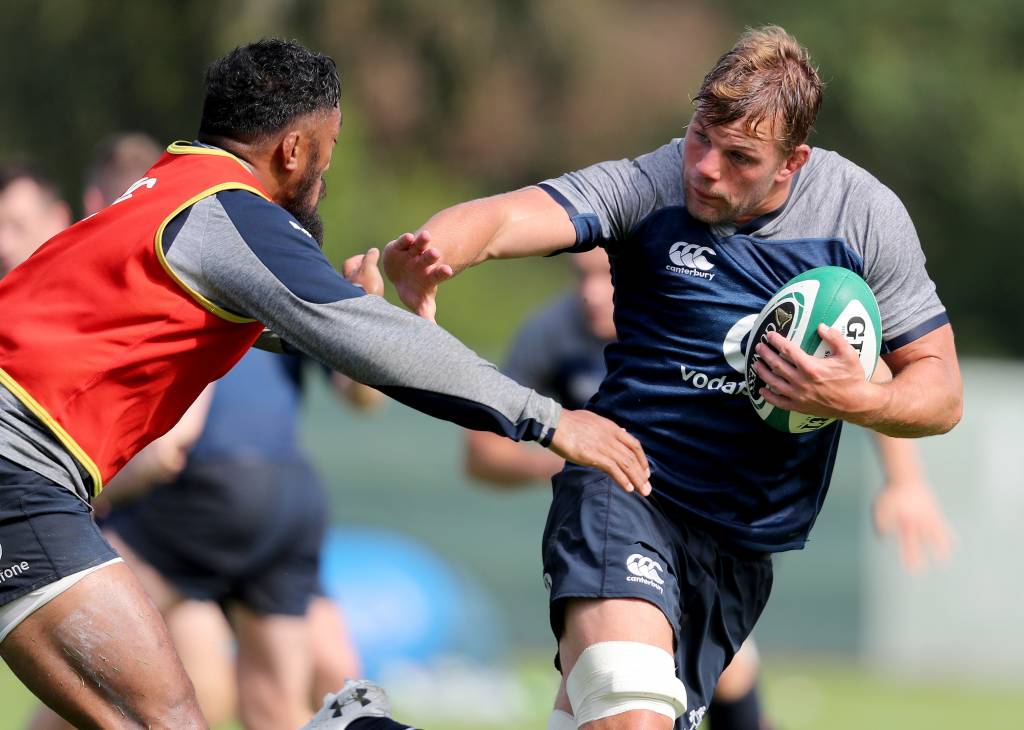 Nonetheless, Murphy believes Schmidt’s influence will be writ large across Ireland’s performance in their opening game of the GUINNESS Summer Series. He continued: “Faz got some opportunities obviously this week and when we played Italy in Chicago last time. He’s got that big presence about him. He’s obviously a big man, but also he’s got a big presence around the place about him.

“He has coached some pretty big teams in the past. It’ll be like a duck to water, it’ll be an easy transition for him. We’ve got a glimpse of it in the last few days. It’ll be interesting to see what it’s like in the future. This week he (Schmidt) hasn’t been here and we haven’t exactly gone back to the drawing board and tried to re-create everything again.

“It has been a pretty smooth transition. The coaches know exactly what Joe wants and I’m sure they’ve been in constant contact. We’ve just tried to move from there. We’ve had a pretty similar week than we usually would any other time.

“He’s our head coach and we know Joe. He’s probably been thinking about this game for the last year. He’s probably had plans in place for a long time. I don’t think there’ll be a huge change to what we’re looking to achieve.”