The absence of Rob Kearney and Keith Earls, who were both unable to train fully this week, took 170 caps out of Ireland’s back-three ranks, but Larmour and Conway proved more than able deputies with the latter crossing for the bonus point score near the hour mark.

Combining with Jacob Stockdale, they also contributed to Ireland holding the Scots try-less, and Schmidt always had confidence that they could curb the threats posed by their opposite numbers, including Stuart Hogg, the two-time Six Nations Player of the Year. 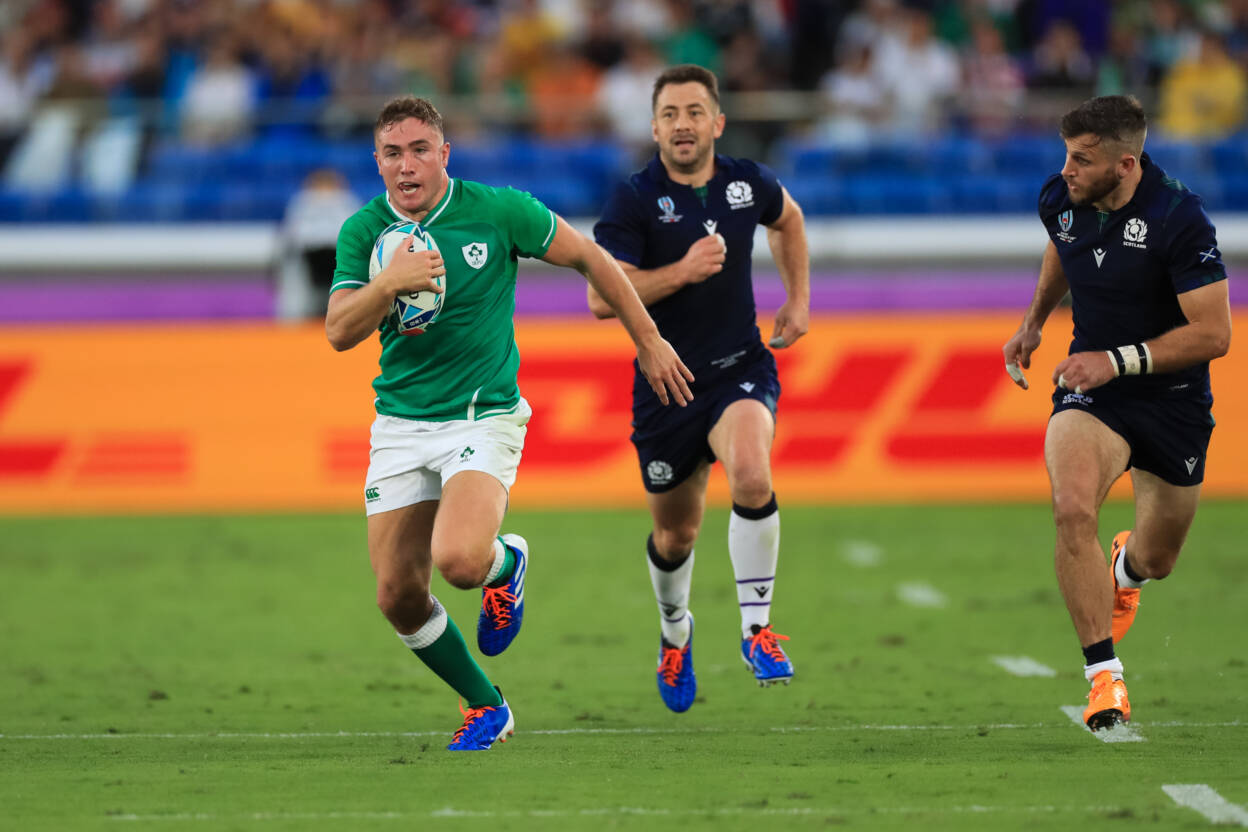 “We hadn’t made any decisions earlier in the week so they (Jordan and Andrew) were first-choice selections – and they played like that,” admitted Schmidt whose side are top of Pool A ahead of next Saturday’s clash with tournament hosts Japan in Shizuoka.

“I thought Jordan’s energy, Andrew Conway’s energy – they made a few errors but there were very difficult conditions out there, even prior to the rain. It was a little bit of film on the ball – it was quite slippery. So it is going to be one of those challenges if the weather comes in like that.

“Andrew finished his try superbly, Jordan was very good in the air – he looked dangerous. He opened them up one time and got in behind them. We probably made 10 line-breaks and Jordan and Andrew were the recipients of a couple of those – one for Andrew to score and one for Jordan to open people up.

“He (Larmour) covered the space really well because they’re so dangerous on the edges, Scotland, and both of those guys closed those channels down really well. So did Jacob.  I thought he was extra good defensively – he got Hogg a couple of times when he was sliding wide and it just allowed us to get onto the front foot instead of them getting that space on the edge.”

Ireland’s strength-in-depth helped them to weather a tricky patch midway through the first half, as Bundee Aki and vice-captain Peter O’Mahony had to be permanently replaced after initially going off for head injury assessments. In addition, Josh van der Flier spent some time off the pitch getting patched up.

It failed to knock Schmidt’s charges off their stride as tries from James Ryan, captain Rory Best and Tadhg Furlong gave them a 19-3 half-time lead. Asked what he was happiest with about the collective performance, the New Zealander said:

Sometimes what happens is that you build a lead and then lose a bit of cohesion when guys start filtering in and out. I didn’t really detect that when that happened.

“The wet conditions made it really difficult for us to construct things but we got the only try in the second half when a lot of those replacements were on. The scrum that that we turned over, with the replacements on, was really impressive.

“But also the front foot we got off to – it just takes a bit of pressure off in the game. It means they have to chase it a little bit, they have to take a few more risks than we do. And at the same time. I was happy with the number of risks we did take.”

Schmidt also expanded on the injuries to Aki and O’Mahony and the decision to replace Jonathan Sexton and Conor Murray just ahead of the final quarter. Murray had taken over the kicking duties from his half-back partner during the first half.

“We had two HIAs – Bundee and Pete. They’re both symptom-free at the moment. It’s reassuring, but we’ve got to get through the process. They failed HIA one so they’ll go through HIA two and HIA three. That’ll determine whether or not they’ve got a concussion.

“Beyond that the minimum time you can turn around a player is six days, so we’ll look at how that pans out over the next 24 hours. Johnny’s fine. We decided to get him and Conor off (for precautionary reasons).”

The defence and lineout, which had a 100% return from twelve throws, provided solid foundations for Ireland in their opening game in Japan. Second rows Iain Henderson and James Ryan were prominent figures in both areas, with the former’s early defence-splitting break setting the tone for Ireland’s super-charged start.

Hendy started the game really well, obviously we scored on the back of his burst. He’s a powerful athlete. I thought he really accelerated well, got through those first couple of tackles. He worked his way around the pitch really well.

“Our lineout functioned really well with him and James Ryan sharing the responsibility of calling, and defensively he worked really hard closing the gap. You can’t afford to give Scotland any space and I thought Hendy was alert the whole time.

“We didn’t get it (the defence) right all the time. Early on, when Bundee kinda knocked himself, we didn’t quite close that down and we had to scramble into the corner. But I was really happy that we got into the corners and got off the line in the middle of the pitch so that they didn’t have front-foot ball.

“Finn Russell sits on the axis and runs in either side. He’s very hard to shut down because he runs in late and you’re not sure which side he’s coming. So I was delighted with the defensive performance.”

While they are up-and-running now with five points and a healthy +24 differential, Schmidt knows things will only get tougher as they head towards the knockout stages. As things stand, the likely scenario would be that Ireland play South Africa, who were 23-13 losers to New Zealand, in the quarter-finals.

Any potential focus on the Springboks will be put on the back burner as Japan are no doubt relishing the chance to turn over the team that began the tournament as the world’s number one-ranked side. Could home advantage inspire the Brave Blossoms to another World Cup giant-killing next weekend?

“Watching Japan, that first half they played against England (last year), and they went through the Pacific Nations Cup unbeaten – they are a dangerous team. If they get some tempo, we might be on the back foot,” warned Schmidt.

“So we’ve just got to take it step by step. We won’t be talking too much about South Africa. I did watch their game against New Zealand (last night). It was a heavyweight contest, a super game, maybe slightly different conditions. But South Africa were bristling and the All Blacks, at times, were brilliant.”