Eight of the starting XV will be making their first appearance at the global tournament. A member of the 2007, 2011 and 2015 squads, Best packs down at hooker for his 121st Ireland cap and his twelfth World Cup appearance.

Head coach Joe Schmidt has made five changes to the team that defeated Wales 19-10 a fortnight ago in the final warm-up match. Jordan Larmour, one of five World Cup debutants in the back-line, moves to full-back in place of Rob Kearney (calf niggle).

Andrew Conway, who has scored four tries in his last six Tests, and Jacob Stockdale, with three tries in two outings against Scotland, will offer significant threats on either wing, while Garry Ringrose slots in alongside Bundee Aki in midfield. Keith Earls (thigh) and Robbie Henshaw (hamstring) both miss out.

Jonathan Sexton and Conor Murray provide plenty of World Cup experience at half-back, having both played in the 2011 and 2015 editions. Vice-captain Peter O’Mahony resumes at blindside flanker, winning his 60th cap at the start of his third World Cup tournament.

The back row is completed by Josh van der Flier and CJ Stander, who reverts to number 8, and Iain Henderson, a returning player from England 2015, rejoins James Ryan in the second row. Leinster pair Cian Healy and Tadhg Furlong flank Best in a formidable front row.

The eight players on the Irish bench are all featuring at their first World Cup – Niall Scannell, Dave Kilcoyne and Andrew Porter cover the front row, Tadhg Beirne and Jack Conan are the other forward replacements, and Luke McGrath, Jack Carty and Chris Farrell are the back-line options. 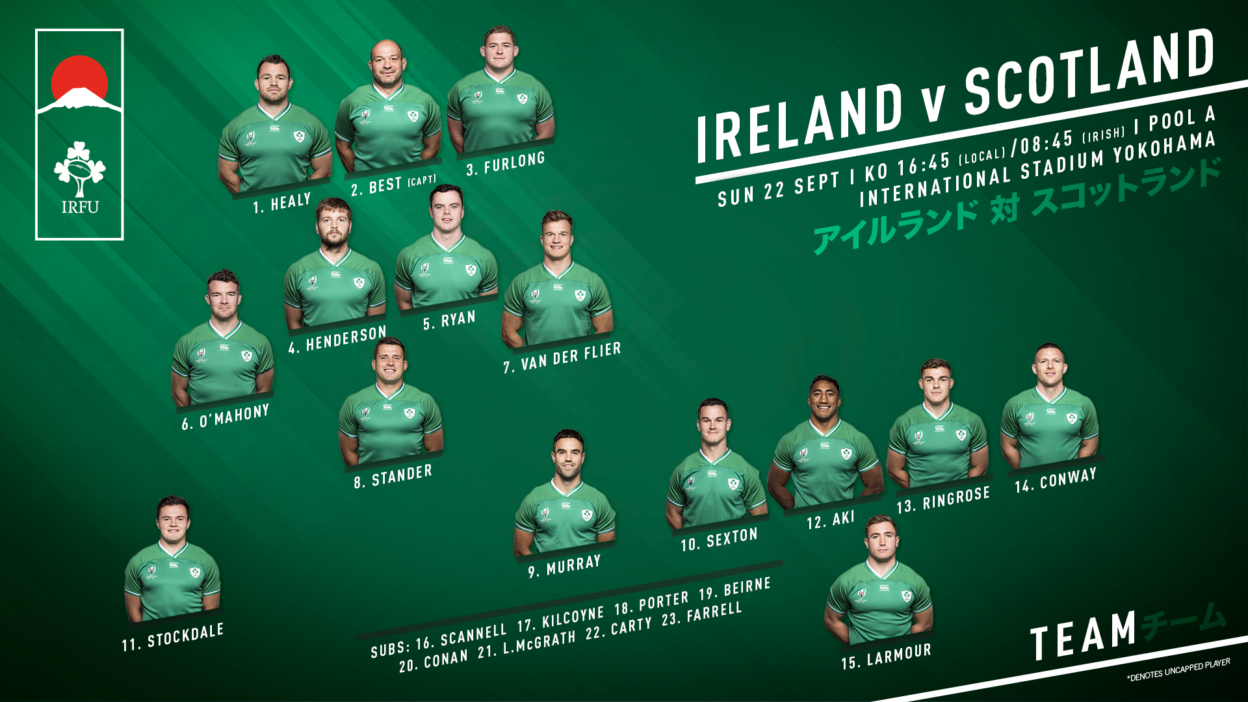 Asked about his side peaking at just the right time in Yokohama, Schmidt said: “You’ve just got to hope so, I can’t guarantee anything. In 48 hours’ time we’ll have a better idea. We’ll be just arriving in the stadium and getting ready to warm up, I’ll be anxious, and so will many others. Because you never quite know.

“But one thing I’ll be really confident of is that we’ll be tough to beat. That in 48 hours’ time I think you’ll see a very collective effort, and that effort will make us tough to beat. I’ve no doubt that the Scots will have been working away and will make themselves something similar.

“I don’t think there’s a huge amount between the two teams, so whoever does get the bounce of the ball or just be a little more efficient than the other just may tip the balance.”

Speaking about the team selection and the players working back from injuries, he admitted: “It was really just that we were getting tight for time. The best continuity we had was to have the guys we’d had training through the time we’ve been here.

It’s exciting to have the back-three we’ve got as well. It’s a great opportunity and a fantastic challenge. I think that Andrew and Jordan’s enthusiasm is something that’s contagious, their ability to get themselves into the game.

“Andrew has proven aerial ability and that will be really useful for us. I still have the vision very clearly in my mind of Jordan Larmour beating Israel Folau to a ball in the third Test in Sydney on our Australian tour last year.

“So he’s very good there as well, and of course Jacob is a big man in the back-field. They’re all feeding off each other, they are all very, very keen to impress, and now they have that opportunity.

“Iain Henderson has almost got 50 caps. He was involved in the big games at the last World Cup last time and to have that experience is really important, particularly in the first game out.

“Jean Kleyn, I have no doubt, he will feature in some really important games for us. Tadhg Beirne coming off the bench has the ability to change the game up. We have also got Jack Conan on the bench as well but Tadhg puts really great pressure on the ball and he has a little bit more time with us than Jean.”

He added: “You’ll see Joey (Carbery) will run fully in the warm-up as a reserve back. Keith Earls was the sharpest player at training on Wednesday. He was certainly the quickest. He was very, very sharp. Rob Kearney trained well as well.”