Jordan Larmour admitted there are still areas of improvement for Ireland to target as he assessed their second successive victory over Wales in the GUINNESS Summer Series.

Thanks to tries from Larmour’s Leinster team-mates Rob Kearney, Tadhg Furlong and James Ryan, Ireland enjoyed a 19-10 success against the current Grand Slam champions at the Aviva Stadium.

It was a memorable send-off at the Lansdowne Road venue for head coach Joe Schmidt and captain Rory Best, as well as scrum coach Greg Feek. Nonetheless, there is still a long road ahead for the squad as they embark on their Rugby World Cup campaign in Japan in the coming weeks.

“We talked before, all these games we want to keep building, keep getting better throughout each game,” admitted Larmour, who played the full 80 minutes on the right wing. “I think that was a good performance, there’s still a lot to work on. Next week we’ll go through the review and take our learnings from there, and just try keep kicking on.

“Especially in Besty and Joe’s last game in the Aviva. That was a big thing in the back of our minds. We wanted to put a big performance down for them. They’ve given so much to Irish Rugby, so pleased how it went. Lads are working hard in training, doing their extras. It’s nice when you get a performance like that, but there’s still a lot to work on.” 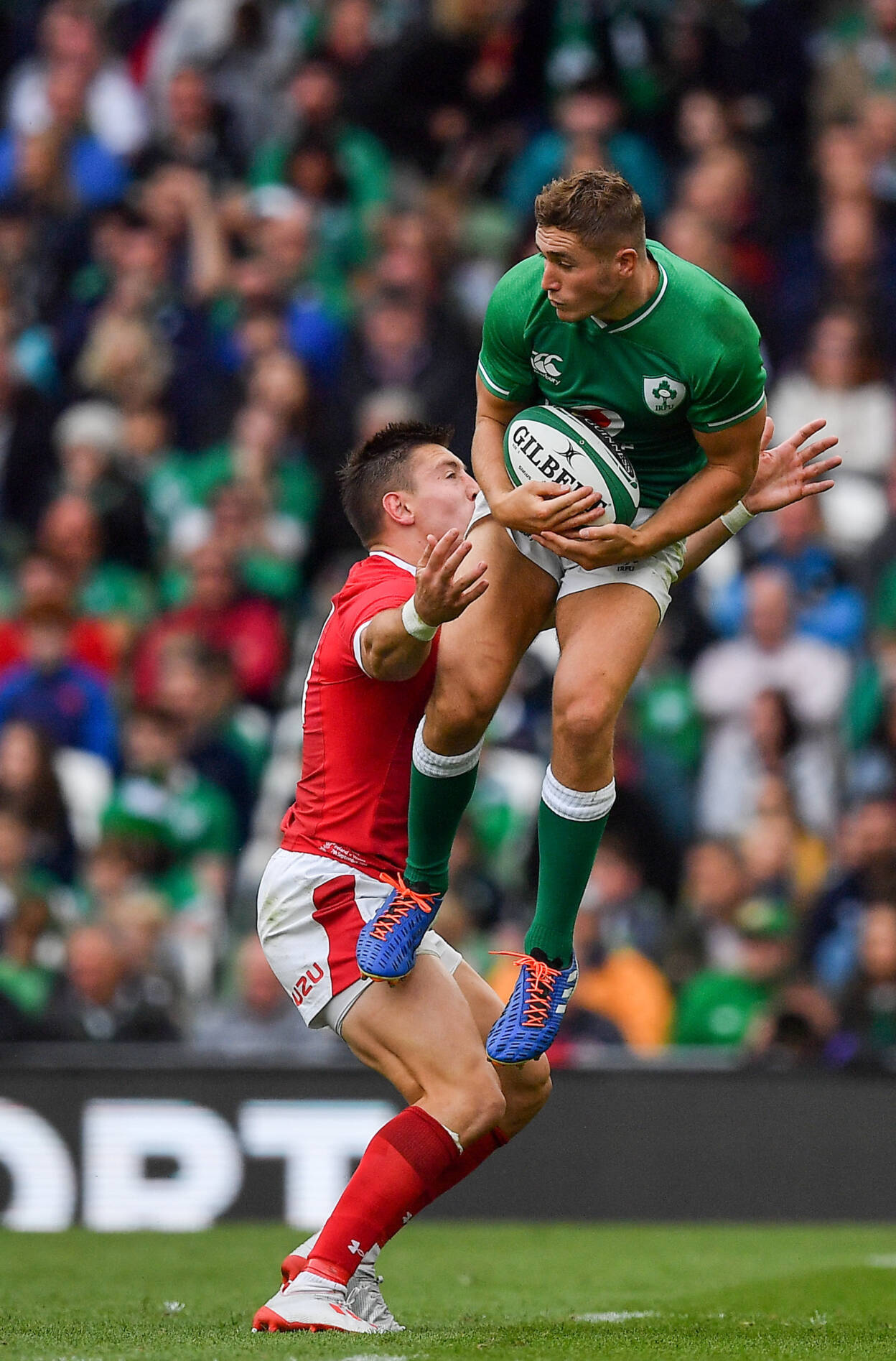 After Hadleigh Parkes’ converted try left them 10-7 behind at half-time, Ireland responded with 12 unanswered points during a gear-shifting third quarter. This was a significant turnaround from the hosts, but Larmour insisted it was a cool and collected dressing room during the interval.

“It was still pretty calm at half-time. Just keep doing the same thing, keep getting off the line in defence and putting big shots in. A few of the boys were doing that today, and just in attack, keep running onto the ball.

“Keep organising our shape and have two-sided attacks. The message didn’t really change (for the second half), it was just keep doing the same thing. A few tries came and (we’re) happy enough.”

Their impressive second half display saw Ireland largely make inroads with the formula that served them so well during their magnificent Grand Slam success of 2018, a year in which they also recorded their first ever home win over New Zealand.

Yet, Larmour still feels they have a bit to go before hitting their very best form – an ideal scenario heading towards their Pool A opener against Scotland at the World Cup on Sunday, September 22.

“We’re certainly pleased with the performance. We know we’ve a lot to work on and it’s all about keep building towards Japan. Even when we get there, keep trying to build and keep getting better as a team. You need to be playing matches to do that. Get that rhythm and get those combinations going.

“I wouldn’t say it’s our best performance, but it’s a step in the right direction. We put a lot of emphasis during the week around our defence. Going back to the England game, it wasn’t good enough. Too many missed tackles. I think that was in the back of everyone’s mind, (we) wanted to put a marker down. I think we did that today.”

When you factor in the three trophy-laden seasons he enjoyed at Leinster prior to his already record-breaking six-year stint with Ireland, the impact Schmidt has made on Irish Rugby has been enormous. While Larmour has joined the national ranks quite late on during Schmidt’s reign, the New Zealander has left a sizeable impression on the St. Mary’s College clubman.

“The first contact I had with him was when I was playing for a mixture of schools. We were playing a New Zealand team. They were travelling around Ireland, playing different teams. He was down at that game and that’s when I first met him. Then I went into camp when I was Under-20.

“I can’t put into words probably what he’s given to Irish Rugby. Just his attention to detail, his man-management, it’s incredible. He’d be up there with one of the best coaches I’ve ever had. Pleased how it went today, to send him off.” 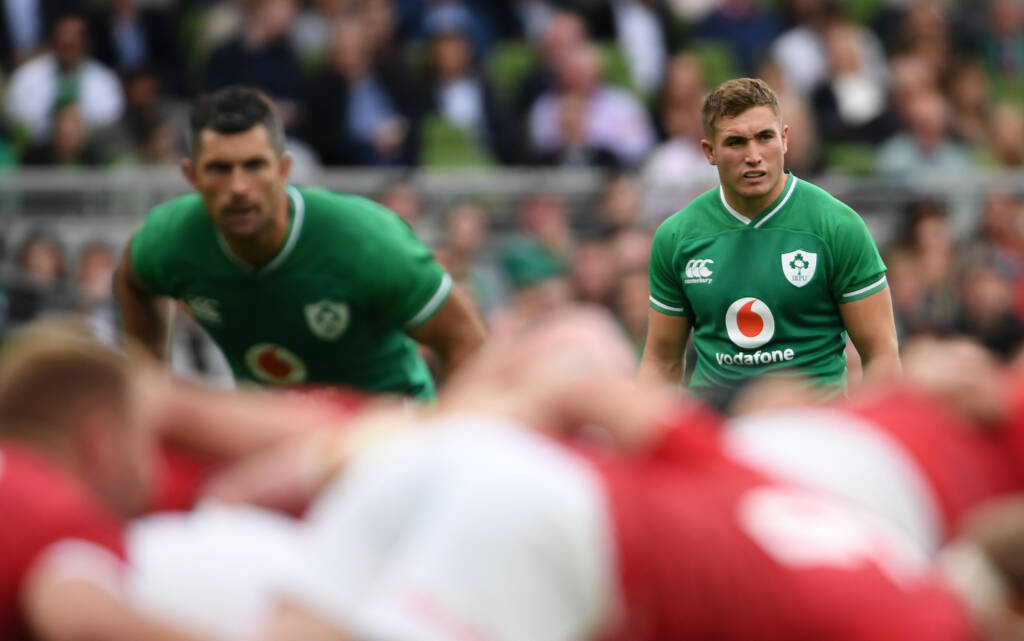 His selection in the 31-man squad for the World Cup is a continuation of Larmour’s meteoric rise through the ranks. The Dubliner only turned 22 in June and made his senior debut for Leinster as recently as September 2017.

A try-scoring performance in a league encounter with the Dragons served notice of his potential, and by the end of his maiden season, he was a starter in Heineken Champions Cup and GUINNESS PRO14 final successes over Racing 92 and the Scarlets respectively.

He also played a pivotal role off the bench for Ireland in three of their five victories during the 2018 Six Nations tournament, which saw Schmidt’s charges claim only the country’s third Grand Slam in Championship history.

There have been some setbacks for Larmour in a generally positive career to date, though. An injury saw him miss out on playing at the World Rugby U-20 Championship in Georgia, so not only will this be his first World Cup at senior level, it will be his first at any grade for Ireland.

With excitement continuing to build for their trip to South Asia, Larmour added: “I remember when I was a kid growing up, watching the World Cup and thinking, ‘I’d love to be there one day’. I have that opportunity now, so I want to grab it with both hands and not let the moment pass me by.”