Ireland captain Rory Best will win his 120th cap on his last appearance at the Aviva Stadium on Saturday afternoon (kick-off 2pm).

The GUINNESS Summer Series game against Wales also marks the final match for Joe Schmidt on Irish soil. Best, who will retire after the Rugby World Cup, leads a team showing twelve changes to the one that started last week’s 22-17 win over Wales in Cardiff. 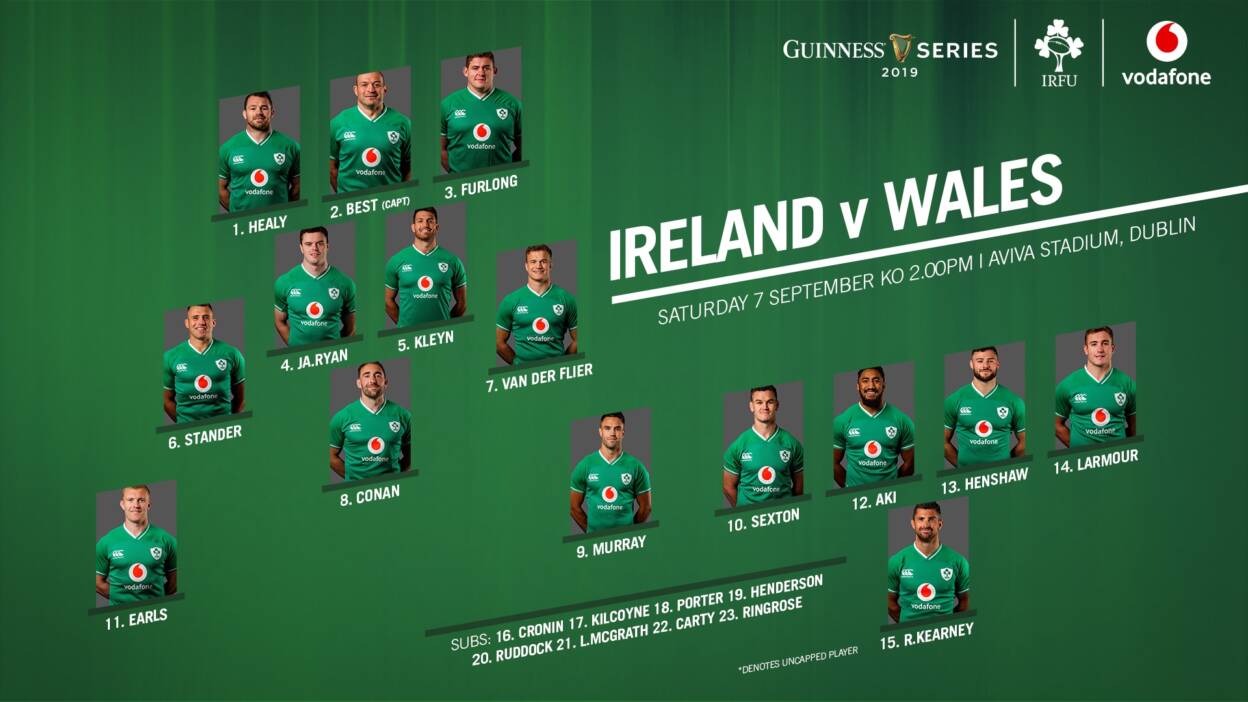 Recovered from the ankle injury he picked up against England, Cian Healy joins Best and Tadhg Furlong in an experienced front row, while James Ryan is a third different second row partner for Munster’s Jean Kleyn who makes his third start since making his debut against Italy last month.

Like Ryan, his Leinster colleague Jack Conan is retained at number 8 for back-to-back outings, with CJ Stander starting at blindside flanker for the first time since the 2018 summer tour to Australia, and Josh van der Flier resuming at openside.

There are seasonal debuts in the back-line for Jonathan Sexton, Robbie Henshaw and Keith Earls, as a fully fit Sexton reunites with Conor Murray at half-back and Henshaw pairs up with Bundee Aki in the centre for the first time since Ireland’s 2018 series win over Australia.

Earls, who is set to play in his third Rugby World Cup, links up with Leinster duo Rob Kearney and Jordan Larmour in the back-three. One more try for Earls – a 31st at international level – would see him replace Tommy Bowe as Ireland’s second top try scorer of all-time.

There are six players on the bench who got game-time at the Principality Stadium, including man-of-the-match Jack Carty. Replacement hooker Sean Cronin is in line to win his 70th cap, while Rhys Ruddock, Ireland’s captain for their most recent home game against Italy, provides the back row cover.

Speaking at the team announcement in Carton House, defence coach Andy Farrell commented: “(Johnny, Robbie and Keith) are raring to go. Have been held back for at least a week or two and can’t wait to get going this weekend. Keith is fine, he hit his highest speed score today in training as he was going to score a try in the corner.

“It’s our last game before we get on the plane on Wednesday. We’re after a performance that we’re proud of and there’s an extra reason for that with it being Rory’s last game at the Aviva and Joe’s as well, obviously.

“The important thing is that we put the performance in, the cohesive performance and the right mental attitude to take forward into two weeks’ time when we start the World Cup against Scotland. Yes, we’re down to 31, but there’s still massive competition for places for who takes the field in that first game.

“There’s people getting their first starts, (we’re) trying to get a few different combinations going and still having a look (at selection). Everyone wants to be involved in that Scotland game, and the guys that take the field on Saturday are in the shop window to put their best foot forward for a start in the first World Cup game.”