Two of the iconic figures of Irish Rugby, current head coach Joe Schmidt and out-half Jonathan Sexton, have been revealed as the images chosen to celebrate the sport ahead of Ireland’s departure for Japan. 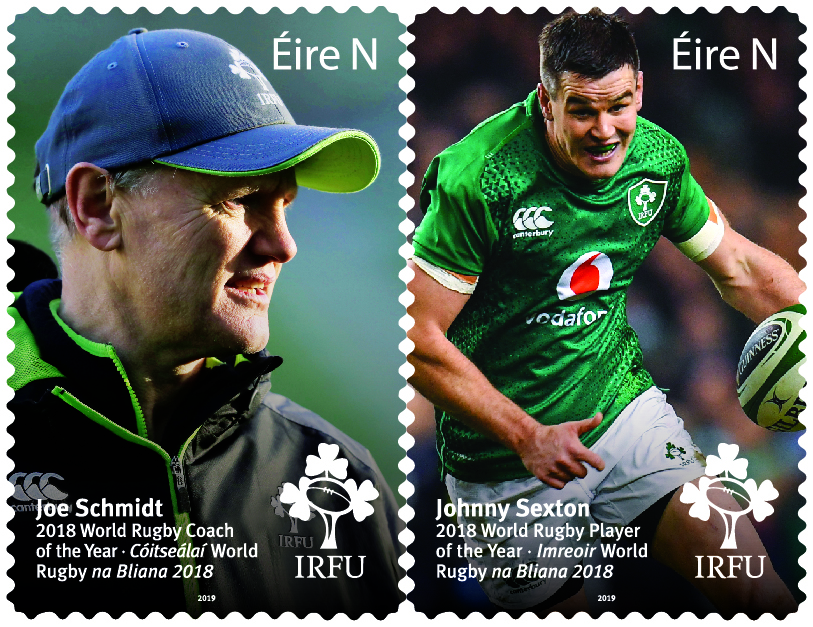 The two men, who have steered Ireland’s rugby success in recent years, were present at the Aviva Stadium on Wednesday as An Post unveiled a two-stamp set celebrating Irish Rugby. The €1 stamps, created by leading Irish design house Zinc Design Consultants, are on sale at main post offices, at Dublin’s GPO and online at irishstamps.ie. A First Day Cover (FDC) envelope, and miniature sheet also featuring the stamp images of both men, has also been issued.

Schmidt, the 2018 World Rugby Coach of the Year, has a host of success in the sport under his belt including three Guinness Six Nations titles, a 2018 Grand Slam, and maintaining Ireland’s place at the top table of world rugby. A photograph of the New Zealander by Sportsfile photographer Ramsey Cardy is one of the stamp images chosen by An Post.

Sexton, Ireland’s consistently impressive number 10 and the 2018 World Player of the Year, is captured in characteristic all action pose by Dan Sheridan from Inpho Photography. Both photos feature in the accompanying FDC and miniature sheet which will be collector’s items for both sports fans and stamp enthusiasts.

When I first arrived in Ireland in the early 1990s to work as a school teacher and play with Mullingar RFC, I never imagined the impact Ireland would have on my life and that of my family.

“I have been lucky to work with so many talented people and have experienced some incredible days with both Leinster and the Ireland squad. Since coming to Ireland we have been treated with kindness and generosity by so many people and today is a great honour for me and my family.”

It is a great honour for me personally and for my family to feature on a national stamp. Although it is a proud personal moment, it is the hard work and dedication of this Ireland squad that has achieved so much together over the past few years that sees Irish Rugby’s success recognised by An Post.”

David McRedmond, Chief Executive of An Post, said that given the position of sport and of rugby in the fabric or Irish life, it was fitting that two of Irish sport’s most iconic figures would be the central images when it came to celebrating Irish rugby. He added:

‘An Post are delighted that we have been able to put together this tribute as the Irish team gets ready to perform yet again on the world stage. These stamps are a ‘Thank You’ to this team of remarkable individuals and to Irish Rugby for all that they mean to Ireland and the Irish everywhere.”

‘The IRFU are delighted to have been involved in this stamp series which marks the importance of rugby both historically and today. These stamps honour the work of all those involved in Irish Rugby at this exciting time for the sport..”

The stamp unveiling was attended by a glittering array of leading representatives of Irish Rugby, including Des Kavanagh, Senior Vice-President of the IRFU, Sene Naoupu, Ireland international and current Leinster Women’s captain, and past greats Hugo MacNeill and David Wallace.