Andrew Porter made his fourth start for Ireland against Italy, getting game-time at both loosehead and tighthead prop ©INPHO/James Crombie

Heading into his second Rugby World Cup as Ireland head coach, Joe Schmidt is hoping that several players in the final squad of 31 for the tournament can offer the versatility to make Ireland genuine contenders for the title.

This was in evidence during yesterday’s 29-10 victory over Italy in the GUINNESS Summer Series at the Aviva Stadium. Having started the game at tighthead prop, Leinster’s Andrew Porter was switched to his old position of loosehead when the second half got underway.

He eventually made way for Cian Healy with nine minutes remaining, but it proved to be a useful exercise for Porter who, having started his career as a loosehead, first featured at tighthead for Leinster against Ulster in May 2017.

“Still a bit stiff from it. The neck is a bit stiffer than it would be usually after a game. Hopefully I’ll get more used to it again and keep working on it in training. It has always been something coaches go over with me. 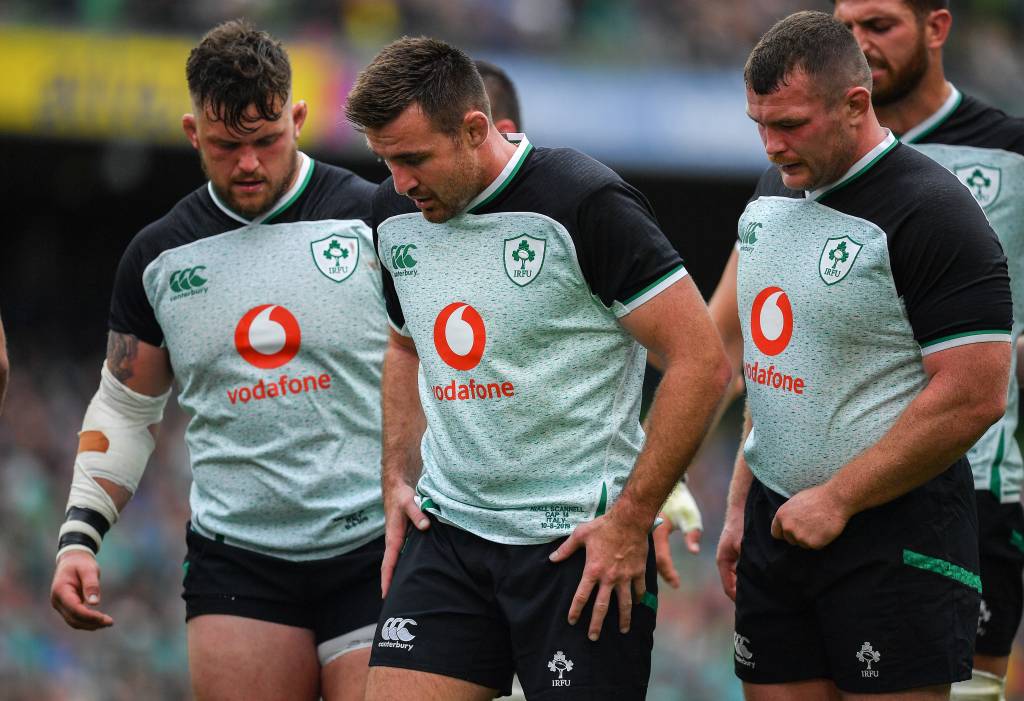 Despite now making real progress as a provincial and international standard tighthead, Porter admits he initially found it difficult to adjust, saying: “At the beginning it was very tough. It’s kinda like writing with your bad hand a bit. Practicing the reps is the best thing you can do and you get to train against the best guys in the world. That’s helped over the last few years and the past few months.”

Saturday’s game was Porter’s 15th at senior level for Ireland and just his fourth as a starter in the front row. While accepting it was a far from perfect performance, he was pleased to get a win which saw the home side twice come from behind against a resolute Italian outfit.

“I think it’s great to start off a season with a win like that and especially the first game of the season. Obviously things aren’t always going to go to plan and stuff like that, but we worked around that. Came out with a good win, especially guys making their debuts,” he said.

“It was great to get them the game-time as well and I think they acquitted themselves very well on the occasion. It’s like any game really. We have to dig in and grit your teeth a bit. Push forward the hard yards. The team did really well to come back from that.

“Joey (Carbery) and Jack Carty ran the game very well at 10. They deserve huge credit for that. When we go down behind the posts, we have a small talk. Regather ourselves and look forward to the next moment of the game.”

The debutants Porter refers to were Munster duo Jean Kleyn and Mike Haley. He was particularly impressed by the impact big lock Kleyn had in the Irish scrum and how well both players have gelled with their new team-mates during their time in camp in advance of the World Cup warm-up fixtures.

“He’s (Kleyn) a big boy. Great to have behind you in a scrum. Energetic around the park, I think he did really well on his debut. We see what he did for Munster over the past few seasons as well. It’s great being able to play with him and great being able to get new combinations in with the team in games like these as well. Trying new things before we head off.

“We’ve been together for so many weeks now. It almost feels like he’s been here the whole time. That’s what everyone buys into. We buy into the whole system. The whole Irish Rugby, the way we play. They (Kleyn and Haley) have come on leaps and bounds in the past few weeks. It feels like they’ve been here for longer.”

With the current front row options available to Schmidt, Porter knows he cannot afford to rest on his laurels. Rather than viewing the fight for the 31-man World Cup squad as a heavy burden on his shoulders, he is relishing the challenge that lies in front of him.

“It’s 43 in the squad at the moment and it has to be cut to 31. The competition is great because it pushes everyone and pushes yourself as well. I don’t think anyone is really safe at the moment. It pushes standards and stuff like that.