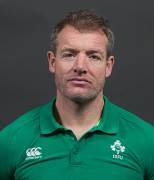 Former Ireland, Ulster and Ballymena winger, James Topping won 8 international caps between 1996 and 2003, as well as representing Ireland at Sevens.

He made his debut for Ulster in 1994 and played more than 100 times for the province. He was part of the successful Ulster teams which won the European Cup in 1999, Celtic Cup in 2003 and Celtic League in 2006.

He is an Elite Player Development Officer with Ulster Rugby, where he is responsible for nurturing the talents of the young players in the programme from U16-Ulster Ravens. He is the current U17 Ulster Head Coach, U18 Ulster Assistant Coach and Ulster Ravens Assistant Coach.