UCD’s wait for their first Division 1A win of the season is over after getting the better of student rivals UCC on a 40-31 scoreline at Belfield.

It would have been a more comfortable margin but for Matthew Bowen’s hat-trick heroics in earning the Corkmen a bonus point.

John Hodnett, who started alongside his Munster colleague Jack O’Sullivan, was busy at the Bowl, breaking through from halfway to help set up Luke Kerr’s 17th-minute try.

He was also sin-binned at a crucial stage in the second half when UCD were able to get out of harm’s way with two more tries.

A word for ‘Mitch’ Bowen, the UCC flyer is back to full fitness and looking as sharp as ever. He had a quick-fire double, scoring directly from a second half restart, before earning the bonus point with a superb 90-metre intercept score, seven minutes from the end.

Barely 90 seconds into the game, UCC were behind their posts having leaked the opening try. A dropped high ball and chase-back had them kicking a goal-line dropout and UCD were ruthless in return. 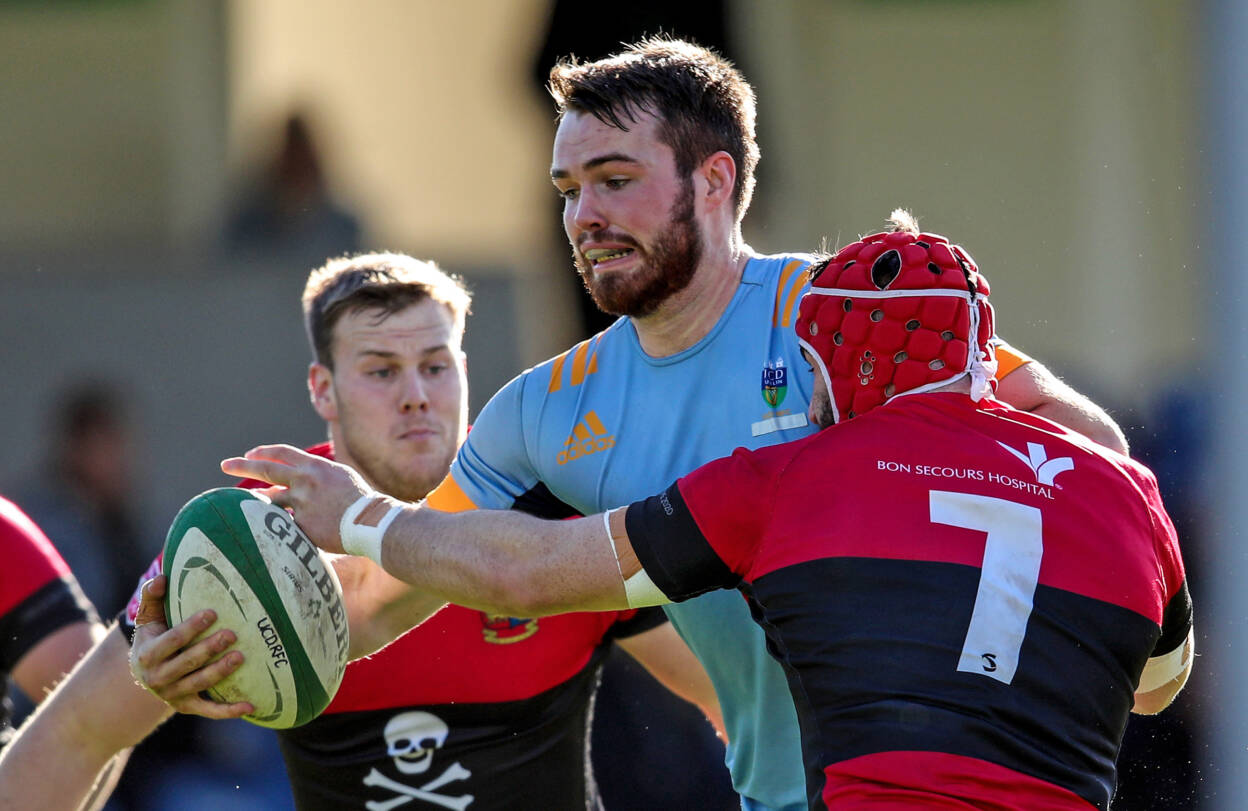 Back rowers Ronan Foley and Diarmuid Mangan carried strongly before Patterson managed to wriggle in under the posts, with UCC’s Sam Tarleton and Corey Hanlon unable to stop him.

With the conversion dispatched by Tarrant, Patterson was soon threatening again from a scrum on the UCC 22. A couple of pick-and-goes drew them closer before hooker Sheehan burrowed over to make it 12-0.

The supporters present were treated to some free-flowing and exciting passages of play, UCC drawing breath before a vital turnover from Hodnett avoided the concession of a third try in the 10th minute.

The former Ireland Under-20 back rower popped up in attack towards the end of the opening quarter. He wrestled his way through midfield traffic, offloading for Bowen to raid through and give scrum half Kerr a 30-metre run-in for his try.

After Coomber’s missed conversion from the left, UCC suffered another setback when they lost out-half Cian Whooley to injury. It was not long until his opposite number Tarrant was touching down in the right corner.

Bowen was exposed by a well-placed kick from Patterson, Tarrant swooping on the bouncing ball and finishing off an opportunist score in the right corner. He added an excellent conversion for a 19-5 lead. 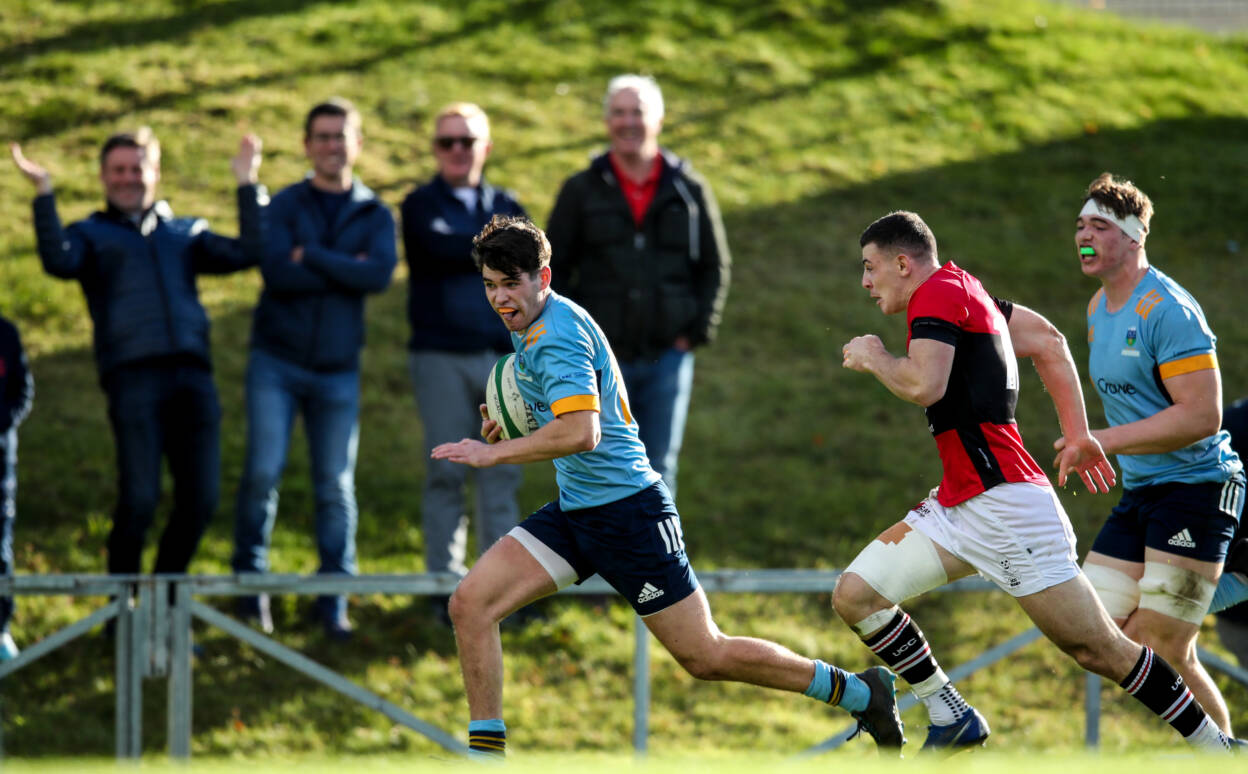 Past the half hour mark, Hodnett was at the centre of a well-worked UCC lineout move after UCD were given a warning about their discipline. However, a couple of wayward passes added to the visitors’ frustration.

Indeed, UCD repeated their fast start from the opening half. Inside two minutes of the restart, and following a collective attacking wave, Patterson stepped inside Billy Kiernan to snipe in under the posts.

Tarrant’s conversion was followed by some Bowen magic, the quick-witted winger set free through the middle by Kiernan and he evaded the clutches of both Patterson and Chris Cosgrave to score behind the posts.

It was a 12-point surge from UCC as they scored again directly from the restart. Number 8 O’Sullivan started a fluid four-man attack, his carry and offload inviting Richard Thompson to gallop up to halfway.

He linked with fellow replacement Louis Kahn whose superb offload back inside had hooker Scott Buckley reaching the hosts’ 22. Two long passes and two missed tackles later, Bowen wormed his way over in the left corner. 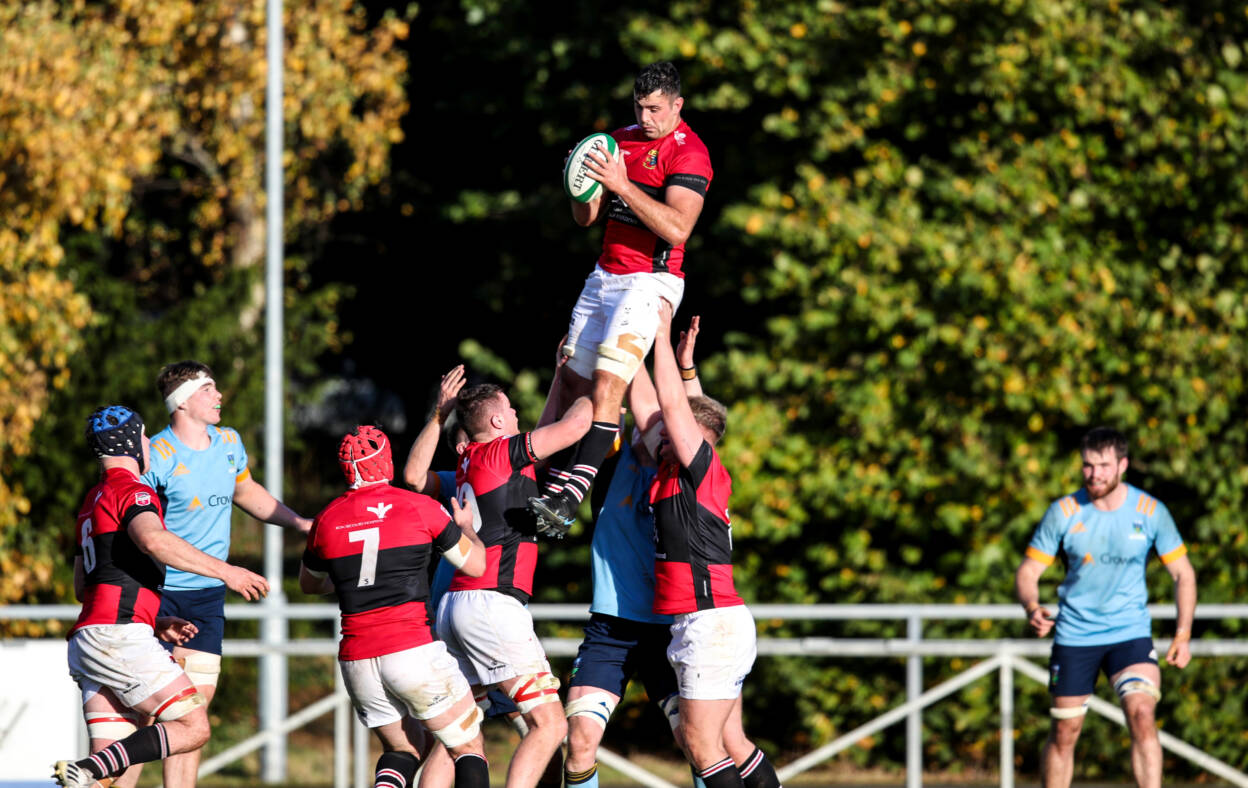 Neil Lucey’s charges were now right back in the hunt at 26-17 down, but some of their good work was undone when a patched-up Hodnett, who had just come back onto the field, was sin-binned.

He saw yellow for no clear release during a promising UCD break, and although Tarrant hit the post with his penalty attempt, a miscued clearance kick from Kiernan had the home side pressing again for a try.

Some nifty footwork from centre Ryan took him past Daniel Squires and in beside the posts, Tarrant’s conversion widening the margin to 16 points with less than half an hour remaining.

O’Brien effectively sealed the result just two-and-a-half minutes later, striding clear up the left touchline to complete a fine breakaway effort. Tarrant took his own haul to 15 points with another crisp conversion. 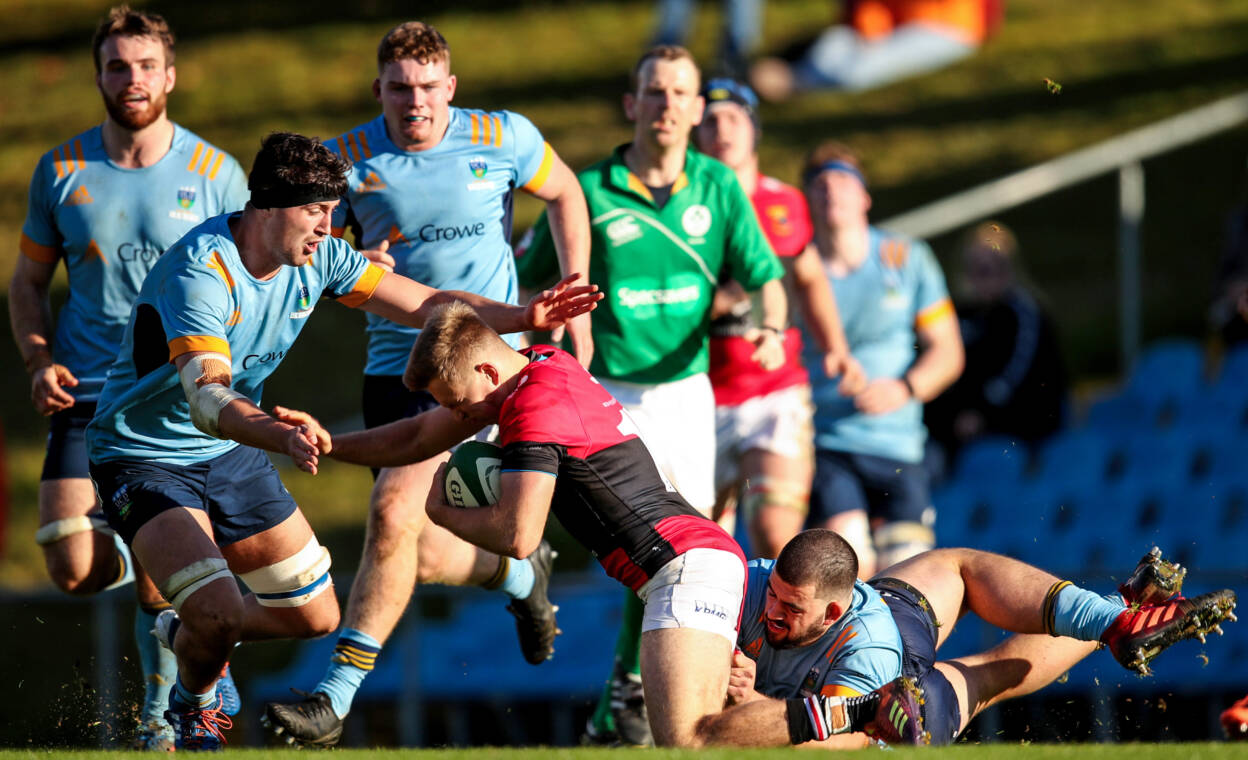 Back came UCC, winning a scrum penalty before Hodnett’s return from the bin. O’Sullivan won a penalty at the breakdown in the UCD 22, and Bowen collected Kahn’s long pass and dished it off for Coomber to grab the bonus point score.

Replacement Kiernan converted and also added the extras to Bowen’s intercept try, a lung-busting score just as UCD were building for a possible try of their own.

The Cork outfit had the bit between their teeth with a second bonus point in the offing, but a well-won Rory McGuire turnover and a costly knock-on moved them out of range, allowing UCD to end the game in the visitors’ 22.