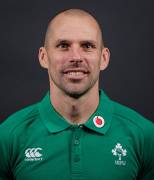 Jason was educated in Clonkeen College, Dublin and obtained a degree in Sports Science from the University of Limerick in 1998.

He then held the position of senior fitness advisor for three years with Leinster before leaving to complete a Masters in Exercise Physiology from Florida State University.

He was appointed Strength & Conditioning Coach for the Senior squad in the summer of 2007.

The IRFU’s #Analytica2020 two day webinar aimed at broadening knowledge of the role of analytics in preparing, analysing and reviewing…
#GUINNESSPRO14 27th May 2020
News

Part 2 of of our #TeamOfUs workouts are out now on social channels. Team sponsor Vodafone Ireland has teamed up…