Six Nations Rugby together with its constituent unions and federations is extremely pleased to announce details of the Autumn Nations Cup – a completely new and innovative tournament that will take place over four weekends between November 13th and December 6th, 2020.

The Autumn Nations Cup 2020 will be a unique eight-team competition, involving the Six Nations as well as the rugby unions of Georgia and Fiji.

Ireland’s home games in the tournament will be played as the Guinness Series 2020.

In recent months as the scale of the challenge presented by the Covid-19 pandemic emerged, it became apparent that fulfilling the traditional Autumn International fixtures would not be possible particularly as a result of travel restrictions preventing certain international teams from competing in scheduled fixtures.

This newly created tournament will replace the traditional Autumn International window for 2020 and ensures rugby fans all over the world will be treated to top class international rugby this Autumn.

The format for the Autumn Nations Cup will be two pools of four – Group A will include England, Ireland, Wales and Georgia with Group B comprising of France, Scotland, Italy and Fiji.

The action gets underway over the weekend of 13th/14th/15th November kicking off with the mouth-watering clash of Andy Farrell‘s Ireland and Wales at the Aviva Stadium on the Friday 13th November (Kick-off 7pm). This will be followed on Saturday by England v Georgia and Italy v Scotland, while on Sunday France will entertain Fiji.

The Autumn Nations Cup will conclude on the weekend of the 5th and 6th December with a special final round of matches. Based on the pool rankings coming into the final weekend, each team will face off against the team ranked in their same position in the opposite pool, a format which promises some intriguing and unexpected clashes.

Broadcast arrangements in specific markets will be announced in due course. 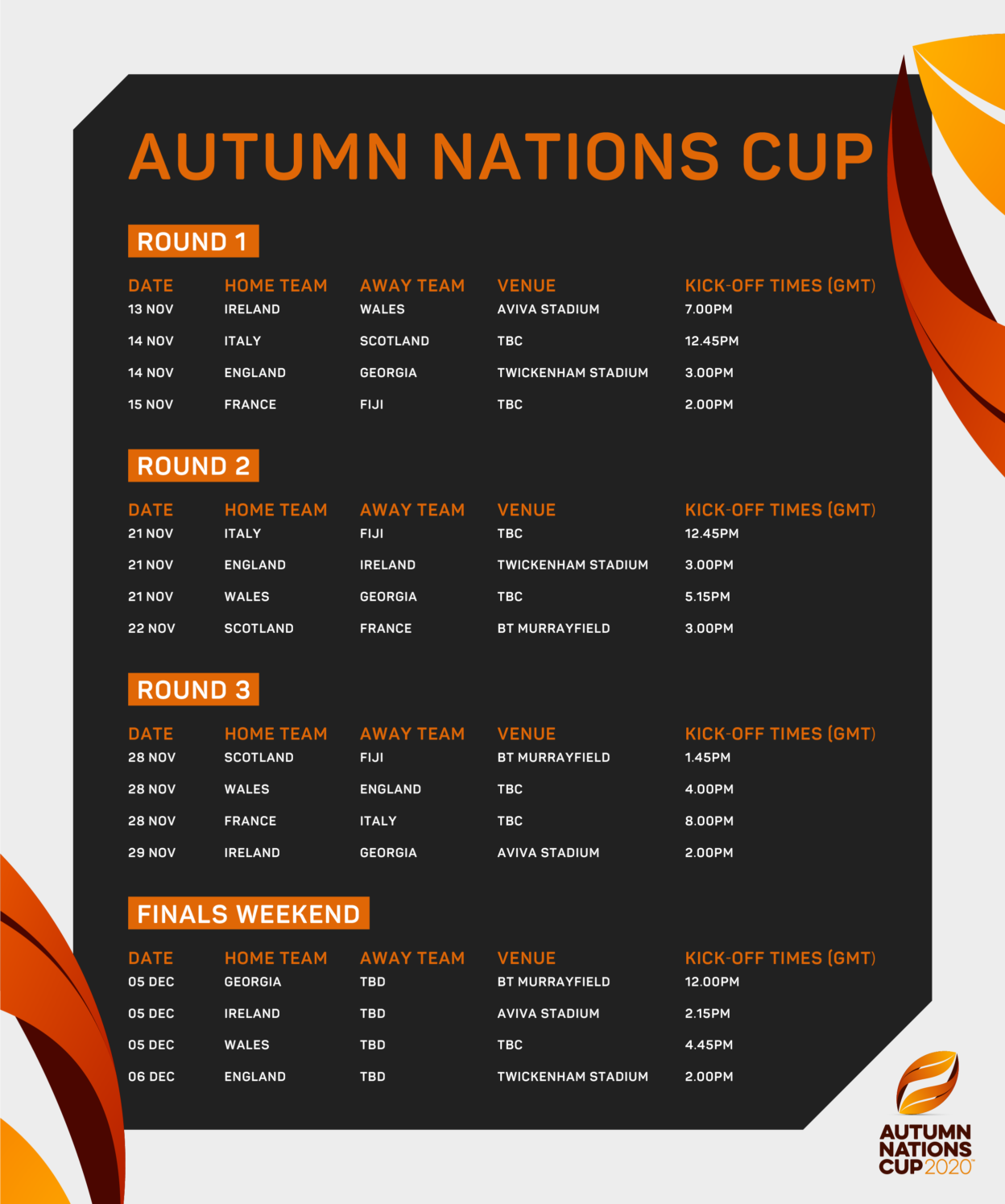 “We are absolutely delighted to formally announce details of the Autumn Nations Cup. A significant amount of time and effort has gone into delivering this new tournament format in testing circumstances and the spirit of collaboration amongst key stakeholders has been outstanding.

“While the challenges presented by the Covid-19 pandemic made the traditional Autumn Test window unfeasible, we remained determined to deliver a unique and compelling tournament proposition which would ensure world class rugby for our fans globally, and competitive matches for players, unions and federations.

“We cannot wait for the tournament to get underway in November and fans can look forward to some outstanding matches featuring some of the greatest players in the world. We are especially pleased to be joined by Fiji and Georgia and expect them both to be tremendous additions to the competition.”