The Ireland Club XV team to play Scotland Club XV in the opening game of the 2020 Club International Series at Netherdale on Friday (kick-off 7.30pm) has been confirmed.

Four players who took part in the 2019 series return and are joined by two other players with previous experience at this level.

Alan Kennedy featured against England Counties in 2017 and has been named as captain. The Young Munster man will start alongside Brian Hayes in the second row. John Sutton and Andy Keating are named in the front row with the uncapped Conor Maguire.

Michael Melia starts his fifth consecutive club international and packs down in the back row with Paul Derham and John Foley.

Aran Hehir and James Taylor form an exciting partnership at half back and outside Taylor will be his UCC club mate Peter Sylvester. Pa Ryan is at outside centre with a back three of Jamie Heuston, Colm Hogan and Jack Ringrose. 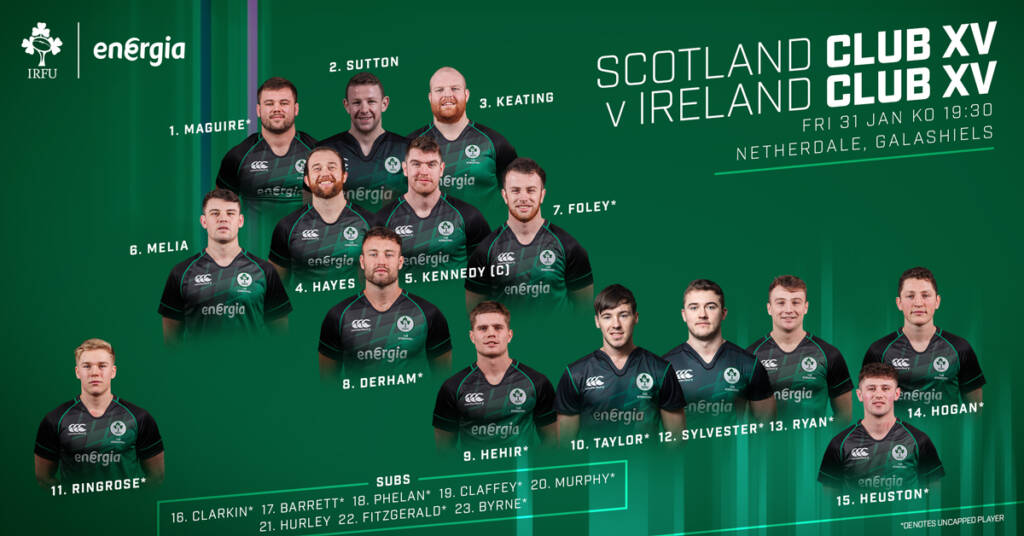 “I’m excited to be working with this group of players. I’ve thoroughly enjoyed the last few weeks of preparation and I think they’re going to grab this opportunity with both hands. They’re young, they’re ambitious and above all talented.”

“The challenge has been managing training camps alongside players being involved with their clubs.” said Prendergast. “Our extended squad has evolved quite a bit.

“We’ve sprinkled some experience in there, but a lot of these guys will be playing in a club international for the first time so it’s massively exciting for them.”

The squad is made up of some of the most exciting players competing in the Energia All-Ireland League while the starting XV has an average age of 23. Terenure College’s Adam Clarkin is a late inclusion to the squad as reserve hooker and 11 clubs in total are represented.

Gerry Hurley is among the replacements after some impressive form for Cork Constitution in Division 1A of the Energia All-Ireland League. Hurley is a former Ireland Club XV captain and featured in the very first club international in 2006.

Alan Kennedy says there’s a great buzz among the players.

“The team has been really focused and determined to get a result next week and I think we’re ready for it. The Head Coach made it really clear what he wants out of the squad. The sessions have been really sharp,” he said.

Ireland Club XV are the current holders of the Dalriada Cup, the trophy which goes to the side with the higher aggregate score over the two-match series. This year culminates again at Energia Park on Friday, February 7.