Anthony Eddy was a very proud man after watching his young Ireland squad’s hard work come to fruition with their qualification for 2019/20 HSBC World Rugby Sevens Series. It is a long way since humble beginnings for the IRFU Men’s Sevens Programme back in Rugby Europe Division C.

That first European title, won in Zenica, Bosnia in June 2015, got the newly-formed Ireland Sevens team up and running, with current stars Harry McNulty and Mark Roche on the pitch that day, along with future 15s international Adam Byrne. Terry Kennedy and Ian Fitzpatrick were involved a couple of weeks later in Zagreb where Ireland won Division B.

Their rise through the ranks has gathered serious pace in the last twelve months, firstly bouncing back from that heartbreaking semi-final exit at the 2018 World Series qualifier to win a historic bronze medal at the London 7s. Another top-eight finish followed in Paris before they won the Challenge Trophy at the Rugby World Cup Sevens and added more silverware with a first ever European Grand Prix Series crown.

Hardened by previous setbacks, Ireland overcame illness and injury in camp and a pool-stage wobble against Uruguay to emerge as the best team in humid Hong Kong over the weekend. They showed huge grit to score two closing tries to knock out Germany in the last-four, and a clinical attack and smothering defence steered them past the tournament hosts in the high-pressure final.

The relief was palpable for the players on the pitch, the team shaped by the coaching of Eddy and Stan McDowell – and the further expertise of James Topping, Allan Temple-Jones and Alan Walsh – had got the job done. Four years in the making, but it feels like they are only just getting started.

Reflecting on his side’s unbeaten six-match run in Hong Kong, Eddy said: “It feels great (to qualify). We had a go last year, we didn’t quite make it. We just missed out (against Japan). The boys have worked really hard for the last twelve months and I think they thoroughly deserved their victory and a spot on the World Series.

“We regrouped well (after drawing with Uruguay on Friday). We’re a tight group, we know when we’re playing well. We probably let ourselves down a little bit in that game. Also we lost a couple of boys through injury so ten players toughed it out for the last two days. They look after each other, they work hard for each other. They’re a good bunch of friends.”

The Australian, who was appointed to his current role as IRFU Director of Sevens and Women’s Rugby in December 2014, says getting the Men’s team onto the World Series ‘gives Irish Sevens a real boost’. Their debut as a core team comes in Dubai in December, but they will shortly return to London (May 25-26) and Paris (June 1-2) as an invitational side and no longer an unknown quantity.

Eddy continued: “We’ve already shown what our pathway can bring to players to progress to 15s and provincial teams, but now this gives other players an opportunity to be on the world stage continually around the World Series – another pathway to play in a green jersey and represent your country. 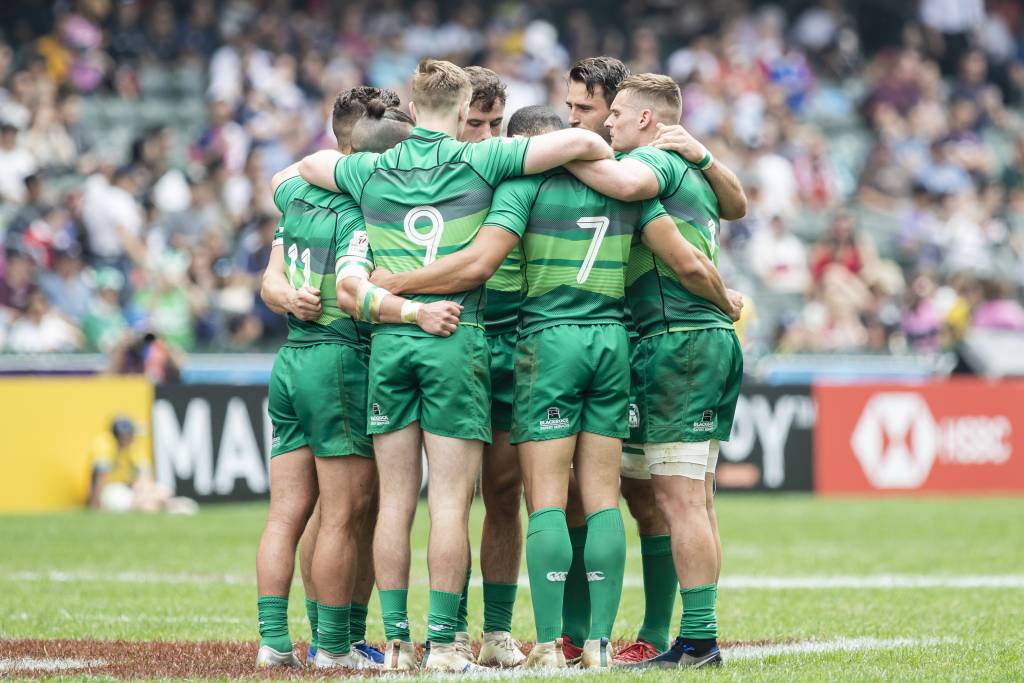 That is also a key event over the summer for captain Billy Dardis and his team-mates. They will aim to build further momentum heading into the Rugby Europe Olympic qualifier in Colomiers, France on July 13-14. The winning team will progress to Tokyo, with the second and third-placed sides having one more shot at the 2020 Games with the global Repechage tournament next year.

The 24-year-old Dardis was beaming as he summed up the squad’s delight at breaking onto the World Series circuit. “We’re just delighted with this. You reflect on the last 16 months, 24 months. It’s been a long hard road but to finally do it…we just stood on the pitch there and just couldn’t move, we’re just speechless. It’s just class,” he said, in the immediate aftermath of the 28-7 final victory over Hong Kong.

“We all spoke about it months ago and dream about it (winning in Hong Kong), so for it to actually happen it’s unreal. It won’t sink in for a couple of weeks. We’ll enjoy this, celebrate tonight and then think about in the next few months. We’ve got the Olympic qualifier in the next couple of months so that’s our next aim. To qualify for that in the summer would be two big boxes ticked.”

The Ireland squad in Hong Kong, all aged between 22 and 26, contained five ‘originals’ in McNulty, Roche, Kennedy, Fitzpatrick and Foster Horan. They were part of the initial 27-strong panel four years ago which Eddy and IRFU Performance Director David Nucifora, a long-time Sevens advocate, cut down from 300 applicants.