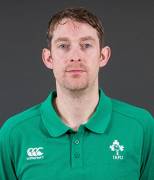 Andy graduated from Robert Gordon University in Aberdeen with an Honours degree in Physiotherapy and is currently studying a masters in sports and exercise medicine in the University of Ulster. He is a member of the CPSEM in Ireland.

He has a passion for both sport and physiotherapy which has allowed him initially work in rugby league with Leigh Centurions and St Helens. He also worked two seasons with Bolton Wanderers Football Club and began full time work in elite sport with Gloucester Rugby where he spent three seasons. More recently, Andy was Head Academy Physiotherapist at Leinster Rugby and is currently Senior Physiotherapist at Lansdowne FC who won the AIL in 2014-2015.