As the second and final day of the  IRFU #Analytica2020 Webinar approaches we take a look at the topics the panels will discuss tomorrow Thursday 28th May.

The aim of the two day conference is to broaden the knowledge of how sporting performances are prepared for, analysed in real time, and reviewed, and the role of analytics within each facet of performance.

A fantastic line-up of speakers has been assembled over the two days and all monies raised will go to our nominated charity Pieta House. 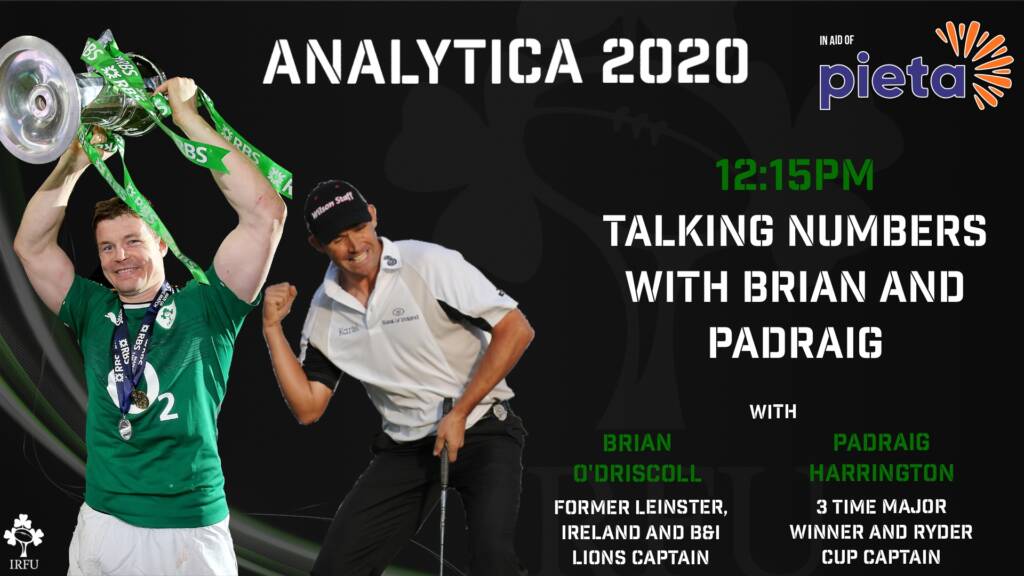 All times shown are IST/GMT+1

Selection for the British and Irish Lions is seen by many as the pinnacle of a rugby players career, and one of the most unique teams in sport. Equally so, for the backroom staff. The opening panel focuses on the British and Irish Lions tour to New Zealand in 2017. Having not won a tour in the land of the long white cloud since 1974, rival analysts from England, Ireland and Wales came together to plan against the World Champion All Blacks, ending in an eventual drawn series. Add to this panel the views from the opposition All Blacks, this is sure to be an interesting start to the day ahead. The panel will discuss…

In European sport, football clubs have been seen to lead the way in their use of GPS and advanced tracking data to better evaluate on-field performance and off-field recruitment. This technology allows access to previously unimaginable levels of information, allowing clubs to create advanced statistical models to maximise a team’s performance and preparation. Taking the best of this technology and combining it with a clubs existing coaching expertise has led to clubs such as Liverpool seeing large returns on investment. The new challenge for teams is to take these theoretical models away from the screens of scientists and bring them to life on the field. The assembled panel offers up a perfect storm of expertise, with a Professor of Mathematics, Head of Data with one of football’s European greats, and the Ireland rugby team strength and conditioning coach discussing:

Brian O’Driscoll, Ireland’s most capped international rugby player, captain of Ireland and the British and Irish Lions will discuss with three time major winner and current European Ryder Cup Team Captain Padraig Harrington the numbers that matter to them in preparation and review of performance.

PANEL 4: 13:30 – Data Under Pressure: When the Gut Takes Over in Decision Making

Rebel Ideas, published by Matthew Syed, makes the argument that individual intelligence is sometimes not enough to tackle complex problems and argues towards a more ‘cognitive diverse’. Decision making in healthcare, sport and business has moved quickly to leverage big data, machine learning and artificial intelligence in order to improve returns in outcome, performance and profits. However, with the increased volume of information comes the challenge of extracting the truly meaningful and actionable data. How sport and other industries have leveraged these insights will shape their sectors for the decades ahead. A panel blended of an Irish rugby captain with industry leaders from emergency medicine and aviation should make for interesting debate.  The panel will discuss

In North American sport, fans have been consuming data driven coverage for decades.  It is a more recent phenomenon across European sport and particularly in rugby where statistics and detailed match analysis are significant growth areas.  With a sea-change in consumer appetite for this type of content, the panel of Irish rugby journalists will combine with The Athletic’s data driven story-teller Alison Lukan, to discuss:

The penultimate panel switches tack to the emerging sports that are making waves. eSports is seen as the fast growing form of entertainment in the world, with video game revenues totalling $139 billion annually. Many professional football clubs have moved to create their own teams and leagues. PSG (Paris Saint-Germain) for example, took third prize in the Dota 2 2019 world championship; the winners prize was just short of $16 million dollars. To help explain the surge and take a look at what might be next, we’ve assembled a panel who are fully equipped to bring us in to the world of gaming and beyond! The panel will discuss:

The panel will discuss: