Andy Farrell leads Wigan out at Twickenham for their clash against Bath in 1996. ©Mike Hewitt/Allsport

Anyone desperately trawling through the sports channels in search of a sporting fix in the absence of any live action may have stumbled across a forgotten classic a couple of Fridays ago. The Clash of the Codes may not have resonated with viewers of a certain age, but anyone who tuned into the back-to-back re-runs of the two heavyweight showdowns between Wigan Warriors and Bath embarked on a thoroughly enjoyable trip down memory lane. And for Ireland supporters, in particular, a glimpse of Andy Farrell and Mike Catt going head-to-head in the prime of their respective playing careers certainly piqued interest further.

The Clash of the Codes was as straightforward as the name suggests. Two fixtures – one under rugby league rules, the other under rugby union rules – to determine which of the two superpowers from each code could claim superiority, while the prospect of seeing some of the top players at the time face-off at Maine Road and Twickenham generated huge interest in the series.

Both sides were stacked with international and home-grown talent, no more so than a 20-year-old Farrell and England international Catt, who would come up against each other for the first time to mark the start of a remarkable journey together, which most recently has seen them link back up on the Ireland coaching team.

In the first game at Manchester City’s Maine Road, Wigan – the powerhouse of rugby league – showed no mercy as they ran riot to record a 82-6 victory, with Martin Offiah scoring six tries as the power, pace and professionalism of the Warriors proved far too much for Bath in the 13-a-side game.

“There was just a huge difference physically and someone like Jason Robinson, I mean we had never seen anything like that, especially in space,” Catt, the Ireland Assistant Coach, tells IrishRugby.ie.

“The problem was any time one of our guys carried, Wigan pretty much put three guys into the tackle and hit him. It was relentless. After about 15 minutes we were just diving on the floor before going into contact. It was illegal at the time but we were just trying to generate quick ball. They were brutal, proper hits, and when Wigan had the space, they were just so dangerous, especially the backs.”

Offiah’s six-try hauled grabbed the headlines that day, but Wigan had standout performers throughout their ranks, including Farrell, Robinson, Henry Paul and Scott Quinnell, who would all go on to play union in the years to come.

“That was before the salary cap, so we had everyone playing,” Ireland Head Coach Farrell recalls. “The week after the Maine Road game, we played in the Middlesex Sevens at Twickenham to prepare for the return match and if you look at that side, it was ridiculous. We won the Sevens tournament and we didn’t know any of the rules, we just threw the ball around.

“It was crazy times for Wigan really. It was the start of the Super League era, the first Super League season, and we had arranged to play two games against Bath and a Sevens competition right in the middle of that first season. It was ballsy really, from a Wigan point of view.” 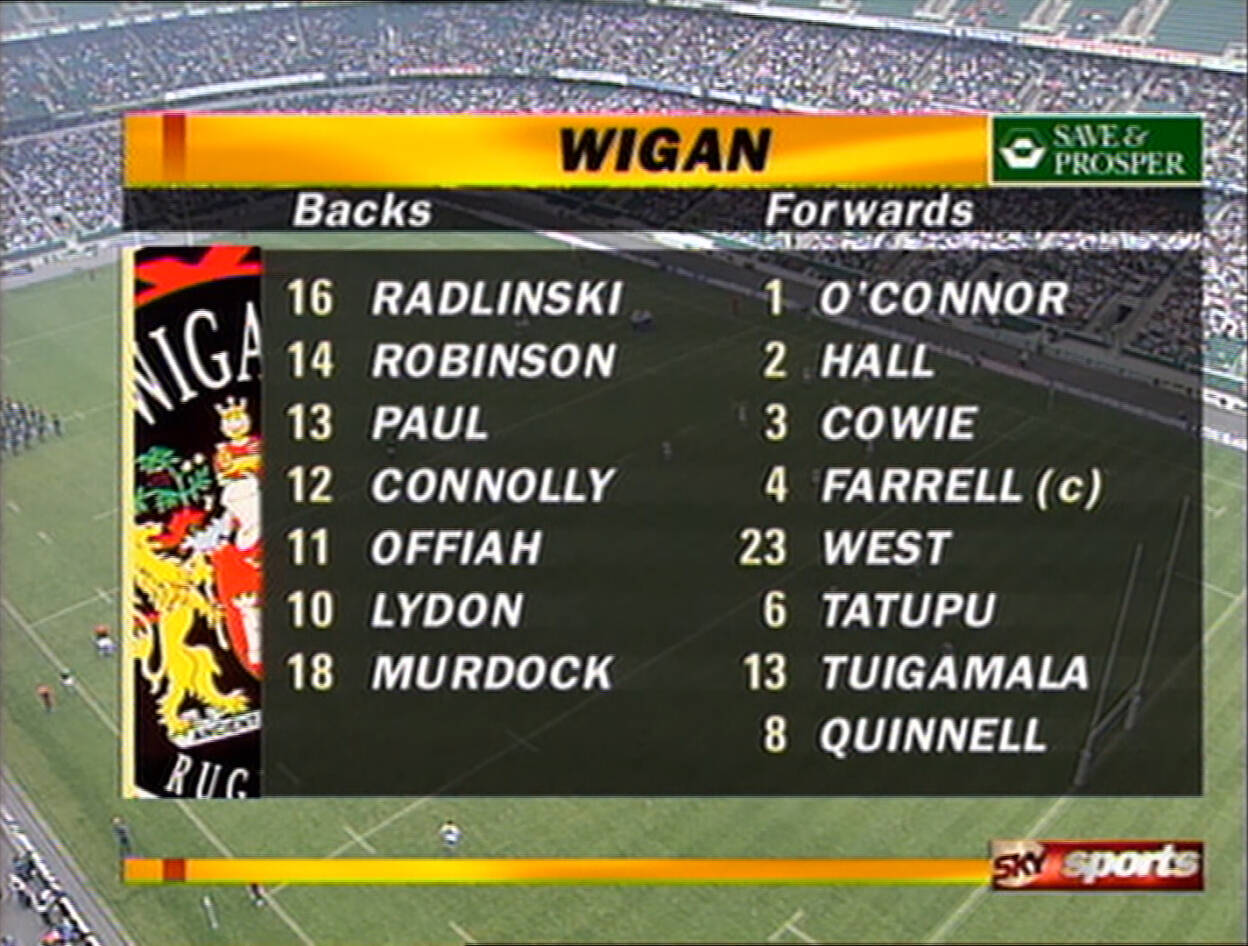 After making further history by claiming the Middlesex Sevens at Twickenham, Wigan returned to London a couple of weeks later for the renewal of battle lines with Bath under union rules. It was, in many ways, a completely different ball game.

Farrell explains: “It’s the unknown and that’s what the scary thing for us was. I suppose we were lucky we had the Sevens as well, so we had a little bit of a feel for Twickenham, but it’s just completely different. Bath had as many scrums as they possibly could and just drilled us and drilled us and drilled us. They took their foot off the gas in the second half but still were comfortable winners, 44-19.”

Catt, who pulled the strings at out-half and scored one of Bath’s seven tries, continues: “At least we won it, because there were a few boys after that Maine Road game thinking, oh my God we better turn up for this one. That’s why we picked and went, the forwards just went straight through you guys.

“The whole cross codes thing was special. The fear, I’ve never felt fear like that before the first game, I didn’t think I could to be honest. It was a hell of a takeaway from that first game. It was brilliant and we came out of it unscathed and part of history.”

Coming away from that Twickenham showdown with a greater appreciation for union and a new-found interest in the code, Farrell – who captained Wigan in the second game in the absence of Shaun Edwards – would go on to be appointed the club’s permanent captain later that summer and, at 21, would then become the youngest-ever captain of Great Britain.

“I always remember the Twickenham game because Henry Paul, Gary Connolly, Martin Offiah, Scott Quinnell, Jason Robinson, myself and Shaun Edwards all ended up in union and that was my first feel of it. Obviously I watched it but it was my first game and I also think it was the first time I captained Wigan. It was a big thing for me because after that I certainly appreciated the game [of union] more and wanted to understand it. I was intrigued by it from that day on.”

When he made the switch to union in 2005, Farrell would cross paths with Catt again. The pair became England team-mates and were part of the 2007 World Cup squad together, before continuing their relationship into coaching, firstly with England under Stuart Lancaster and now with Ireland.

“I watched Andy coming through the ranks,” Catt says. “That Wigan team was phenomenal and then Faz going up through the ranks and what he achieved and then switching over to union coming to Saracens. He had a bit of a stop-start beginning in union with his back and all that sort of stuff but then we got into the 2007 World Cup together.”

“We were both hanging on in by then, weren’t we Catty?” Farrell laughs.

“Yeah, we had a blast and then worked with England and now Faz has very kindly got me on board now. It has been crazy really,” 48-year-old Catt adds.

Looking back on that memorable period in their respective playing careers for the first episode of the IRFU Rugby Stories series, both Farrell and Catt have enjoyed getting the opportunity to take stock and reminisce during this period, particularly with their younger kids.

“Faz has got Gabriel and I’ve got Alice and they’re both eight or nine years old and obviously they weren’t around at that sort of time so it’s actually quite nice to sit down with them,” Catt continues. “And they’re sort of watching the game going ‘Is that you? Is that Gab’s Dad? Is that Andy?’. It’s quite nice to reminisce a bit with them as well.”

Farrell agrees: “It is nice and because of the lack of live sport on TV somebody is always texting you saying, oh that game is on from back then. I don’t know why but I’ve always been one to just go onto the next game or I’ve never really looked back on a season or achievements. But what has been good about watching these games back, I’m watching them again almost for the first time so I’m enjoying them like it’s live.

“And with Owen, he would have seen all that at the time and that would have been great for him to see a career but for Gabriel, I’d be teaching him something on the beach or throwing a ball around in the back garden and then obviously he’d watch me on TV and then he’d go ‘oh you could actually do it yourself, could you?’ I don’t think he actually believed me when I was trying to teach him!”

Overall, Farrell remembers the friendships and connections he made during those two games as league and union met for the first time.

“The thing that sticks out for me now is the connections that we made because of it,” the Ireland Head Coach adds. “The amount of players who went over to rugby union, 100% they would have been influenced by those occasions. When you look back, myself and Catty, our careers have crossed tremendously over the last 12 years.

“And Andy Robinson got man of the match in the Twickenham game and he was the England coach who signed me into rugby union, so the connections were absolutely huge from a couple of occasions like that. They were brilliant times.”