Background: Andy studied at the University College Plymouth Marjon and has a BA in Sports Science and Coaching with Outdoor Adventure. Moved to Ireland to play and coach rugby. Played with Old Crescent and won the 2012 Emirates Cup of Nations representing Belgium.  He also represented Belgium in Sevens. 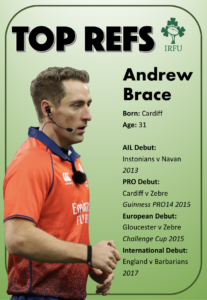 Munster Referee of the Year 2014

“I don’t want to be in a position where I’m in the moment and start worrying about my mind, thinking whether that was the right penalty or not. All of that has to be instinctive, but it becomes instinctive through maintaining high level training so that I can go out and ref naturally. So my advice would be come to every game prepared, don’t overthink too much and try to cut the clutter.”

Background: Played rugby with St Munchin’s College and with Bruff RFC.  Represented Limerick in hurling.  He has a Masters Degree in International Relations and worked for the Revenue Commissioners before refereeing full-time. 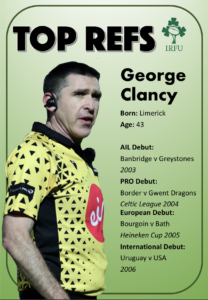 “Be resilient. Refereeing can bring great high and lows. It’s important to manage the tough days at the office, learn from them, and come back stronger!”

Background: Played with Navan RFC and refereed his first game at the age of 15 – a quarter final of the Anderson Cup between his home club Navan and County Carlow. 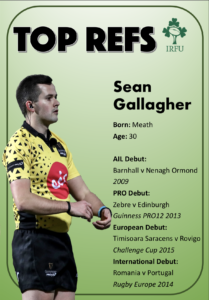 “There are great support structures in each province for those who would like to take up the whistle. We look for a wide range of people to become involved in refereeing – from those who would like to referee age-grade matches in their local area, to those who aspire and have the ability to progress to the higher levels of the game. If you have an interest in becoming a referee, my advice is to contact the IRFU Referee Development Manager in your province.”

Background: Frank started playing Rugby at Crosshaven RFC, later attending CBC Cork winning a Munster SC. He would go on to represent UCC and Cork Constitution before turning pro and playing for Munster, Leicester Tigers and Connacht.  He won a Premiership and EDF Cup title with Leicester and played eight times for Ireland A, as well as representing Ireland vs The Barbarians in 2008 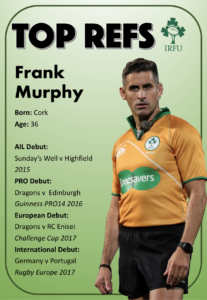 “For any ex players thinking about refereeing I cannot recommend it highly enough. It continues to be an exciting journey for me through the ranks and back into the pro game, but more than anything it got me back on the pitch involved in a game that I love. Id encourage anybody to get out and give it a shot, you’d be surprised how much you’ll enjoy it.”

Background: Joy played her rugby with Shannon and then UL Bohemians. She won 70 caps for Ireland winning a Six Nations Grand Slam in 2013 and playing in two Women’s Rugby World Cups (2006 & 2010) 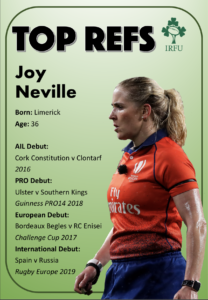 “Embrace your mistakes instead of seeing them as a negative.  WE ARE HUMAN, WE ARE GOING TO MAKE MISTAKES! If we do not embrace our mistakes and understand the WHY, why they happened, then we prevent further learning and allow for the same mistakes to be repeated”